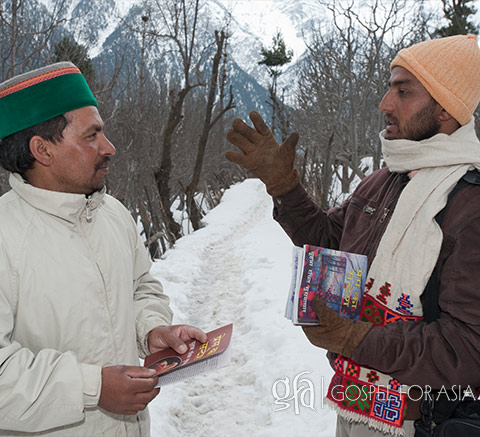 Because he received a blanket and jacket, Sutram (not pictured) is able to continue his ministry no matter the weather.

Sutram huddled in his home near their source of heat. Outside his house, freezing winds and frosty temperatures prevented the GFA-supported worker from ministering. Sutram earnestly desired to bring news of God’s love to those around him, but it was too cold to venture outdoors—much too cold.

Struggles from the Past

Sutram lived with his wife and two children in a mountainous region of Asia where he used to work as a coal miner. He came from a large family who had always been poor, and now he and his wife and children lived in poverty as well.

When Sutram came to know Christ while temporarily working in another country of Asia, he felt joy and passion in abundance. He returned home and joined a church led by GFA-supported pastor Purnendu. Sutram participated in every church activity with such enthusiasm that Pastor Purnendu encouraged Sutram to do ministry fulltime. Sutram readily agreed, and in 2018, Sutram began taking God’s love to communities around him as a GFA-supported worker.

Sutram threw himself wholeheartedly into his calling, actively venturing out to bring the love of God to those who likely had never heard of Jesus before. But a major hindrance to Sutram’s ministry soon became apparent: winter.

The Need for Winter Clothing

Living in a mountainous region meant that during the winter, temperatures can drop well below freezing. As a poor coal miner, Sutram had always struggled to provide for his wife and children. Now as a full-time ministry worker, he directed his humble earnings toward educating his children. There had been no money left for Surtam to buy warm clothing for himself; all he had was a thin sweater.

Despite this hardship, Sutram never wavered in his faith. He remained grateful for the privilege of serving God even in the cold. But when the frosts grew especially intense, he eventually had to remain indoors instead of going out to minister. Sutram continued to lift his needs before the Lord, asking for a way to care for his family and fulfill the calling God had given him.

Sutram’s prayers were answered mid-winter when Pastor Purnendu presented him with a warm blanket and jacket! Now, Sutram’s ministry can continue unimpeded while his family is also provided for.

“I am extremely glad and thankful to my God and leadership for the precious gifts,” Sutram says. “The [blanket and jacket] I received was beyond my expectation. It has been a great blessing for me and my family.”

Read more about GFA-supported workers who were blessed with blankets and winter clothing.

University of Haifa researchers crack the code of...

In his near-death experience of hell, he saw...