Top Posts
God Saves Your Tears in His Bottle
Overcoming Common Misconceptions and False Assumptions
Character-Building Dilemmas
Set Your Heart on Things Above
The Power of Facilitating Partnerships and Collaboration
When We Don’t Feel Worthy
Vision For One Billion Souls By 2030 Unites...
Middle East Christian Converts Receive Bullet Death Threats
The World Needs More Audras
The Significance of the Seventh Man
Home ANS Feature A Trek For Her In-Laws

A Trek For Her In-Laws

Wills Points, USA (ANS) – With an hour’s walk through hilly terrain, Raiza had ample time to think. She had been hesitant to make the journey. Would it be worth it for a blanket? Would it just be a thin, unsubstantial piece of material? Would the church even have enough? 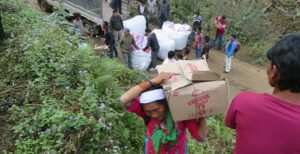 When their vehicle could travel no farther, GFA missionaries, aided by locals, carried distribution items by foot the remaining distance to the village.

But then Raiza had thought of her frail in-laws. Any additional layer of warmth would benefit their old bones and help protect them from the cold and its ailments. It might even save their lives from winter’s bite. She could only hope her expedition would be successful.

Raiza lived in a remote village with little development and high illiteracy rates. They had nearly no access to services such as clean drinking water, electricity, education or health care. Living below the poverty line, most of the people in her village relied on gathering wild vegetables and raising corn for sustenance.

But the poor soil of the mountainous region produced little and made farming difficult. Situated in one of the poorest countries of the world, outdated farming methods inhibited progress out of poverty. Their village’s remoteness further complicated any efforts of development or transportation of resources.

To survive, many people traveled to other regions to find work and sustain their families. Raiza’s husband, Soryn, was among them, working as a daily laborer in construction and coming home only once a year. Though he hated to leave his wife, their two young daughters and his elderly parents, he had no other option. Their poverty and the scant opportunities in their remote village demanded it.

A Fight Against the Cold

Raiza bore the responsibilities at home, caring for their home, their daughters and her in-laws. Times were especially difficult in winter, when temperatures among the foothills of the Himalayas would often fall below freezing. The majority of houses in her village were simple structures built of mud, hay and bamboo that offered little protection from the elements. To stay warm in winter, families would gather around a small fireplace in the middle of their single-room dwellings.

Many of the 689 million people worldwide who live in poverty lack access to adequate winter supplies.

In undeveloped villages like Raiza’s, electrical heat is often non-existent. People may pile on layers of old jackets and worn blankets in an effort to stay warm. They frequently have difficulty sleeping as nighttime winds slice through their thin walls. Outdoor movement is often limited to the hours when the sun is high enough to add its warmth.

The majority of houses in her village were simple structures built of mud, hay and bamboo that offered little protection from the elements.

Without adequate shelter or clothing, their exposure to the cold increases their health risks and makes them more susceptible to sickness as their immune systems are compromised.

This risk is even higher for the elderly, including Raiza’s in-laws. While contributing to heart problems and other health risks, prolonged exposure to even mild cold can cause hypothermia in older adults.

And if they were to get sick, Raiza’s remote village lacked basic health care even if they could afford it.

Perhaps Raiza had to pull herself out of bed that morning. Perhaps the early hour or the distance before her discouraged her from even beginning her trek. But she knew she must brave the journey.

In the neighboring village, a group of GFA missionaries led by Pastor Meshach began to arrive. When their vehicle could go no further because of the terrain, the team trudged the remaining hour on foot. Aided by locals, they bore loads of love and warmth up the hill to their remote destination.

“We are so happy to help you with a warm blanket, sanitizer, mask and soap in this winter season,” Pastor Meshach told those gathered. “The ministry of [our church] is to show love, help and compassion to the suffering, poor and needy people. The Lord Christ has also taught us to do so. … Accept these items as the love of our ministry as well as the love of Christ.”

Approximately 100 families and individuals, including Raiza and many elderly people, received gifts from the distribution. The practical gifts from GFA missionaries brought hope and warmth. Thanksgiving and joyful hearts, including Raiza’s, abounded. She could scarcely believe her eyes when she beheld the beautiful, thick blanket she received!

“I never received such a thick and warm blanket [before],” Raiza exclaimed. “Today, [the church] has filled my heart with joy and happiness by giving me this blanket.

“I did not have such kind of blanket at my home, and I was unable to buy [one]. We all were surviving this excessive cold with old blankets. Especially, my in-laws were facing difficulty to spend the night. … I thank [the church] from the bottom of my heart for this warm and thick blanket.”

Though Raiza returned home with the load of her gift, her heart was light. The weight of this blanket would ease winter’s burden for her family. Her in-laws and young daughters would be warm, protected from the cold and ailments it might bring. They could sleep soundly and awake rested. This blanket’s warmth, both physical and emotional, could change their lives.

“I never received such a thick and warm blanket [before]. . .Today, [the church] has filled my heart with joy and happiness by giving me this blanket.”

There are many people like Raiza living in remote, mountainous regions who are still in need of warmth. Every winter, they suffer through the cold, perhaps hoping they’ll survive.

One man, Bandi, shared some of their struggle.

“Poverty has bound us for a long time, and we are unable to escape from it,” Bandi said. “Every year we bear excessive cold without warm clothes, and we become prey to skin diseases. When we think about our lives, I ask myself, why are we on the earth and how long should we have to bear the pain?”

They can’t afford to buy sufficient clothing or blankets with their scant incomes. Often, they can barely feed their families. For many, the strain of the COVID-19 pandemic has plunged them even further into poverty.

People like Raiza are willing to walk an hour just to receive a blanket. A warm blanket or a winter clothing packet can be life-changing for those in need. It protects from the cold and from sicknesses. A blanket enables the bearer to rest well rather than shiver through the night. Winter clothing enables workers to work and children to study.

Given with Christ’s love, these gifts also show recipients the care and love of the Father. They can represent hope, health and life.