Top Posts
The Jesus Movement and Contagious Faith
Christian Product Expo underway in Lexington
Advanced Writers and Speakers Association announces winners of...
God Saves Your Tears in His Bottle
Overcoming Common Misconceptions and False Assumptions
Character-Building Dilemmas
Set Your Heart on Things Above
The Power of Facilitating Partnerships and Collaboration
When We Don’t Feel Worthy
Vision For One Billion Souls By 2030 Unites...
Home Author
Author

GFA World Summons Next Generation to ‘Fight Back’ Against ‘Chaotic’ Culture

written by Gospel for Asia

Wills Point Texas (ANS) – One of the largest mission organizations in the world is challenging the next generation of young Christians to “fight back against the cultural attack on your faith” — as recent research shows an alarming drop in the number of under-30s embracing Christianity. 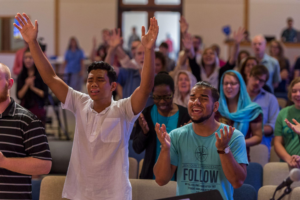 As young Americans abandon their faith in alarming numbers, GFA World (www.gfa.org) is hosting the Kyrie Experience in October.

From October 8-10, GFA World (www.gfa.org) is hosting the Kyrie Experience, a retreat at its Wills Point, Texas, campus — 50 miles east of Dallas — that aims to help young people “reset” their lives in a “chaotic culture” and discover their God-given purpose in the world. A radical call to step away from the busyness of life and seek God, the event draws its name from the millennia-old prayer, “Kyrie Eleison” – Lord have mercy.

“Staggering numbers of young Americans who’ve grown up in a Christian environment are leaving the faith and turning their backs on the church,” said GFA World founder, K.P. Yohannan, author of Revolution in World Missions with more than four million copies in print.

“They’re under the constant bombardment of distractions that keep them from God’s presence and His will for their lives.”

According to a Gallup poll published earlier this year, for the first time less than 50% of Americans view religion as important to them, and only 36% of Millennials — those born between 1981 and 1996 — belong to a church.

A report by Barna research last October revealed only 10% of 18–29 year olds — Millennials and Gen Z, those born between 1997 and 2015 — who grew up in a Christian home or going to church were considered true Christian adherents, or what Barna defined as “resilient disciples.”

Hand On The Exit

Nearly four in every 10 of the 18–29 year olds who grew up going to church — a group Barna label “habitual churchgoers” — have “their hand on the door” and were “ready to leave the church if they do not find the connection and support they need during the pandemic.”

“Right now, ministry leaders have the opportunity to help Millennials and Gen Z realize how the silence and solitude of the current moment can be leveraged to deepen their spirituality and encourage resilient faith,” Barna’s report said.

“It’s clear that in our chaotic culture young Americans want a real experience of God,” said Yohannan. “GFA World has always been about equipping young people to impact their world with Christ’s love, even as they have experienced it for themselves.”

“More than ever, young people need to be effectively equipped to deal with the seductive and spiritually debilitating forces of our consumer culture.”