She was molested her entire childhood by a girl – a best friend and church deacon’s daughter – who acted out her grandfather’s nasty secrets.

A preacher’s kid from a small town, she grew into a role model for teens – a strong leader who was destined for ministry on a large scale, despite the painful secret she kept from everybody. Upon graduation from high school, people in her town suggested – only half jokingly – she might be the future leader of Focus on the Family.

As a 23-year-old youth pastor with credentials from the Assemblies of God (AG), she was the featured speaker at a purity conference for teens who had gathered in the Rocky Mountains. On the eve of her talk about abstinence and saving oneself for marriage – Easter Sunday 2004 – she was violently and randomly raped in a small town with its world-renowned Christian retreat center.

In her third year of full-time teen ministry at a Denver church, Jessica Joy (Neely) spoke convincingly of God’s design for marriage and sexual purity at the conference, but inside she was seething with anger over her fate on the asphalt the previous night.

“I was determined to be liberated from God,” says Joy.

Those traumatic sexual experiences set the stage for Joy’s slide into eight years of bondage in the commercial sex-trade, beginning as an escort in Denver.

Her first journal entry as an escort included the words of Jesus recorded in Mark 8:36: “What does it profit a man to gain the whole world, yet forfeit his soul.” (Berean Study Bible).

Today, Joy fights legislatively against pornography, a vice that – with its seductive lure of cash – destroyed her soul. 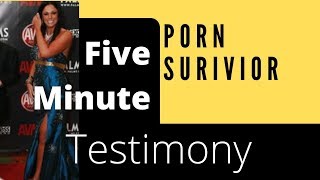 In 2008 the stock market crashed, and so did Joy’s relationship with her missionary parents who learned their daughter – at 27-years-old – was producing pornography, running a house of girls in Denver and cavorting with unscrupulous men.

A year later, Joy moved to Hollywood after signing a contract “with the most glamorized sex-trafficking ring in the United States,” replete with drugs, cash and underage girls, she says.

Having lost her soul in the sex trade, Joy ached for the life she enjoyed before that night on the asphalt. But “normal” eluded her and, after several attempts at suicide, Joy started a national escort service, employing girls in multiple states.

In 2013, Joy found herself staring down the barrel of a 30-year prison sentence on felony sex-trafficking charges.

With 5,000 cell-phone contacts at her disposal, Joy connected with a pastor who called her sanity back into order, insisting that she accept an offer of help into a Bible-based recovery program for victims of sex trafficking.

“A church of 25 people stepped into my life, got me into a program, and became love that rolls up its sleeves and gets dirty,” says Joy.

Refuge For Women, a non-profit, faith-based organization that provides long-term, specialized care for women who have escaped human trafficking or sexual exploitation, helped Joy return to the “normal” for which she longed.

At a Refuge For Women location in Kentucky, Joy was also introduced to Celebrate Recovery, a Christian 12-step program. She also volunteered for a short time at the Atlanta Dream Center, which referred many girls to Refuge For Women for recovery.

For Joy, healing from childhood sexual trauma and post-traumatic stress through Refuge For Women and Celebrate Recovery led her to again consider ministry. She explored an organization that has a strong anti-porn message, and another that focuses on rescue and recovery from sexual exploitation.

But finding two major ministries weren’t the Lord’s plans for her or them, Joy discovered instead the value and discipline of modeling Jesus’ servant-hood through something as “normal” as delivering pizzas. “It helped me to walk out my true identity in Christ as I happily delivered thousands of pizzas,” she said.

In 2016, sought-out doors to speak opened for Joy, who devoted full-time to sharing with groups large and small her recovery from sexual exploitation. At the same time, she was introduced to law and legislation protecting minors from pornography through internet filters.

“So I was introduced to pornography filter legislation a couple months later on Nov. 8, 2016, and I was like, ‘oh, my gosh, this is it,’” says Joy, who at the same time decided to write a book that’s still in process.

Joy has testified in favor of restrictions on access to pornography, which offered riches at the expense of her soul.

As the 2020 legislative sessions begin at statehouses across the country, Joy says 17 states have passed resolutions declaring pornography is a national health emergency, and in 36 states porn-filter legislation protecting minors has been introduced. At some of the hearings, Joy offered firsthand testimony of porn’s destruction of its producers and consumers.

“When I was introduced to legislation, if you had seen my face, it looked like a prisoner’s set free,” says Joy who, in addition to testifying at porn-filter hearings, has lent vocal support to religious freedom, pro-life, gender- and sexual-orientation issues.

Instead of remembering defeat on the asphalt Easter Sunday 2004, Joy focuses on resurrection – her own and that of the Lord Jesus. “I made a choice to rise from the ashes,” she says, “and declare his victory.”