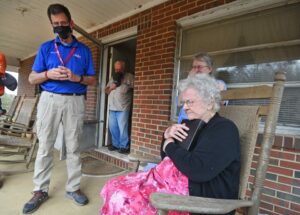 A local resident clutched her newly gifted Bible after talking with Billy Graham chaplains about faith and having her damaged home repaired by Samaritan’s Purse volunteers.

At least five people were killed in Thursday’s tornadoes and widespread damage to homes, trees and power lines was reported.

“The state of Alabama was still reeling from last week’s tornadoes and now to get hit with another destructive storm system has a lot of people hurting and overwhelmed,” said Josh Holland, assistant director of the BG-RRT.

“Our crisis-trained chaplains want to be there to visit with people, allow them to share their experiences and to share the hope and peace that only God can provide.”

In addition to the five tornado deployments in Alabama and Georgia, BG-RRT chaplains are also serving after historic flooding in Breathitt County, Kentucky, and in Boulder, Colorado, after a mass shooting at a grocery store.