Top Posts
Knowing the One Who Always Keeps His Word
Pregnancy Resource Centers Fight For Life Amidst Opposition
This World is Not Our Home
Lessons Learned From a Gingerbread House
Let There Be Peace on Earth
‘I Wanna Dance’ movie: Whitney Houston’s success and...
Fact Finding, Sight Seeing, and Prayer Walking
Kidney donation led to 8 life-saving surgeries
The Power of Curiosity
When Love Came Down at Christmas
Home ANS Reports Commentary: Navigating new realities in Israel

JERUSALEM, Israel (ANS) “We used to say life in Jerusalem is not boring; every day something is happening. But the recent events have shaken a city even as unpredictable as this one, with major implications for multiple areas of our lives,” says  Dr. Salim J. Munayer, Executive Director, Musalaha Reconciliation Ministries.

In a recent ministry update, Munayer highlighted some of these changes which will affect the work of reconciliation in Israel. 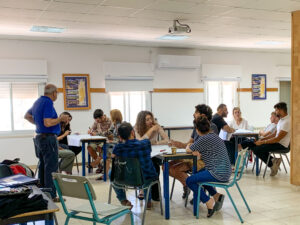 “In the last few years, many thought that Israel had successfully marginalized the Palestinian ‘problem’ domestically and internationally,” Munayer said. “However, now it is again at the forefront of the political agenda and media. This is a major blow to Israel’s strategic plan as pursued by former Prime Minister Netanyahu, who had been in power for twelve years. The new government will have to choose different strategies in order to address the conflict.”

Munayer says the dominant local voices in recent events are that of Palestinian young adults in East Jerusalem.

“Young Palestinian men and women are refusing to accept either the occupation or the passivity of the Palestinian leadership in Ramallah. They are taking the lead by organizing mostly nonviolent protests and activism, which is often met with police brutality. These young adults wish to change the dynamic inside Palestinian society and the balance of power within the conflict.”

The Palestinian citizens of Israel, especially those living in mixed cities, such as Jaffa, Haifa, Lod, Ramle, among many others, have suffered from discrimination in virtually every aspect of their lives. The events in Jerusalem sparked violence between the Jewish and Palestinian residents of these cities and further complicated the relationship between them.

“After four elections in two years, major shifts are happening in the country. Palestinian citizens of Israel have voted mostly for the Joint List of Arab parties. In his quest to stay in office, Netanyahu made ‘kosher’ an Arab lawmaker to be part of the government – Arab parties are now a force to be reckoned with. As such, for the first time in history, a Palestinian-Arab party will be in the coalition. Moreover, a radical right-wing Jewish party has gained enough votes to sit in the parliament, which has illuminated the increase of far-right voters,”’ Munayer said.

“The violence, especially in mixed cities, has further divided Palestinian and Jewish citizens. At the same time, large segments of society are attempting to build bridges and counter hatred. There have been a number of protests and joint initiatives in the spirit of cooperation and dialogue.

“The division in Israeli society between religious and secular is evident and growing. As a result, it is escalating the division and fragmentation of society.”

Munayer continued: “On the one hand, the fragmentation of society can lead to further violence and hatred. On the other hand, it can be an opportunity for new engagement between different segments of society. Some people may meet challenges to their worldview with denial; others might attempt to restore the old framework and resist any change. But still, others will seek to understand their new reality by questioning previously held assumptions. This last approach requires a great deal of courage as the path of self-reflection is never easy. In order for society to deal with these changes productively, there needs to be an intervention.”

Munyaer concluded by saying: “We at Musalaha see this fracture as an opportunity. Many organizations are joining us in this quest for change, as evident in the many joint initiatives we have undertaken since the dramatic events of last month.

“In order for these initiatives to have a real impact, we provide the platform for more permanent, fundamental change. It is precisely the work of reconciliation that turns good intentions into long-lasting transformation and healing.”