Top Posts
Knowing the One Who Always Keeps His Word
Pregnancy Resource Centers Fight For Life Amidst Opposition
This World is Not Our Home
Lessons Learned From a Gingerbread House
Let There Be Peace on Earth
‘I Wanna Dance’ movie: Whitney Houston’s success and...
Fact Finding, Sight Seeing, and Prayer Walking
Kidney donation led to 8 life-saving surgeries
The Power of Curiosity
When Love Came Down at Christmas
Home World MissionsPersecution Eight Iranian Christians arrested in morning raids

IRAN (ANS) — Eight Iranian converts to Christianity, including five from one family, were arrested at their homes in a coordinated operation carried out by Ministry of Intelligence agents on July 1.

BarnabasAid reports the officials swooped at about 9 a.m. in the south-west city of Bushehr and seized Bibles and other Scriptures, laptops, phones and identity and bank cards. Agents also searched the workplaces of at least two of the Christians and took away computer hard drives and security camera footage. 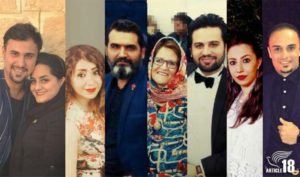 All but one of the eight Iranian Christians arrested are being held in solitary confinement [Image source: Article 18]

Khatoon Fatolahzadeh, arrested after agents in six cars came to her house, was released the same day because of her age. The rest are being held in solitary confinement and without access to lawyers at the Ministry of Intelligence office in Bushehr.

BarnabasAid says two months ago, on May 9, Iranian agents shut down a 100-year-old Assyrian church in Tabriz, north-west Iran, and tore down its cross.