During the week, a music director at a Spirit-filled church in Colorado prays for and plans worship services where people encounter Jesus on Saturday and Sunday. But now he’s negotiating with producers who have expressed interest in rights to a documentary film that recently premiered before a nearly sold-out theater of mostly Christians.

Several distributors and platforms are interested in obtaining rights to the film if the parties come to terms on a deal.

In appreciation for his music director’s commitment to providing life-changing worship and playing keyboards on weekends, the pastor of Rez.Church, Jonathan Wiggins, recently encouraged his followers to support 27-year-old Marcus Lee’s most recent creative endeavor: a full-length feature film. And they did with money and time, paying full-price for tickets to the film’s debut.

Searching For Saint Joseph (SFSJ) documents Lee’s meeting the father he never really knew until 2017. Written, produced and funded by Lee, a mixed-race ministry school graduate, the film highlights the first face-to-face conversation he remembers with his father two years ago. It’s full of drama, surprises and concrete facts about fatherless America.

During two years of research and production beginning in April 2017, Wiggins lent spiritual support and creative advise to Lee, a mixed-race son of a single Caucasian woman and an African-American man who wasn’t around for his son’s birth in 1992.

Impressed with the finished product, Wiggins encouraged ticket sales for the film’s premier this spring at a historic downtown theater in Loveland, one of three Rez.Church worship campuses.

“I support him in particular because, normally, a young man’s father would invest in and help his son achieve his dreams,” says Wiggins, who started in ministry leading worship with his father in Louisiana. “Marcus is just now connecting with his dad, so I thought I could step in and help as a friend and mentor.

“His story is very compelling and relatable. I can’t wait for the whole world to watch his story unfold,” Wiggins says.

Lee is invested in making progress in relationship with his father, and in distributing the documentary to wider audiences through film festivals, mass media distributors, and producers – if they can strike a deal. “The things they want to re-enact, they would re-enact; the things they want to change, they could change, so we’ll see,” Lee says.

The Indie-produced documentary is just one aspiration for Lee, who recognizes he’s not the only Millennial who grew up without a father, or still doesn’t know a biological dad.

“It’s like a fill-in-the-blank sheet. You can insert yourself into this story through the lens of my journey if it applies. But the lasting impressions I want to leave are grace, forgiveness and redemption. That’s really all I wanted when I set out on this story – a real life story of redemption,” Lee says.

Beyond the film’s debut, which garnered grateful online reviews at its website searchingforsaintjoseph.com,and packed the City of Loveland’s Rialto Theater, Lee envisions ministry to Gen Z youth growing up in homes headed by single moms like the one he remembers.

A ministry school graduate whose favorite chapter in the Bible is Luke 15 – Jesus’ parable of the lost sheep, the widow’s lost coin and prodigal son’s return home – Lee envisions a non-profit, Saint Joseph Foundation, providing scholarships to students and financial assistance for expectant mothers through Saint Joseph’s Hospital in Phoenix, where he was born.

Lee chose the title SFSJ before meeting his dad, whose middle name is Joseph. Saint Joseph is an honored patron of fathers and families within the Catholic Church.

“My highest goal beyond the film is a huge topic right now, and that is abortion. It has been for as long as I’ve been able to say the word politics.

“You can be as pro-life as you want but if you’re not actively doing something – I might get some heat for saying this – you’re pro-birth, not pro-life,” says Lee, whose mother didn’t consider aborting him.

Lee’s ministry vision is to connect single women and mothers of unwanted children with families looking to adopt, and providing financial assistance to them if it means saving a child’s life. “My biggest goals are to provide a better shot at life with a strong dad and mom in the home.

Going into production of SFSJ, Lee did research of United States Census, Labor and Statistic Bureau information focused on Millennials. He discovered 24 million youth like himself grew up in single-parent families. About 43 percent lived with one parent, usually the mother. And, for black families with third- to 12th-grade school youth in the homes, the number jumped to 72 percent.

Statistics for teen pregnancies, runaways, suicides and incarcerations are all in the 80- and 90-percentiles within fatherless homes.

“I had a lot of other young black friends who have the same stories; and we all turned out very different,” he says.

Without giving names, Lee thinks of two people he grew up with, contrasting their lives. “I love my life. I love my job. I love the community of people I’m around. I’m thriving. I’m part of a church that I love, one that’s actually making an impact in the world,” he says.

One of Lee’s friends is lukewarm in his faith– not really in danger of falling away but he isn’t living life to its full potential in God. “And then I have another example in mind of a guy who is in jail all the time – multiple kids with different women – not married to any of them. He’s getting kicked out of places because of rent money, spending it on drugs instead,” he says.

For Lee, outside influences made a huge difference in his life. “I am lucky. I don’t think that, by any of my own doing, did I manage to have a quality of life that I do have.

“It is purely because other people around me took an interest in me, and invested in me.

“A lot of that came from being involved in church and a church culture – like for the most part a healthy church culture – where you’re surrounded by people who genuinely care about you. I think that is what saved my life,” says Lee, whose mom expresses pride in her son’s achievements.

His dad, on the other hand, has not see the documentary, but he recognizes Lee’s musical and film-making talents in phone calls, texts and in a short film scene. Like Lee who plays keyboards for the Rez.Church worship team, his father is also a musician. He was initially shocked when Lee contacted him with help from a private investigator, and rejected a part in the documentary; he later conceded and was filmed.

Lee’s mother was the first to learn about the documentary search for her son’s dad – followed by his pastor and worship-team peers at Rez.Church. “While it is not about her – at least not directly – it is indirectly about her because, for someone who is fatherless, there has to be a mother somewhere,” he says.

“Through tears, my mom agreed to be in the film – even if it painted her in a negative way. She said ‘I will do whatever you need me to do to help get your story out there,’ which was just an unreal response and one of the many reasons that I love that woman,” Lee says. 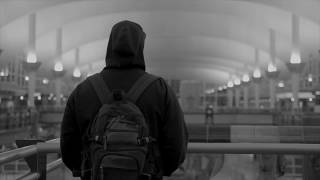 In the beginning, the film was a conversation starter with people who learned of Lee’s plans to find and film his dad. It turns out the crux of SFSJ is the opening of a door for conversation with his father, too; they’re just beginning a relationship. Father’s Day in June was the first they’ve celebrated; and upon meeting his dad, he texted Lee the words: When is your birthday?

Others tell Lee they’re planning to follow his lead after extended breaks in relationship with their biological fathers.

A head basketball coach at a Christian school says SFSJ inspired her to begin a process of reconnecting with the dad who she hasn’t seen in 18 years. “Seeing your bravery in the movie has helped me realize I can do it too,” Tina Beauvais wrote on the SFSJ website. “And, just like you, I won’t be afraid; I’ll be doing it with God’s peace. I will let you know when I do it,” says Beauvais, a staff member at Dayspring Christian Academy.

Another unidentified man says he took the first step, calling his dad despite their differences dating back to his departure at age 12.

“Thank you for the courage to show how important it is to make the effort, and how worth it it can be,” he wrote.

Lee says he wants to help others like his friend from childhood who now finds herself the single mom of a mixed-race child. “I see so much of me and my mom in their story, just wanting to be there to rescue her and her son.

“Their story motivates me to start the non-profit – of wanting to give people tangible and physical help versus saying, okay, ‘we’ll pray for you.’ I think prayer is important but actions are important, too,” Lee says.

Lee has begun writing a companion book for SFSJ which, he says, is unique. The TLC Channel airs a program called Long Lost Families but it’s different than his film. “Leading up to (SFSJ), I watched up to 10 documentaries to get a feel for what I wanted and how things might look. But I found nothing quite like SFSJ. It feels kind of cool to know that I’m opening up a new door entertainment-wise,” Lee says.

There’s more information about the movie at searchingforsaintjoseph.com, which will publicize when and where the documentary is distributed or email saintjosephfilm@gmail.com

Jeanette Chaffee – Terror in the Sky