Top Posts
God Has Plans for Your Life
Worth and Value in the Kingdom of God
Grandchildren Bring Joy and Opportunities to Our Lives
Embracing Change and Changing Lives
Dark Academia and Dead Monks
She ‘intensely related’ to Mary Magdalene character on...
The Most Powerful Thing in the World
Afghan Family Starts New Life in America
The Jesus Movement and Contagious Faith
Christian Product Expo underway in Lexington
Home ANS Feature GFA Says 9 Million Will Die in Coronavirus ‘Scandal of Starvation’

GFA Says 9 Million Will Die in Coronavirus ‘Scandal of Starvation’

WILLS POINT, TX (ANS) — It’s estimated that nine million people will die in a coronavirus-worsened ‘scandal of starvation’ this year, according to a new report marking the recent World Hunger Day. 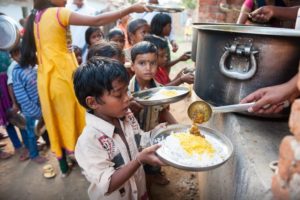 Yet astonishingly, families, restaurants and hospitals around the world will throw away $1 trillion worth of food in 2020, enough to feed one in every four people on the planet, says Gospel for Asia’s report The Scandal of Starvation in a World of Plenty.

Hunger increased around the world for the third successive year in 2018 — the most recent year for statistics — with more than 820 million people not getting enough to eat, according to the report. It cites South Asia as the worst-hit region, home to two-thirds of the world’s malnourished children.

Coronavirus lockdowns have sent unemployment skyrocketing among the poorest of the poor in many developing nations — without safety nets such as jobless benefits or stimulus checks to head-off hunger.

“The coronavirus itself is a deadly, terrible event, but more people are dying — and will die — of starvation,” said Dr. K.P. Yohannan, founder of Texas-based Gospel for Asia (GFA World, www.gfa.org) that is feeding tens of thousands across South Asia during the crisis.

‘The Extent of Hidden Hunger is Alarming’

While millions live every day with the reality of hunger, affluent nations like the U.S. waste massive amounts of food, even though almost 40 million Americans — including 11 million children — were labeled “food insecure” in 2018.

“The extent of ‘hidden hunger’ is alarming, even in wealthy countries,” Yohannan said. “Yet while the world produces a harvest big enough to feed everyone on the planet one-and-a-half times over, a third of all the food produced goes to waste. It’s horribly shocking.”

There’s a growing backlash, however, against reckless food waste. Launched in Delhi, India in 2014, the Robin Hood Army — a movement of volunteers who collect and distribute leftover food from restaurants and other businesses — has served more than 26 million meals in 150-plus cities in a dozen countries, all from “surplus” food that would have been discarded.

Meanwhile, amid COVID-19 lockdowns, local GFA churches and community teams are distributing staples such as rice. Thousands of congregations are involved, bringing food and water to migrant workers facing starvation.

More than 90 percent of India’s laborers have lost their jobs because of the coronavirus.

A GFA field worker — spotlighting personal safety in the midst of an ocean of need — said social distancing was impossible as desperate crowds descend on relief teams bringing food. “In the face of hunger, social distancing will always come second,” he said.

At one location, more than 600 migrant workers swarmed a relief vehicle. “God forbid but, if I die, please take care of my wife and two girls,” said local bishop Martin Mor Aprem Episcopa, who leads a GFA team that delivers food every day. “We know the risk we’re taking, but we must go out and keep doing what we’re doing… this is sometimes the only food they’ll get in three days.”

One grateful villager — who had been scavenging in the fields to survive — said: “We were worried and anxious, thinking about how long we would have to suffer.”

“The Prime Minister of India and government officials everywhere are doing their best to care for the poor and needy and helping our church workers to serve their neighbors,” said Yohannan. “It’s easy to be overwhelmed by the scale of the problem. But one person can make a difference. As Mother Teresa said, ‘If you can’t feed a hundred people, then feed just one.’”

“It’s as simple as the words of Jesus: ‘I was hungry, and you gave me something to eat.’”