Top Posts
‘Nothing is Impossible’ movie: Hoops, romance, second chances
‘God’s Smuggler’ Brother Andrew passes to his reward
Cultivating a Prayer, Care, Share Lifestyle
God Has Plans for Your Life
Worth and Value in the Kingdom of God
Grandchildren Bring Joy and Opportunities to Our Lives
Embracing Change and Changing Lives
Dark Academia and Dead Monks
She ‘intensely related’ to Mary Magdalene character on...
The Most Powerful Thing in the World
Home ANS Feature GFA World Spotlights ‘Other Vaccine Shot The World’s Waiting For’

GFA World Spotlights ‘Other Vaccine Shot The World’s Waiting For’

Wills Point, USA (ANS) – Millions around the world are still waiting to get a life-saving vaccine — and it’s not the COVID-19 shot, according to a GFA World press release. 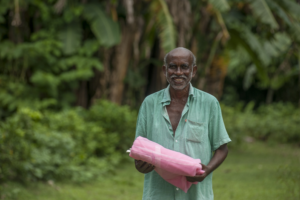 Over the past decade, GFA World has distributed more than 1.3 million mosquito nets

Human trials of a new malaria vaccine are underway, with promising initial results, according to a new report by humanitarian agency GFA World (www.gfa.org) that coincides with World Malaria Day, April 25, an annual event.

GFA World reports the quest to develop an effective malaria vaccine — a shot that could save millions of lives — has proved difficult and is still ongoing.

“Malaria is one of the most rampant child-killers in the world today,” said K.P. Yohannan, founder of Texas-based GFA World, formerly Gospel for Asia. “For countless millions across Africa, Asia and other parts of the world, an effective vaccine against malaria would be like a dream.”

But with the world laser-focused on the global COVID-19 pandemic, efforts to wipe out malaria have stalled, the report says.

Lockdowns and other restrictions have essentially halted malaria-fighting efforts in dozens of countries, leading to fears of a sharp increase in malaria deaths in 2021 — likely a death toll of hundreds of thousands in sub-Saharan Africa.

Malaria — an often-fatal sickness spread by infected mosquitoes — claims nearly half a million lives around the world every year, mostly in sub-Saharan Africa, and is “humanity’s most deadly infectious disease,” according to GFA World’s report.

The vaccine — a possible breakthrough in the hunt for an effective malaria shot — has triggered a “strong immune response” in volunteers during trials so far, producing “only minor side effects,” the report says.

Until an effective vaccine comes out, the main weapon in the fight against malaria is the insecticide-treated mosquito net.

Recent studies suggest insecticide-treated nets may be no longer as effective in some parts of the world where a new breed of “super mosquito” has built up resistance.

‘Such A Kind Of Love’

“Over the past decade, we’ve distributed more than 1.3 million nets — costing just $10 each — across Asia, and they’ve proved to be lifesavers,” said Yohannan, whose faith-based organization also stages free medical camps. “It’s one way of being the hands and feet of Christ — and showing God’s love — to those who suffer the most in our world.”

Father-of-three Baharupa couldn’t believe it when GFA World gave away mosquito nets in his malaria-prone village. “Who (would) give us mosquito nets without (asking for) money?” he said. “I’ve never seen such a kind of love.”