¡Globalquerque!: An Opulent Overload Of Amazing 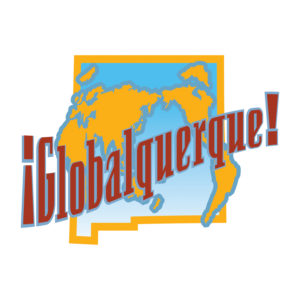 ALBUQUERQUE, NEW MEXICO— “I think she’s famous in Egypt,” the women wearing glasses from Dixon, New Mexico said to me, almost in a whisper.  Along with my wife, brother, and several hundred people, we watch singer, accordionist, and songwriter, Youssra El Hawary, perform at the Hispanic Cultural Center for ¡Globalquerque!, New Mexico’s largest world music celebration.   “I saw her perform last night on the main stage,” the woman continued, “and told myself, I need to come back and hear her again.  She may even have something to do with the Egyptian revolution,” she said with a curious smile.

The woman’s words caught my attention. 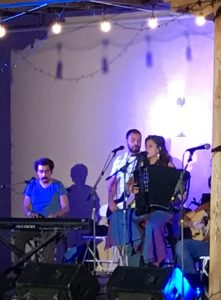 I listen to El Hawary’s performance, enjoying the songs, the musicianship (accordion, drums, keyboard, guitar, bass, recorder, bouzouki, etc.), and the stories (most about life in Cairo, Egypt: buses, relationships, and life).  I only know what the lyrics are about because El Hawary tells the audience; she mostly sang in Arabic but spoke clear English in between songs. From El Hawary stories, I knew I needed to learn a little more about her.

I caught up with El Hawary after her concert to gain insight about her music.

I ask her what she did prior to becoming a full-time musician.

“I’ve been a musician for a while.  But before committing to music full time, I was a radio personality in Egypt.  I hosted a popular program, but  left for France for two years to learn accordion.  I’ve been professional musician since that time,” she says while signing a CD for me.  We converse more. 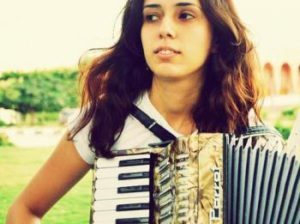 I learned that Youssar El Hawary has been writing songs since her early 20’s, tackling political and personal themes.  She found a popular audience in Egypt in 2012 when her song El Soor (The Wall) became a musical declaration concerning the Egyptian Revolution, the Arab Spring. El Hawary was also the first Egyptian to finance the production of an album through crowdfunding, releasing No’oum Nasyeen in 2017.  To say the least, her music is wonderful, as she appeared in person—petite, articulate, thoughtful, and thankful.

El Hawary, along with a contingency of  Egyptians, made the trip to the United States as part of Center Stage, a public diplomacy initiative of the U.S Department of State’s Bureau of Educational and Cultural Affairs.  Or, as ¡Globalquerque! co-founder Neal Copperman told me, “Think of the program like demystifying a particular government; it’s an exchange of cultures and creativity.  It’s a great program.  We’ve used Center Stage US for several years.” 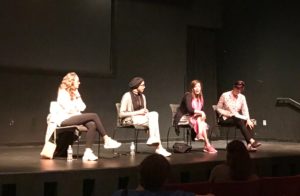 Youssra El Hawary was not the only Egyptian I was able to hear from at ¡Globalquerque!. During the day programming, I sat in on Meet The Egyptian Press seminar held in the Wells Fargo Theater, hosted by Megan Kamerick.  At the discussion, three Egyptian journalists shared insight and understanding on media practices in Egypt.  The three journalists were all woman:  Nourhan Magdi, Maha El Nabawi, and Zahra Ramy.  Answering questions posed by Kamerick, here’s some thoughts shared by the women I found interesting:

What the Egyptian women were sharing paralleled much of what we’re experiencing in the United States, a general distrust of both politicians and news.  I resonate with the description “political fatigue.” I sat in rapt interest. 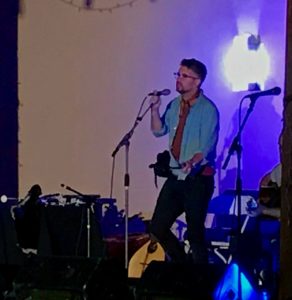 But Egypt was not the only country represented at ¡Globalquerque!.  Musicians from Turkey, Korea, Guadeloupe, Ireland, the Republic of Congo, Cuba, Mexico, Ecuador, the US, and Brazil were all present, giving ¡Globalquerque! an international atmosphere.    Not only was I impressed by Youssar El Hawary, but Irish piper Jarlath Henderson, and American Martha Redbone.  There was so much great music at ¡Globalquerque!, opulent overload was my response.

In addition to the lectures and music, movies were shown.  I was able to watch two:  Alma: Arte, Legado y Medio Ambiente (Spain), following musicians performing at a beautiful Spanish monastery, La Ribeira Sacra in Galicia, and Hombre de Barro (Columbia), shadowing musicians as they record music in the Amazon.  I was particularly thankful of the movie Alma for introducing me to Portuguese Fado singer, Cristiana Aguas. 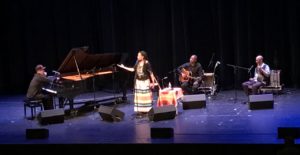 .I could go on about the event, but I won’t.  All I can say is that ¡Globalquerque! is a little slice of heaven:  music, merriment, food,  fine fellowship with people from many nationalities—all in the Duke City.  In a day an age of cynicism, it’s nice to celebrate.  And ¡Globalquerque! helps in the festivity more than most, “building,” as ¡Globalquerque!  co-founder Tom Frouge, said, “bridges, not walls.”

A Review of Albuquerque’s ¡Globalquerque! Cultural Celebration ALBUQUERQUE, NEW MEXICO— “I think she’s famous in Egypt,” the women wearing glasses from Dixon, New Mexico said to me, almost in a whisper.  Along with my wife, brother, and several hundred people, we watch singer, accordionist, and song