Wills Point, USA (ANS) – With the number of COVID-19 cases in India surging past five million and climbing rapidly, ongoing hunger relief efforts continue to stave off starvation across pandemic-ravaged Asia, according to Gospel For Asia.

In some areas, hunger is forcing people to take the most extreme measures. One man was captured on video apparently eating a dead dog off the road. 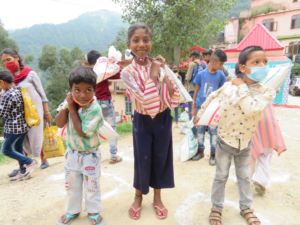 “The situation on-the-ground right now is utterly desperate,” said Dr. K.P. Yohannan, founder of mission agency Gospel for Asia (GFA World, www.gfa.org). “We’re doing all we can to bring relief and as difficult as it is, compassion will triumph in the end.”

Partnering with Believers Eastern Church in Asia and local officials, the Texas-based ministry — one of the biggest faith-based organizations alleviating poverty in Asia — is distributing food kits to more than 70,000 families on the edge of starvation.

With the recent COVID-19 surge catapulting India into second place behind the U.S. in confirmed cases, parents in the world’s second-most populous nation and across Asia face the near-impossible task of feeding their children, amid total loss of income.

“The situation in our village is terrible,” one parent told GFA World workers. “We don’t have any work and are unable to provide food.” In Asia, sudden loss of employment can be catastrophic because families typically don’t have savings, welfare, or stimulus aid to fall back on.

“We’re helping the most marginalized and at-risk people in the whole of Asia, including thousands of daily laborers who have no work because of the pandemic,” said Yohannan, a renowned missionary statesman and author of Revolution in World Missions, with nearly four million copies in print.

Like millions of the poorest of the poor, Nikita’s parents scavenge for recyclable materials and survive, literally, on scraps. During the pandemic, their work has dried up — and the family might have starved if they hadn’t received a food package.

The father of a student at a GFA World Bridge of Hope children’s center said their package was a lifeline. “The lockdown totally affected our survival and we were broken,” he said. “(This food) keeps us surviving.”

Local churches across Asia — home to six out of every 10 people on the planet — have quickly mobilized to “seize the moment” and extend help to their poorest neighbors, said Yohannan.

“Our fervent prayer and hope is that people across Asia will see and experience the love of God in action during this pandemic,” he said.

Chapel of the Holy Cross