Top Posts
Colorado football coach Sanders’ unabashed faith
There’s A Light That Enters Houses With No...
Knowing the One Who Always Keeps His Word
Pregnancy Resource Centers Fight For Life Amidst Opposition
This World is Not Our Home
Lessons Learned From a Gingerbread House
Let There Be Peace on Earth
‘I Wanna Dance’ movie: Whitney Houston’s success and...
Fact Finding, Sight Seeing, and Prayer Walking
Kidney donation led to 8 life-saving surgeries
Home ANS Feature Homeless children transformed by Ukrainian Family 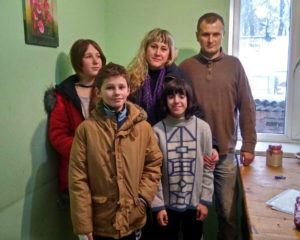 Ten years ago Ruslan and Maryna Gumenyuk felt a calling to bring God’s love to some of the most vulnerable homeless children in Ternopil in Western Ukraine.

Maryna’s journey up until that point hadn’t been easy herself. About 12 years ago Maryna’s first husband died. Left behind with her two-year-old daughter Nastya, and no job. She learned a lot about pain and fear. She became a “live-in” nanny at a Christian boarding school for orphans that provided a small bedroom. Maryna knew hardship first hand, but what she didn’t know, however, was what God had planned for her.

Two years later, Maryna married Ruslan whom she had met at a church bible study.

Now 10 years later Ruslan shares the story. “We started praying together about how to help orphans and homeless people. Every week we went to the railway station and fed homeless kids. We did this for four years and got to know the teenage orphans living there pretty well. They had nowhere else to go. Most of them were addicted to alcohol and drugs and many girls were prostitutes. It was very painful to see these children without parents. And it was not their fault. Their situation was desperate. We just felt that God told us to help them.”

Ruslan continues, “We were doing good things feeding the homeless kids, but it just wasn’t enough. It was obvious what these kids needed….it was a family. And that is why we moved to this village and bought an old, small, broken down farm. We started breeding goats and suddenly we had a goat farm. The kids love the goats.”

Maryna smiled and put her arms around their foster son Volodya. She shared, “Volodya came to us five years ago when he was eight years old. He was physically healthy and mentally delayed. He has changed a lot and has become much more confident. His dream is to become a famous cook, (like on TV) and he wants to be married and take children from an orphanage to his own family.

“People from church warned us about taking Marisa because of her many problems. But 18 months after getting Volodya, we got our little Marisa as well. We’ve never regretted that decision.

She was born with a genetic disorder and has many learning difficulties. At nine years she weighed only 44 pounds. She would hide food in her bed and in the closet. But today our 13-year-old Marisa weighs 77 pounds! She is making slow progress, we taught her to read and write, and she can even understand some of the text. Her eyesight is improving and she can now do many things like washing, combing her hair, doing the dishes and feeding the animals.”

“God has put this on our hearts,” Maryna shared. “We found one of the boys on a website for orphans who need a family. 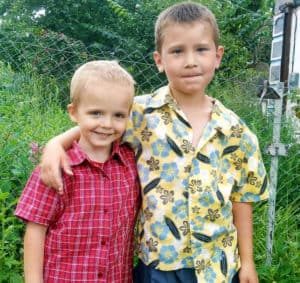 Then we learned he had a brother. The younger one, Andriy, has HIV. It didn’t matter to us. We knew we had to take them. If you have place for one, there is always place for another one.”

“You know these two boys have been rejected before. New parents took them and then later brought them back. They don’t trust adults very easily. When we visited them at the orphanage, Sasha and Andriy were very active. Sasha was more open, but Andriy was suspicious. Then after dinner they started telling their friends at the orphanage, ‘our mom and dad are here.’ We understood then that we were accepted.”

Ruslan concluded: “There is a place in the scriptures, where God says:”…and make the desolate cities to be inhabited”.. When God talks to your heart and things happen you understand, that it is His Hand. He puts something on your heart and then He does it. So, I want to say: just do what you have on your heart and sooner or later it will become real.”

Mercy Projects Founder and CEO Jeff Thompson said: “I personally know this family and have seen that they are loving, very serious, and very determined. I love that we can help Christian families like this take orphans into their home and raise them in their family. I really believe we must support the Gumenyuks, and others like them, with these practical projects. I hope you will agree.”

To find out more about how to support the Gumenyuk family go to: www.mercyprojects.org