Wills Point, TX, USA (ANS) – Dacia was known to be an obedient and joyful daughter, but now she had once again defied her parents’ explicit demands. Angered at their daughter’s out-of-the-ordinary actions, Dacia’s parents laid out harsh punishment for the 12-year-old.  She was not to attend the meetings, not to mingle with her friends and she was certainly not to read the Book. But all Dacia wanted was to learn more about Jesus. 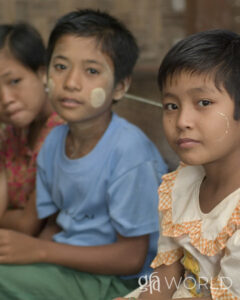 Children all around the world attend Sunday school just like Dacia (not pictured) was able to do thanks to GFA workers and others serving in this way.

An Empty Feeling Within

Dacia grew up in a household that revolved around tradition. She and her three siblings learned to follow in their parents’ and grandparents’ footsteps, holding to the rituals passed down from generation to generation. Life for the family was good. Thanks to her hardworking father, Dacia was able to attend school, where she excelled in all her subjects. Respectful and obedient to her parents, she heeded all their teachings. But Dacia still felt as though she was missing something; an empty feeling in her spirit grew and grew.

Dacia often listened to her friends talk about songs, dances and stories that were unfamiliar to her. Curious, the young girl would ask her classmates where they had learned these things.

At the Sunday school, they replied. Her schoolmates explained that every Sunday, children met at the local church led by GFA pastor Marek. There, they were taught songs and stories related to events in God’s word.

Hearing her friends’ constant enthusiasm, Dacia wanted to attend and, the stories and songs stirred a desire to know more. Some days passed, and still, Dacia thought about Sunday school. Then one of her classmates said something about a week-long event filled with games, stories, songs and other activities open to all children. Dacia asked her classmates if she could also go to this event. They happily invited her, but there was a problem: Dacia needed her parents’ permission to attend.

Finding Love and Joy Through Gospel for Asia Sunday School

The week-long church event was full of excitement for Dacia. The days sped by, each one full of fun games, songs and dances that taught children about Jesus. Here, Dacia finally found what she had been missing: the loving arms of God.

After the event, Dacia’s heart burned to know more. She began attending the Sunday school and eventually bought her own copy of God’s Word so she could read and meditate on it every day. Months passed, and Dacia continued to grow in her love of Jesus, but when the young girl shared her newfound faith with her parents, they responded in anger. They did not think her trips to the church or her time spent in God’s Word would leave a permanent mark on their child, yet they had. And now Dacia’s mom and dad needed to put an end to it. They forbade Dacia to attend church or read the Holy Scriptures.

Faith in the Midst of Fire

Dacia could not get rid of her cherished copy of God’s Word, so she hid it at a friend’s house, where she could still go and read it. She also found a way to secretly attend church services whenever she could, but it didn’t stay a secret for long. When her parents found out Dacia had ignored their demands, they were furious and punished her severely. The emotional and physical pain Dacia endured because of her faith drove her to tears on multiple occasions.

Despite the ire and disapproval of her parents, Dacia could not separate her heart from Jesus. She found strength in reading the Scriptures, the Holy Spirit inspiring and molding the young girl’s faith. Dacia had come to truly understand just how much Jesus loves her.

Pastor Marek and her friends also encouraged her and stood with her in prayer. In the midst of strong opposition and discouragement, Dacia was able to keep her eyes fixed on Jesus. Today, she prays for her family hoping they, too, will one day find what she did: God’s unfailing love.