Top Posts
‘Nothing is Impossible’ movie: Hoops, romance, second chances
‘God’s Smuggler’ Brother Andrew passes to his reward
Cultivating a Prayer, Care, Share Lifestyle
God Has Plans for Your Life
Worth and Value in the Kingdom of God
Grandchildren Bring Joy and Opportunities to Our Lives
Embracing Change and Changing Lives
Dark Academia and Dead Monks
She ‘intensely related’ to Mary Magdalene character on...
The Most Powerful Thing in the World
Home ANS Reports Millions at Risk In India of ‘Sickening Agony or Death’

Millions at Risk In India of ‘Sickening Agony or Death’ 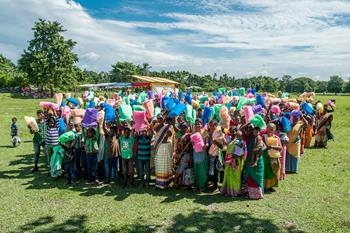 A Gospel for Asia (www.gfa.org) News Release — For Immediate Release

WILLS POINT, TEXAS (ANS – April 21, 2018) — Malaria may be a thing of the past in many places, but it remains a major public health threat in large parts of the world, prompting GFA (Gospel for Asia, www.gfa.org ) to sound the alarm on behalf of those still at risk. 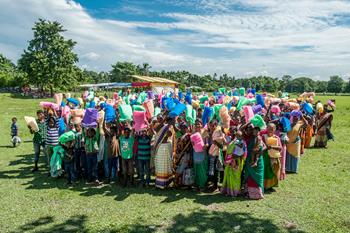 Having helped guard hundreds of thousands from the disease in the past few years by distributing protective mosquito nets, the organization is now raising awareness of the need for more prevention and treatment efforts, as scientists continue to try to develop a vaccine.

The disease, which sees more than 200 million cases and around 400,000 deaths annually, is the subject of a major new report just published by GFA. “Fighting Malaria – A Chilling Disease” — the headline a reference to the violent shivers malaria can cause — notes that following years of significant progress, the fight against malaria has “stalled” in more recent times.

Released to coincide with World Malaria Day (April 25), the in-depth GFA article is the latest in a series of special reports addressing key global issues, intending to raise awareness and encourage action. And it is one that the Wills Point, Texas-based organization has been deeply involved with.

For a suggested donation of just $10, GFA helps provide a mosquito net that can save recipients “from sickening agony or death,” the organization says. “These nets offer protection from the sting of an infected mosquito and help to give their owner a restful night’s sleep.”

As part of relief and health programs offering a practical demonstration of God’s love, GFA-supported workers in Asia have given out more than one million nets in the last two years alone. These help protect low-income families from the disease, which causes sickness that can keep those infected from going to work or school, helping perpetuate a cycle of poverty.

In addition, GFA-supported workers teach people about keeping their surrounding areas clean and free of stagnant water, to help stop the spread of mosquitoes.

“In many cases, simple changes can create a profound difference in everyday health,” said Dr. K.P. Yohannan, GFA founder. “Christ calls upon us to care for the poor, which is why we are there to offer tools like mosquito nets that can literally make the difference between life and death.”

In his report, writer Ken Walker explains that although Africa is home to the majority of malaria cases, the problem exists “across the globe, as evidenced by its presence in 91 countries.” The disease “is prevalent across South Asia,” he says, including Laos, Bangladesh, Cambodia, and large parts of India and Pakistan.

The disease has come under the microscope literally and figuratively for years, with governments, charities and other groups pouring millions of dollars into research and treatment, the GFA report details, and with the World Health Organization field-testing a vaccine this year.

Yet despite all the attention, which has seen five Nobel Prizes for work associated with malaria, the disease remains a major health concern. One researcher has grudgingly called the malaria parasite “a genius” for its ability to adapt and survive.

Walker writes of how the medical challenges are heightened by social and environmental factors.  Problems such as social unrest, conflict and humanitarian disasters, are major obstacles to progress, while climate change has also had an impact.

Inviting people to support GFA’s anti-malaria efforts, Yohannan notes in a blog post about the report that “you don’t have to be a research scientist or an infectious disease specialist in order to make a difference… You don’t have to have a massive amount of resources to help an individual or family protect themselves.”

To schedule an interview with a GFA representative, please contact Palmer Holt @ (704) 662-2569 or pholt@inchristcommunications.com .

GFA (Gospel for Asia, www.gfa.org) and its worldwide affiliates have—for more than 30 years—provided humanitarian assistance and spiritual hope to millions across Asia, especially among those who have yet to hear the Good News. In 2016, this included more than 75,000 children, free medical services for more than 180,000 people, 6,000 wells drilled, 11,000 water filters installed, Christmas gifts for more than 400,000 needy families, and spiritual teaching available in 110 languages in 14 nations through radio ministry.

Photo captions: 1) Members of GFA-supported field partner Believers Eastern Church handed out more than 2,000 mosquito nets to impoverished families and individuals in this South Asia village, protecting them from insect bites that can carry deadly diseases like malaria.  2) GFA Logo.

Uptick in Cyber Attacks since Military Strike against Syria

Drugs, Cancer Took His Parents – but Not...