Wills Point, USA (ANS) – One of Asia’s largest humanitarian agencies is calling on Christians to pray for Myanmar’s suffering people in the throes of the nation’s bloody military coup. 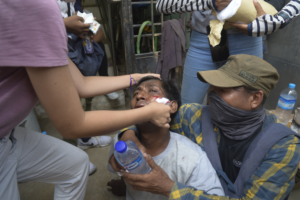 GFA World is calling on Christians to pray for Myanmar.

In the past few days, at least 114 people — including children — were killed across the country as protests continue against the military takeover, according to CNN. It brings the death toll so far to more than 400 since the coup began and the military seized control Feb. 1.

“As with any crisis, it’s the innocent that suffer the most,” said K.P. Yohannan, founder of GFA World. “At GFA World, we’re asking people everywhere to join us in praying for peace, justice and God’s protection over the people of Myanmar during the current turmoil.”

Yohannan also urged people to pray for the release of the leaders and protesters who’ve been detained by the military.

“Nowhere in Myanmar is safe right now,” he said. “Every single night is spent with fear, and dawn seems so hard to reach. The people are restless and they’re exhausted physically and mentally. Many businesses have been burned down.”

World leaders have condemned the coup and the military’s violence against the protesters, GFA noted. Hundreds have been arrested and detained, including members of parliament, doctors, and government officials.

“Myanmar’s people need our prayers and support more now than ever,” said Yohannan, whose Texas-based organization helps millions of children and families across Asia through its child-sponsorship program and clean water “Jesus Wells.”

Jesus Can Make All Things New

Biblical Truth at the forefront of UK’s National...