Top Posts
Colorado football coach Sanders’ unabashed faith
There’s A Light That Enters Houses With No...
Knowing the One Who Always Keeps His Word
Pregnancy Resource Centers Fight For Life Amidst Opposition
This World is Not Our Home
Lessons Learned From a Gingerbread House
Let There Be Peace on Earth
‘I Wanna Dance’ movie: Whitney Houston’s success and...
Fact Finding, Sight Seeing, and Prayer Walking
Kidney donation led to 8 life-saving surgeries
Home ANS Reports ‘Noah’ in Movie Theaters for Three Days Only

LANCASTER, PA (ANS) – With a catastrophic storm on its way, Noah is given a monumental task: build a boat big enough to save mankind from a flood that will cover the entire earth.

NOAH takes you on history’s best-known voyage as you board the enormous ark—along with two of every kind of animal! 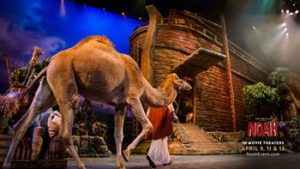 Filmed before a live audience, NOAH captures the panoramic scope, spectacle and grand scale that are signatures of a Sight & Sound musical production.

“We are excited to continue our partnership with Sight & Sound Theatres and to bring another one of their thrilling stage productions to the big screen,” said Fathom Events CEO Ray Nutt. “This theatrical presentation gives moviegoers of all ages a front-row seat to the awe-inspiring spectacle that is NOAH.”

One of the Bible’s best-known stories comes to life on movie screens for a special nationwide event April 9, 11 and 13. Filmed in front of a live audience, Sight & Sound’s NOAH is the dramatic, musical version of the man who trusted God in the toughest circumstances. More than 5 million people have experienced the live performance of NOAH at Sight & Sound’s theaters in Lancaster, PA, and Branson, MO, – making it Sight & Sound’s most-attended show in their 42-year history.

“NOAH offers a truly spectacular entertainment experience that audiences have cherished for years,” said Sight & Sound Chief Creative Officer Josh Enck. “More than the story of an ark filled with animals, this is the epic tale of how one man faced a monumental decision that led to an enormous task and a world changed forever.”

Audiences at the nationwide Fathom Events screening will also get a behind-the-scenes look at Sight & Sound Theatres’ four decades of live stage shows that have been seen by more than 23 million visitors worldwide.

Sight & Sound Theatres began more than 40 years ago in rural Pennsylvania, where a dairy farmer went from producing milk to producing live entertainment with a purpose.

Today that vision has expanded to two state-of-the art theaters in Lancaster, PA, and Branson, MO, where stories from the Bible come to life on stage. Each production features Sight & Sound’s signature massive sets, special effects and live animals.

Sight & Sound’s landmark stage production of NOAH has been captured for movie screens and presents a favorite Old Ttestament story in a creative, captivating fashion. It includes everything that’s mesmerizing about Sight & Sound — like an epic ark and, of course, a herd of animals marching two by two. Fun fact: there are over 100 live, animatronic and puppeted animals in the show.