Top Posts
Knowing the One Who Always Keeps His Word
Pregnancy Resource Centers Fight For Life Amidst Opposition
This World is Not Our Home
Lessons Learned From a Gingerbread House
Let There Be Peace on Earth
‘I Wanna Dance’ movie: Whitney Houston’s success and...
Fact Finding, Sight Seeing, and Prayer Walking
Kidney donation led to 8 life-saving surgeries
The Power of Curiosity
When Love Came Down at Christmas
Home World MissionsPersecution Pastor Brunson Released in Turkey

Brunson, who has been in Turkish custody since October 2016, will now be able to leave his home—where he’s been under house arrest for several months—and return to the United States. The ruling technically sentenced Brunson to three years in prison, but the lifting of the ban on his travel effectively means he has been freed.

Open Doors USA said the ordeal for Brunson has been long and difficult. He was accused of aiding in a failed coup attempt against Turkish leader Recep Tayyip Erdoğan, charges he has steadily denied. Reports from earlier this year suggested his health had deteriorated after he spent time in a “nightmare prison” within Turkey. 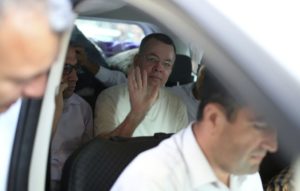 Pastor Brunson seen here being driven to his freedom

Yesterday, NBC News reported there was a secret deal to grant the release of Brunson. The details of that deal remain unclear, but some observers assume Brunson’s release will come with an easing of economic sanctions on Turkey, which has been in the midst of an economic crisis.

In a statement, Open Doors USA CEO David Curry said: “Open Doors USA is relieved to hear of Pastor Andrew Brunson’s release from house arrest to freedom. Turkey has done the right thing in allowing him to return to his home country. I applaud President Trump for the unrelenting pressure his administration applied to Turkey on this matter, in part through tariffs and sanctions. The president has rightly recognized that economic leverage can help bring positive change for human rights and can convey a powerful message of solidarity with oppressed religious minorities, especially persecuted Christians. In this case, it worked and was helpful in the release of an American Christian.

“Pastor Brunson was wrongly imprisoned for his faith and work as a Christian pastor. Turkey’s latest attack on faith, which underscores why the Open Doors World Watch List ranks it as the 31st most dangerous place to be Christian, is a clear message that religious minorities are increasingly imperiled in Turkey.”

International Christian Concern (ICC) also stated Turkish courts released American pastor Andrew Brunson from house arrest and that he is due to fly home this weekend. 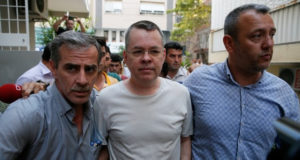 Pastor Brunson seen here in this earlier photo before a court hearing.

In court on Friday, Brunson was convicted of a “terror” charge, but as a result of the time previously served and good behavior, has been released from house arrest and his travel ban has been lifted. This will allow him to return to the United States.

After the hearing, Brunson left the courthouse and US officials said that he will be returning to his home in Izmir, Turkey before departing for the United States on Saturday morning. US President Donald Trump tweeted, “PASTOR BRUNSON JUST RELEASED. WILL BE HOME SOON!”

ICC reported Pastor Brunson has ministered in Turkey since 1993 and was originally detained with his wife Norine in October 2016. While his wife was released shortly thereafter, Pastor Brunson remained imprisoned despite a lack of formal charges. The first series of charges was brought 63 days into his imprisonment, and other charges continued to be added as time progressed.

Pastor Brunson faced charges of having links to terrorist organizations, an increasingly common accusation in Turkey against any individual or group that the government is looking to target. If Pastor Brunson had not been released today, he could have faced up to 35 years in a Turkish prison.

The United States government has been fighting for the past 24 months for his release. Last week, Secretary of State Mike Pompeo stated, “President Trump has had a focus on it [and] the administration’s had a focus on it. We’re very hopeful that we’ll see a good outcome before too long.”

Religious freedom in Turkey has significantly deteriorated since the 2016 military coup. Turkey is currently listed as a Tier 2 Country on the United States Commission on International Religious Freedom’s (USCIRF) annual report.

Claire Evans, ICC’s Regional Manager, said, “Turkey’s release of Pastor Andrew Brunson is most welcome news. For two years, he has been held as a political hostage by Erdogan and has been imprisoned in challenging circumstances. While we are pleased with his release, it is disappointing that Turkey has still convicted him of a terrorism charge. This is a stark warning to the local Church that Turkey remains a serious violator of religious freedom.”

CBNNews.com reports that the court upheld its bogus terrorism conviction of the Christian pastor but is still allowing him to leave Turkey anyway. Brunson maintained his innocence, telling the court, “I love Jesus. I love Turkey.”

“We are grateful for the President’s commitment and efforts in securing my release,” said Pastor Brunson, as he prepares to leave Turkey en route to the US. “My entire family thanks the President, the administration, and Congress for their unwavering support. This is the day our family has been praying for – I am delighted to be on my way home to the United States.”

“I thank God for Pastor Brunson’s release and look forward to his return to the United States,” said Dr. Jerry A. Johnson, president & CEO of the National Religious Broadcasters. “I am also grateful that President Trump, Vice President Pence, Secretary Pompeo, Ambassador Brownback, Senator Tillis, and other US officials refused to take ‘no’ for an answer for this man’s release. This administration stayed true to its citizen.”

Rep. Chris Smith (R-NJ) said, “I am overjoyed that Pastor Andrew Brunson is finally free from his cruel and unjust imprisonment and house arrest, and is coming home safely to the US.  For almost two years he was the victim of efforts by President Erdogan and the Turkish state to crack down on religious freedom as he languished in prison—and was then transferred to house arrest in July—on absurd charges of espionage and supporting a terrorist group, while his family suffered enormously.

The American pastor’s arrest brought two NATO allies face to face in a major geopolitical confrontation over the fate and future of this evangelical minister.

“It’s been an extremely difficult time for our family and we want to express our appreciation to the millions of people around the world who have faithfully prayed for this day,” Brunson said. “I am thankful for the representation of the American Center for Law & Justice – especially ACLJ Chief Counsel Jay Sekulow and ACLJ Senior Counsel CeCe Heil – as well as the many others who worked so hard to obtain my freedom. I look forward to returning home and being reunited with my family.”

“Hundreds of thousands of people have been praying for Pastor Brunson, not just in the United States but around the world,” said evangelical Pastor William Devlin from New York City.

Before the court hearing, US Vice President Mike Pence said the release of Pastor Brunson has been a priority for the Trump administration.

“Our administration has made very clear that we will continue to stand strong until Pastor Andrew Brunson is free and back home in the United States with his family and with his church,” Pence said.

Middle East analyst Mike Kerem said “This is historic in that how many times they have brought this up in high-level communications with the Turkish administration.”

Turkey accused Brunson of participating in a 2016 coup to overthrow the government of Turkish President Recep Tayyip Erdogan. Pastor Brunson was facing up to 35 years in prison if convicted if convicted of espionage, but those charges were dropped Friday.

Kerem said Pastor Brunson stood for more than his own freedom.

“I believe this is really a call to prayer, not only for Andrew, but for the Turkish and Kurdish and Arab and Syrian and Iraqi and Iranian people all living very close because it’s clear that Andrew Brunson is in prison or under arrest for one reason and that’s his hope and faith in Jesus Christ as the Messiah, not only of the West, but of the entire world,” he said right before Brunson’s release.

Brunson Released! Tells Judge “I Love Jesus. I Am Innocent”