Top Posts
Colorado football coach Sanders’ unabashed faith
There’s A Light That Enters Houses With No...
Knowing the One Who Always Keeps His Word
Pregnancy Resource Centers Fight For Life Amidst Opposition
This World is Not Our Home
Lessons Learned From a Gingerbread House
Let There Be Peace on Earth
‘I Wanna Dance’ movie: Whitney Houston’s success and...
Fact Finding, Sight Seeing, and Prayer Walking
Kidney donation led to 8 life-saving surgeries
Home Tags Posts tagged with "Belarus"

LOVES PARK, IL (ANS) —  When  Sergei K  of the Slavic Gospel Association-supported Orphans Reborn Ministry in Belarus visits an orphanage, he usually brings along his camera and smartphone.

“I’m usually always ready to take pictures with the kids. This was not the case on my last visit. I was putting things together in a hurry on my way to the orphanage and believed that my smartphone was in my bag, and took my camera just in case. I loaded my car with fruit and candy, and left for the orphanage,” he wrote in a ministry update. 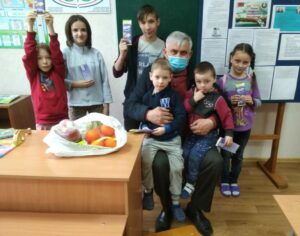 Sergei with Polina and other children in her orphanage.

“We had a wonderful time of ministry with the children reading the Bible, and they told me stories of their lives. We laughed together as they told of funny situations and prayed for their parents.

“In the end, I passed out the treats and set the camera to take pictures. The camera took three automatic snapshots and it seemed everything was fine. I was so disappointed later when I checked and found that no photos had been taken. I had forgotten to put in the SD card—my camera did not have its own memory, so the pictures were not saved. I decided to use my smartphone instead but didn’t find that in my bag either. I asked the Lord, ‘Why? Why did this happen?’

“At that moment, I did not realize that God was working His plan in the life of a girl who was not yet at the shelter.”

Several days later, Sergei picked up his smartphone, bought things for the kids, and left again for the shelter.

“When I arrived, I noticed a girl who wasn’t at the orphanage on my previous visit. She seemed familiar. She was gloomy and tried to keep away from us. I decided to get to know her and to have a conversation,” he said.

The kids told him her name was Polina, and he asked her to join them.

“She was reluctant to come, but she did and I continued to talk about Easter with the kids. After our conversation, Polina told me, ‘I know you and I know where you live. Once I even visited you.’ It was a nice surprise for me. Then I found out that Polina had visited our Christmas celebration.”

Sergei invited Polina to go to the hall and have a talk, and she agreed.

Sergei continued: “I learned that Polina had been with her aunt’s family because her own parents had lost custody of her. Her aunt could not build a relationship with her, and Polina was very mean. She did not do things she was asked to do, she came home from school five or six hours later than she should, she did not do classes, always threw fits against her aunt, and said that she hated her.

“As we talked, I explained that Polina had so much trouble not because her aunt did not love her, but because Polina did not do the right thing. She should change her attitude toward her aunt and learn to love her,” Sergei said.

Polina agreed with him and she wept bitterly.

Sergei offered  to pray for her and he taught her to ask the Lord to grant her love to her aunt, so that they could fix their relationship. Polina agreed and they prayed together.  “We asked the Lord that the commandment of Jesus to love one another would work in Polina’s heart.”

When Sergei was leaving, Polina came to see him off and her face was shining with a smile!

Sergei concluded: “This is what the Lord is sometimes doing when he uses us. A phone I left at home and a camera unable to take pictures worked together for the glory of the Lord and the transformation of a child’s heart! Thanks to everybody who supports our ministry to orphans, and may the Lord bless you!”

The Slavic Gospel Association may be reached at: 6151 Commonwealth Drive,  Loves Park, IL 61111.