Top Posts
Colorado football coach Sanders’ unabashed faith
There’s A Light That Enters Houses With No...
Knowing the One Who Always Keeps His Word
Pregnancy Resource Centers Fight For Life Amidst Opposition
This World is Not Our Home
Lessons Learned From a Gingerbread House
Let There Be Peace on Earth
‘I Wanna Dance’ movie: Whitney Houston’s success and...
Fact Finding, Sight Seeing, and Prayer Walking
Kidney donation led to 8 life-saving surgeries
Home Tags Posts tagged with "Bicycle Campaign"

The ministry says that in August and September — a period when many Americans enjoy taking their bikes out on the trails — GFA’s goal is to supply 2,500 new bikes to national workers across Asia, propelling them miles along dusty dirt roads to demonstrate God’s love. 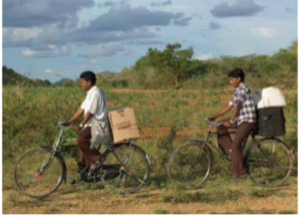 Gospel for Asia aims to aid compassion workers with bicycles

In an update for ministry supporters, GFA says that pedaling on rugged-terrain bicycles, national workers bring vital aid and spiritual hope to far-flung villages difficult to get to on foot, ministering for the first time to thousands of people who have never heard the love of Jesus Christ.

** Minister in more villages with practical and spiritual support

** Act as the local ambulance, transporting people to the doctor or hospital

A heavy-duty bicycle — costing $110 — carries compassionate workers to rural communities that rarely see outsiders. Without a bike, it can take an entire day — or longer — for a worker to walk to an isolated community, often in the searing heat.

Pastor Renjith, a GFA-supported pastor, prayed for two years for a bicycle so he could minister to a cluster of villages about nine miles from his home.

Overjoyed to receive a new bike from GFA’s field partners, Pastor Renjith now pedals everywhere and uses his bicycle to visit 10 additional villages, give elderly people rides home on the built-in backseat, and transport sick villagers to the doctor or clinic.

“The villagers thank Pastor Renjith for his kindness and consider him and his bicycle a tremendous blessing for their community,” said K.P. Yohannan, whose Texas-based mission celebrates its 40th anniversary this year.

“We thank God for the commitment of our ministry workers whose primary goal in life is to bring the joy and love of God to people everywhere, regardless of the personal effort and sacrifice.”

To join in the campaign, go to www.gfa.org/press/bicycles.