Top Posts
Pregnancy Resource Centers Fight For Life Amidst Opposition
This World is Not Our Home
Lessons Learned From a Gingerbread House
Let There Be Peace on Earth
‘I Wanna Dance’ movie: Whitney Houston’s success and...
Fact Finding, Sight Seeing, and Prayer Walking
Kidney donation led to 8 life-saving surgeries
The Power of Curiosity
When Love Came Down at Christmas
A Walk of Faith Begins with a Step...
Home Tags Posts tagged with "Claire Ollerton"

Annan, Dumfriesshire, SW Scotland (ANS) — Most people have heard of the Teddy Bear, named after famed U.S President Theodore Roosevelt.  But have you heard of a Teddy Bear called Hopsy? In Hopsy The Handybear, author Claire Ollerton continues her series on the beloved character.  With Hopsy The Handybear, Ollerton, a retired schoolteacher in England now living in Scotland, has produced nearly 100 books since she started writing for all ages in 1972. 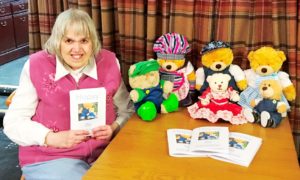 I reach out to Ms. Ollerton to learn more about Hopsy the bear.

What was your initial inspiration for the character?

“I had been donating Teddy Bears to traumatized children for a long time and I had a bad fall which caused me to be admitted as an emergency at Dumfries & Galloway Royal Infirmary where I was kept in under observation for a few days.  I had with me one of the bears that I usually donated to the hospital, as I had been enroute to fundraise for more bears via the sales of my books. Needless to say, the bear found its way to their children’s unit.  I was required to keep quiet so that I would recover. In a flash of inspiration from the LORD came the idea for the series of books on the bear. Why don’t you write a story about him, I thought? Though I only had a pen, the Lord provided a piece of paper towel and I started.

In the story the bear had a fall and ended up in hospital! I was going to call him Hospy but it wasn’t right so changing the letters around he became Hopsy. Since then he has got another name, Samuel, and a family called the McBruins.  So, he is called Hopsy Samuel McBruin. Last year, in 2019, the first book ‘Hopsy’ was written and published.” 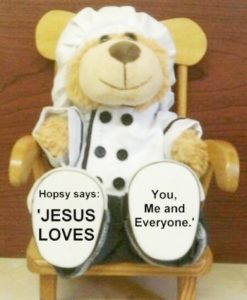 What was the idea behind providing teddy bears for children?

“Many years ago I belonged to a Teddy Bear collector’s club called ‘Good Bears of the World’ which no longer has a branch in the UK. I was doing craft work involving my first bear and writing books about him and I was able to sell them through contact with the other members and especially at two of their major craft fairs. They had a charitable arm which supplied teddies to disadvantaged children but only in a limited way.

“One day the Lord prompted me to go and buy a teddy from a local toy shop and take it to my local hospital, so I did. The Sister in charge of the ward wasn’t there when I went but a nurse took it.  I emphasized to the nurse that it was to be given to the most ill child in the ward. A few days later I received a phone call: ‘I’m Sister Snow, my husband used to teach you history. I’ve called about the Bear.’

I asked if there was anything wrong with the bear.

‘Oh no, we placed in the arms of one of our little patients who had been in a coma for more than three weeks and one of my nurses saw her arm suddenly move and she opened her eyes and said, ‘Teddy.’ A miracle had occurred.”

Did the Bear ministry begin at this time?

“Unfortunately, at the time I couldn’t give any more bears as my mother had colon cancer and I had to nurse her full time.  But when she went to be with the Lord I moved to Annan and subsequently had an appointment at the infirmary.  I went into the infirmary shop and opposite me on a shelf was a little teddy looking at me.  So, I bought him and asked the assistant to take it up to the Children’s Unit, as I had a bus to catch. I did the same on a subsequent visit, but the

assistant told me to deliver it myself. Here began the ministry.

“Later, when I was recovering in the hospital from a double glaucoma operation, a nurse came in the ward and said, ‘I know you, you’re The Bear Lady! I used to work in the Children’s Unit.’ Since then, the title has stuck. All the bears provided now are purchased from reputable sources, so they are as pristine as possible.”

Concerning the release of Hopsy The Handybear you state, “I am extremely pleased with the new book especially it was a tough process to get it completed. I am still very passionate about providing teddy bears for these children.”

What made this book a “tough process?

“It required a lot of prayer, sorting things out and getting the props especially for the ‘baking’ section as real food was used. Also, 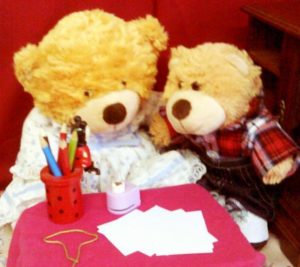 testing the game out with children to make sure it worked properly and that they enjoyed the game before putting it in the book. Furthermore, all the photography. It required a lot of time pulling it all together. Many are not aware of the amount of work that goes into a book.”

Different in style from her previous work, Hopsy The Handybear features a mixture of English and Scottish language within the book.  Also, there are a few American-English translations included in the dictionary page.

Why did you decide to include a multi-language approach?

“The older members of the McBruin family in the book are from The Scottish Highlands, so they speak differently to Hopsy. Therefore, translations had to be included of the conversations. Also, the books are sold in the USA, so interpretations were required. And some of the recipe ingredients had to be translated into American-English because they are different from British.” 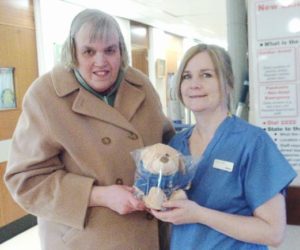 The cost of The Handybear is £6.50 or $10.00 + shipping and handling from Amazon. It can be also purchased via any bookseller using the following ISBN number: 978 1 898936 94 7. Or, I can be contacted at: info@steadfastministries.co.uk by people in the UK who would like to have a copy sent direct.