Top Posts
Colorado football coach Sanders’ unabashed faith
There’s A Light That Enters Houses With No...
Knowing the One Who Always Keeps His Word
Pregnancy Resource Centers Fight For Life Amidst Opposition
This World is Not Our Home
Lessons Learned From a Gingerbread House
Let There Be Peace on Earth
‘I Wanna Dance’ movie: Whitney Houston’s success and...
Fact Finding, Sight Seeing, and Prayer Walking
Kidney donation led to 8 life-saving surgeries
Home Tags Posts tagged with "Doug Shope" 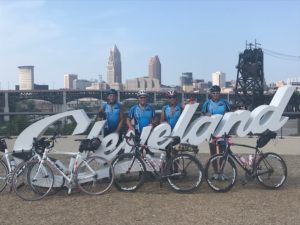 CINCINNATI, OH – A group of devoted cyclists are gearing up for Ernie’s Ride, where they will travel hundreds of miles along the Ohio To Erie Trail from Cincinnati to Cleveland, committed to a message that “every life matters.” The riders are set to take off on Friday morning.

Doug Shope, Lebanon resident, cyclist and Ernie’s Ride founder said he started the ride in 2014 in honor of his Uncle Ernie Nicholson, who was born with Down Syndrome.

“I thought about my Uncle Ernie and how much he was a blessing to me. You can read Uncle Ernie’s story online at www.erniesride.com/meeternie. God used him to teach me, early in life, that all people aren’t the same as me – that God created everybody differently,” he said.

Shope said what he hopes to do is “save lives.” All of the monies raised from the event go toward helping local families.

“In early 2014, I read an article that stated that, in Iceland, there had been no babies born with Down Syndrome in the previous nine years. It isn’t that they found a cure. You see, they have mandatory prenatal screening for Down. And all of the parents whose children tested positive for it were terminated before birth. In the U.S. and other countries, when a prenatal screening shows positive for Down Syndrome, the results are often the same as Iceland. I thought about my Uncle Ernie and how much he loved and valued me. I had been planning some long rides and thought, ‘If I’m going to do this (a long ride) anyway, I ought to try to help someone by doing it.’ Helping people choose life for their baby – no matter if the challenges are physical, mental, societal, or whatever – this is the goal of Ernie’s Ride. These centers help parents choose life and help them as they raise this child they have chosen to love. Every one of these children has immense value. While they may be different, it doesn’t make them any less. They are just as valuable as someone who doesn’t have Down Syndrome. They’re just different and God uses all of us, and each of our differences to help us learn and grow as human beings,” Shope said.

The event is held the first weekend in August, near Nicholson’s birthday. He was born on August 3, 1943. Ernie’s Ride will raise awareness and funds for two area organizations, Community Pregnancy Center in Middletown and Elizabeth’s New Life Center in Lebanon. This year’s ride will be held on Friday, August 2 through Sunday, August 4. Seven riders will complete up to a 320-mile distance between the Ohio River, in Cincinnati, and Lake Erie, in Cleveland, during the three-day event.

Shope embarked on solo rides in 2014 and 2017. (There were no rides held in 2015 and 2016.) In the 2018 Ernie’s Ride, he was joined by three other riders – Brian Messer, Tim Settlage and Chad Settlage. Cyclists in the 2019 ride include Shope, Brian Messer, Dave Huff, Kent Keller II, Luke Williams, Chad Settlage and Scott Wright. In the three previous years, Ernie’s Ride has raised over $20,000, which has gone directly to the Community Pregnancy Center and Elizabeth’s New Life Center.

Riders are expected to travel about 330 miles by bicycle – about 117 miles on the first day, 105 miles on the second day and about 108 miles on the third day of the trek. The per-mile pledge serves as a motivation for riders to complete the journey. Riders will continue to pedal knowing that each mile means life to women, babies, and families in Butler and Warren Counties.

“During the ride, I enjoy the camaraderie with the other riders.  Shared experiences and shared sufferings – though minor ones – draw people together.  The sense of accomplishment and challenges met are very gratifying.  We get to experience the beauty of creation up-close and personal, and we create memories that are only possible in experiences like this,” Shope said.

Members of the community can support a designated rider by pledging a certain amount per mile (up to 320 miles that the rider completes.) Donations will be made directly to the center the supporter chooses, once the ride is complete. More than 180 people have already pledged support in 2019.

“This is a compassionate thing to do. It saves lives, and it makes us better people. People that are grateful and generous, tend to be happier,” Shope said.

For more information, or to sponsor a rider go to www.erniesride.com. For more about programs and services, visit Elizabeth’s New Life Center online at www.elizabethnewlife.org and Community Pregnancy Center at www.pregnancychoice.net.