Top Posts
There’s A Light That Enters Houses With No...
Knowing the One Who Always Keeps His Word
Pregnancy Resource Centers Fight For Life Amidst Opposition
This World is Not Our Home
Lessons Learned From a Gingerbread House
Let There Be Peace on Earth
‘I Wanna Dance’ movie: Whitney Houston’s success and...
Fact Finding, Sight Seeing, and Prayer Walking
Kidney donation led to 8 life-saving surgeries
The Power of Curiosity
Home Tags Posts tagged with "Health Problems"

While many have received help, thousands more are still in need of medical care and support. 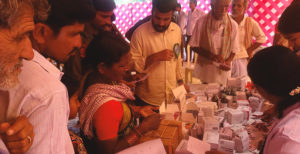 Patients were able to get the medication they needed right there at the medical camp .

GFA’s medical ministry is trying to do something about this. GFA-supported workers organize free medical camps throughout Asia. These medical camps bring skilled doctors, medical staff, medicine and health education to places where people rarely have the opportunity to visit a doctor.

In October, behind-the-scenes missionary Tony had the opportunity to visit one of these medical camps. Tony shares firsthand what he experienced.

“It was a warm Wednesday morning, and we were on our way to visit a free medical camp organized by a GFA-supported worker. I have never been to a free medical camp before and didn’t give it too much thought, other than I was looking forward to the experience. But I was in for a surprise.

“After an hour drive, we arrived in a very remote area. Everything for the clinic was set up right next to the local church building. Right away, I noticed there were more than 200 people lined up waiting for the clinic to start, and everyone from infants to the elderly waited patiently. As the word about this medical camp spread, more people gathered. I was surprised that people were waiting and still coming before it even started.

“Many of the villagers did not have the resources to see a doctor. Even if they did, the nearest medical center was more than 60 miles away, and they would have had to travel by foot to get there. This makes it very difficult for parents who want to help their children or for aging parents to get treatment when they get sick.

Everyone from infants to the elderly gathered for the medical camp.

“Before the camp started, the team thanked everyone for coming and opened the day with prayer. Four doctors had graciously volunteered their time.

“Several lines were formed—each person would see the doctor and then go to another line to get a prescription, if needed. Rather than sending these patients to a pharmacy, the camp had organized the ability to give them the prescribed medicines they needed, and this helped patients to avoid additional travel.

“Several hours later, as we were wrapping up our time at the camp, there were still many people to be seen, and the doctors continued their work. My gratitude for this area of ministry grew—I knew it was very important for the villagers because it was the first medical camp ever done in their village.

Patients were able to get the medication they needed right there at the medical camp.

“I learned that simple medicines and treatment I can easily obtain are not the same for everyone in the world. It is true that showing kindness in this way is a practical way to show God’s love. Having this free medical camp was such a blessing to everyone who was able to be a part of it.”