Top Posts
Knowing the One Who Always Keeps His Word
Pregnancy Resource Centers Fight For Life Amidst Opposition
This World is Not Our Home
Lessons Learned From a Gingerbread House
Let There Be Peace on Earth
‘I Wanna Dance’ movie: Whitney Houston’s success and...
Fact Finding, Sight Seeing, and Prayer Walking
Kidney donation led to 8 life-saving surgeries
The Power of Curiosity
When Love Came Down at Christmas
Home Tags Posts tagged with "Irish Journalist"

LONDONDERRY, NORTHERN IRELAND (ANS) — Tributes have been paid and vigils held for 29-year-old journalist Lyra McKee from leading figures in the worlds of journalism, politics and the Church. Many have signed books of condolence.

Politicians on both sides of the Northern Ireland Border have condemned the killing of McKee, who died after being shot during riots in Londonderry on Thursday night, according to The Irish Times and the BBC. 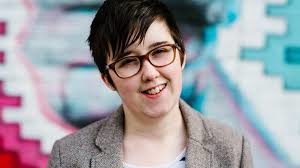 McKee, an author and journalist from Belfast, died in Altnagelvin hospital after being taken from the scene of the disturbances in the Creggan area by police. McKee had tweeted a picture of the scene shortly before she was killed, with the caption: “Derry tonight. Absolute madness.”

Former president Mary McAleese has said McKee came to her attention for eloquent advocacy on behalf of equality and rights for the LGBTI community.

The Irish Times reported McAleese said the slain journalist’s attempts to educate the churches about the damage their teachings on homosexuality did to individuals, including Lyra herself, were commendable. Moreover, her beautifully communicated sadness at the suicides provoked by homophobia and the Troubles continues to resonate.

According to The Irish Times, McAleese said it is vital that McKee’s voice is not silenced by her murder and that politicians and churchmen who have condemned the perpetrators need to do what it takes to make Northern Ireland a place of safety for Catholics and Protestants, gay and straight.

“That is how we can truly and truthfully honour her legacy and keep her voice alive,” she said.

British Prime Minister Theresa May said the killing was “shocking and truly senseless.” Mrs May added McKee was a journalist who “died doing her job with great courage.”

Former US president Bill Clinton tweeted that he was “heartbroken by the murder of Lyra McKee and the violence in Derry.”  Clinton said the challenges in Northern Ireland today “are real – but we cannot let go of the last 21 years of hard-won peace and progress. This tragedy is a reminder of how much everyone has to lose if we do.”

The National Union of Journalists (NUJ) condemned the “indiscriminate” killing. Assistant general secretary Séamus Dooley said McKee was a “journalist of courage, style and integrity. She was a woman of great commitment and passion.”

The NUJ described McKee as “one of the most promising journalists” in Northern Ireland.

Meanwhile, the BBC said the Catholic bishop of Derry commented the community in the nationalist area where Lyra McKee was shot dead needs to be “liberated” from dissident republicans.

Bishop Donal McKeown said the “small” group of dissident republicans in Derry is a “danger to all of us.” He told the BBC’s Sunday Sequence that people in the Creggan estate were “disgusted at what happened.”

“We don’t want to be laboured with a reputation that comes from a small group that represents a small number of people but is actually a danger to all of us.”

The BBC reported Police have blamed dissident republicans for the murder, which happened after violence broke out as officers were carrying out searches for weapons and ammunition.

McKee was standing near a police 4×4 vehicle when she was shot after a masked gunman fired towards police and onlookers.

According to the BBC, the 1998 peace deal marked the end in the region of decades of violent conflict — known as the Troubles — involving republicans and loyalists during which about 3,600 people are estimated to have died.

The Good Friday Agreement was the result of intense negotiations involving the UK and Irish governments and Northern Ireland’s political parties.

The BBC reported McKee’s partner, Sara Canning, speaking at a vigil in Londonderry, said the journalist’s dreams had been “snuffed out by a single barbaric act.” Canning said she had been “left without the love of my life.”

The BBC report said mobile phone footage taken by a bystander during the rioting appears to show a masked gunman crouching down on the street and opening fire with a handgun.

McKee, who was standing near a police 4×4 vehicle, was wounded.

“She was taken away from the scene in a police Land Rover to Altnagelvin Hospital but unfortunately she has died,” said Assistant Chief Constable Mark Hamilton of Police Service Northern Ireland (PSNI).

The BBC went on to say the leaders of Northern Ireland’s six biggest political parties stated they were “united in rejecting those responsible for this heinous crime.”

In a joint statement, they said: “Lyra’s murder was also an attack on all the people of this community, an attack on the peace and democratic processes. It was a pointless and futile act to destroy the progress made over the last 20 years, which has the overwhelming support of people everywhere.”

“This was an attack not just on one citizen – it was an attack on all of us, our nation and our freedoms,” said one Irish leader.

“I have no doubt that it was that commitment which led to her presence on the streets of the Creggan last night, observing a riot situation in the city,” he added.

Then BBC stated filmmaker Alison Millar, who was due to have dinner with Ms McKee on Friday night, said her friend had been “stolen from us.”

“Lyra was the most beautiful human being,” she said, adding: “She was compassionate, she was honest, she was funny… she had so many friends and was loved by so many people.”

The BBC report cited one reporter, Leona O’Neill. who was at the scene and said a gunman “came round the corner and fired shots indiscriminately towards police vehicles. There were a number of houses with families — they had all spilled out on the street to see what was happening.”

Archbishop Eamon Martin, the head of the Catholic Church in Ireland, tweeted to ask people to pray for McKee’s family, the BBC said.

Pastor Jack McKee (no relation) of New Life City Church in Belfast told ASSIST News, “I did not know Lyra McKee personally, but was aware of who she was. Like everyone else in Northern Ireland I was totally shocked and saddened to hear of her death and the manner in which it happened.

“Police Officers were the target for these terrorists, but Lyra was an innocent bystander hit by a stray bullet. Those who killed her are members of an organisation that calls itself the New IRA. They have little community support, but enough to enable them to exist and to possibly grow in numbers and in strength.”

Pastor McKee went on to say: “There is sadness and there is anger right across the religious and political spectrum of Northern Ireland, but an anger that is added to by the fact that those who represent this terrorist organisation were permitted to walk in full paramilitary uniform through the streets of Dublin within hours of her murder.

“Added to the sadness is the likelihood that those responsible for Lyra’s murder are younger than her, showing that the sectarian hatred in Northern Ireland, while rejected by many, is still as real today as it was in 1969 when the modern day Troubles of Northern Ireland began. Unless this ends, there will be more innocent victims like Lyra McKee.”