Top Posts
Knowing the One Who Always Keeps His Word
Pregnancy Resource Centers Fight For Life Amidst Opposition
This World is Not Our Home
Lessons Learned From a Gingerbread House
Let There Be Peace on Earth
‘I Wanna Dance’ movie: Whitney Houston’s success and...
Fact Finding, Sight Seeing, and Prayer Walking
Kidney donation led to 8 life-saving surgeries
The Power of Curiosity
When Love Came Down at Christmas
Home Tags Posts tagged with "James Mead"

In Support of Ukraine

I sit down with James Mead, guitarist of the rock band Kutless, whose new song—the first in several years—is released this month.  We order New Mexican food at Church Street Café, a building constructed around 1709.  Interestingly, it was during this time in world history that Ukraine began to develop as a distinct country and nationality, independent of its Polish and Russian neighbors.  What makes this point in history relevant to this article is that Mead and I meet to discuss Ukraine and his work with the Ukrainian people. 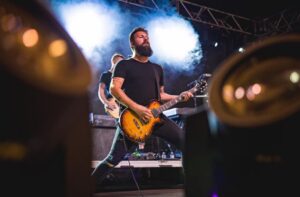 After ordering, I ask Mead to give me a summary of his work with Ukraine.  “I’m involved with Eastern European Mission (EEM) providing Bibles in over 30 countries and over 20 languages, nearly 2 million Bibles provided for free to all who ask. And we’re also doing humanitarian work with the Ukrainian people, providing them with essential needs, food, water, and literature. At EEM, our goal is to make sure that everyone has access to God’s Word in their own language, and educate and inspire people with hope.”

How would you describe the status of the Ukrainian people during the war with Russia, I ask?  “I have not been over there since the war began, but our contacts tell us that the Ukrainian people remain resilient, hope filled. I’d encourage people to read EEM’s Ukraine Aid Newsletter. In it, Ukraine updates are regularly given.” 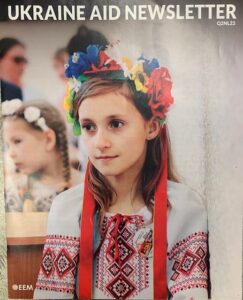 Tell me about the last time you were in Ukraine with your band Kutless?  “Our band performed in Ukraine in 2015 and 2016, and to be honest, it was the most impactful ministry experience I have ever been part of. We saw tens of thousands of lives changed; there is a hunger in the heart of the Ukrainian people —for freedom, for faith, for moving forward. We were treated like family. We have an abiding love for the Ukrainian people.  So, my heart hurts in a unique way during this Ukrainian war. It’s one of the reasons Im glad to work with EEM.”

As someone who has spent personal time with the Ukrainian people, give us a sense of who they are as people and nation.  “Like most people, Ukrainian’s want the basics of life—family, food, a safe place to live and worship.  They want to prosper and be productive citizens. As an Eastern Slavic people, they are native to the region, and have had a long history—pro and con—with its neighbors, Poland and Russia.  And generally, most of Ukrainian inhabitants are of Eastern Orthodox Christian descent.  It’s hard to articulate precisely, but the Ukrainian’s are spirited and delightful people; they have an amazing culture.”

How can people assist you in your service to Ukraine?  “To be honest, you can pray.  It’s very difficult for the Ukrainian people now.  With Putin escalating his rhetoric, many Ukrainian people live in daily fear.  Things such as education, food, and security are becoming scarce.  Second, you can give.  To partner with Easter Ukraine Mission, go to https://www.eem.org/ukraineaid/.”

After selling 3 million albums, you’d think the members of Kutless would rest on their laurels.  Thankfully, they have not, and continue to be light amid darkness.  Mead and I finish our chicken enchiladas, soaking in the ambiance of the New Mexico atmosphere, talking of life and longings and the forthcoming Kutless album. 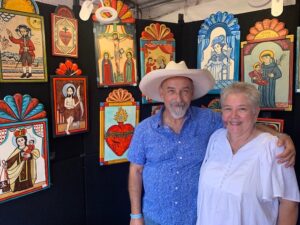 Concerning light amid darkness, after leaving Mead—I head to Globalquerque, the largest world music festival in New Mexico.  By the time I reach the event at the Hispanic Cultural Center, it is turning night.  But the bright lights of the festival, the sounds or marvelous music, and fun vibes fill the air.  To summarize the festival, Globalquerque is community of culture, letting music lead the way.  Globalquerque offers music, film, educational outreach, children’s activities, artisan booths (such as Charles and Debbie Carrillo, notable New Mexico artists) and workshops to explore world creativity. 2022 marks the 18th anniversary of the festival. 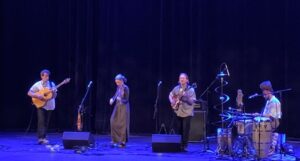 When I arrive, Wassa Ensemble, a band from Guinea, West Africa hollers “Are you ready?” followed by infectious rhythm. People dance, sway, and holler back.  Later, I follow the crowd to see the Swedish band Kolonien.  The band of four (two brothers, a cousin, and childhood neighbor) satiates the Journal Center with Swedish music, uplifting our minds and enriching our understanding of Swedish life and culture.   After the concert, I head to the Courtyard stage to see Estonian duo, Puuluup, an art-folk band.  Estonia, for me, is the music of classical composer, Arvo Pärt, but Puuluup—with their unique instrumentation and surreal sounds—provides a whole new understanding of Estonian music, particularly as it relates to the hiiu kannel instrument. But the main reason I attend Globalquerque is to see the Ukrainian band, DakhaBrakha. To do so, I return the following day, riding my bike down the Bosque trail. 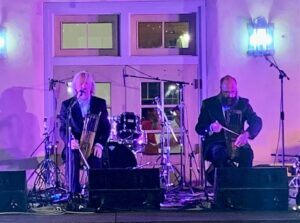 According to the Globalquerque website, DakhaBrakha’s “numerous honors include the 2009 Sergey Kuryokhin Prize, named for the late St. Petersburg-based composer and experimental artist. In 2020, they won the Shevchenko National Prize, Ukraine’s highest state award for achievements in culture and the arts.”  As the festival program (artwork by Sean Wells) states, “Our arms are not only open in welcome but in solidarity, support and love.”

But to really understand DakhaBrakha, you must see them live.  The name DakhaBrakha means “give and take.”  And this is exactly what they do with the audience, give a marvelous concert, and take in respect and love. They have a unique visual presence, all based in Ukrainian culture—fur hats, white gowns, and traditional boots.  As multi-instrumentalists, the quartet (Marco Halanevych, Iryna Kovalenko, Olena Tsibulska, and Nina Garenetska) mesmerizes the audience, taking us on a mysterious musical journey.  The band describes their music as “ethno-chaos.”  Part folk, part avant-garde, part pop, the group combines cello, accordions, keyboard, driving-percussion, and four-part harmonies in a unique and enthralling musical soundscape.  To say the least, the packed auditorium soaked in the music with such pleasure that people began cheering.  It was a musical revelation, a banquet for the ears and eyes. In an NPR interview, Anastasia Tsioulcas writes, the “ambassadors of free Ukraine” hollers “Stop Putin,” and “No war” during concerts.  Albuquerque was no different.  A palpable pro-Ukrainian feel was evident—by both the band and the audience.

Why I went to see DkhaBrakha is to remind myself that hate hurts, but hope heals, war divides, but music mends. Seeing and hearing live music is good for the soul and society.  In a way, supporting a Ukrainian band during the Ukrainian war protests Putin, yes, but also draws a line in the sand against all dictators of discord, destroyers of the human spirit.  Seeing a band during a war is a deed of defiance, but also promotes a fellowship of freedom, a means to measure the human heart. 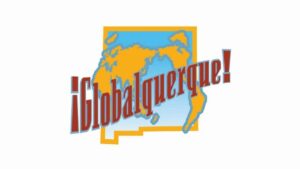 I’m thankful for people like James Mead and bands like DkhaBrakha that remind us of hope and charity, and for events like Globalquerque where one can rejuvenate, reveling and rifling to the rhythm in recognition of our human family, especially those in need.