Top Posts
Colorado football coach Sanders’ unabashed faith
There’s A Light That Enters Houses With No...
Knowing the One Who Always Keeps His Word
Pregnancy Resource Centers Fight For Life Amidst Opposition
This World is Not Our Home
Lessons Learned From a Gingerbread House
Let There Be Peace on Earth
‘I Wanna Dance’ movie: Whitney Houston’s success and...
Fact Finding, Sight Seeing, and Prayer Walking
Kidney donation led to 8 life-saving surgeries
Home Tags Posts tagged with "Jesus miracle"

In the Scripture, Jesus tells parables about finding a lost coin, lost sheep, and a lost son, revealing his heart to find 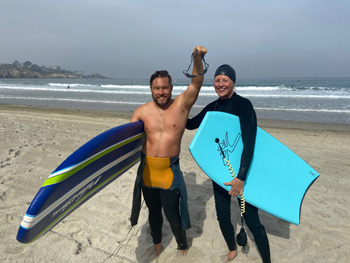 Sam holds goggles up, standing next to his mother Sally

lost souls and restore them to fellowship with God.

My wife Sally has found it helpful to pray when somewhat mundane items like car keys or phones have been misplaced, and it seems the Holy Spirit always directs her to their location.

But her faith was severely challenged recently on a family vacation in San Diego when she lost a pair of swim goggles about 25 yards off shore.

She came in and scanned the Pacific Ocean with a forlorn expression. “Why don’t you go out and look for them?” her daughter-in-law, Rebecca asked.

“No, that’s a big ocean out there. There’s no way. It’s a needle-in-a-haystack. If you lose something out there it’s gone.”

She admitted later she had no faith whatsoever to find the goggles. All she saw was a giant ocean. Even worse, the goggles were dark-colored and blended with the water.

An hour later, her son Sam was surfing in a completely different area from the one where his mother lost the goggles. He yelled at his brother, Nate: “Hey, mom lost her goggles. See if you see them.”

Sally didn’t know if the goggles could float. They could be at the bottom of the ocean, Sam thought to himself. If they do float, maybe I’ll see them, but I would have to be real close, like right on top of them.

Sam threw up a prayer to God, “Jesus, help me find them.”

Sam took his last wave of the family vacation and it was a great ride. He fell off the board and then hopped back on another wave to carry him toward shore.