Top Posts
Knowing the One Who Always Keeps His Word
Pregnancy Resource Centers Fight For Life Amidst Opposition
This World is Not Our Home
Lessons Learned From a Gingerbread House
Let There Be Peace on Earth
‘I Wanna Dance’ movie: Whitney Houston’s success and...
Fact Finding, Sight Seeing, and Prayer Walking
Kidney donation led to 8 life-saving surgeries
The Power of Curiosity
When Love Came Down at Christmas
Home Tags Posts tagged with "Muslim Fulani herdsmen"

Thirteen members of a church in the Plateau state of Nigeria were killed by armed Muslim Fulani herdsmen on Wednesday (Jan. 8), an independent news service focused on the persecution of Christians reported yesterday.

On the same day, four students were kidnapped from a Catholic seminary in Kaduna state, Morning Star News stated.

The 13 dead were all members of the Church of Christ in Nations (COCIN), as were three people wounded in the assault, residents of the Kulben village in Mangu County, told the news service. About 20 herdsmen attacked the predominantly Christian village at about 8 p.m., according to the report.

“They were shooting with guns in all directions, forcing the villagers to scamper into surrounding bushes,” Michael Mutding, 40, who lives in the area, told Morning Star News in a text message. “Corpses of those killed have been evacuated by soldiers and police to the mortuary of Mangu Cottage Hospital; and all the victims are members of COCIN.” 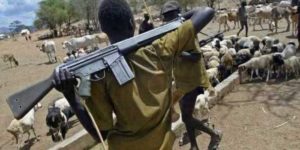 About 1,000 believers were killed by Islamic militants during 2019, according to a report from Humanitarian Aid Relief Trust (HART) about the persecution of Nigeria’s Christian community.

Nigeria is ranked No. 12 on the World Watch List released annually by Open Doors. It’s also the country with the most faith-related killings year after year.

The attacks came despite efforts by security agencies, stated Bala Fwengje, a legislator representing the area in the Plateau State House of Assembly.

“This attack on my people by these herdsmen comes as a rude shock to us, as efforts have been made by security agencies to curtail such incessant attacks on our people,” Fwengje said. “It is a sad thing that these attacks are still being carried out by the herdsmen on our people without provocation.”

Serious conflict between people in the area of Kulben and herdsmen living in the area did not previously exist, according to reports.

“Our community had lived peacefully with the herdsmen without any issues of dispute with them,” Audu Tetmut, a 60-year-old area leader of the Christian community, told Morning Star News. “So we are surprised that they attacked us.”

On the day after the attack, Plateau state Gov. Simon Bako Lalong vowed to bring the guilty to justice.

“We have toiled to ensure that peace returns to Plateau state, and we will not allow anyone to make nonsense of our efforts,” Lalong said. “We are determined to deal decisively and firmly with anybody found culpable in attacking or inciting people to carry out attacks against one another.”

Plateau State Command spokesman Terna Tyopev also confirmed the attack in a statement on Thursday, and added that a team of detectives and other officers are on the crime scene to prevent further attacks.

“Armed bandits” abducted the seminarians after the assailants shot sporadically at students, professors and staff members between 10:30 p.m. and 11 p.m., according to the Rev. Joel Usman, registrar of the institution.

The seminary, which trains students for Roman Catholic priesthood, is located in Kakau village along the Kaduna-Abuja highway.

“Kindly pray for the release of these students,” Usman said.