Top Posts
Knowing the One Who Always Keeps His Word
Pregnancy Resource Centers Fight For Life Amidst Opposition
This World is Not Our Home
Lessons Learned From a Gingerbread House
Let There Be Peace on Earth
‘I Wanna Dance’ movie: Whitney Houston’s success and...
Fact Finding, Sight Seeing, and Prayer Walking
Kidney donation led to 8 life-saving surgeries
The Power of Curiosity
When Love Came Down at Christmas
Home Tags Posts tagged with "Rt Rev Bashar Warda"

A Middle Eastern archbishop has accused Britain’s Christian leaders of  ‘political correctness’ in failing to do enough in defence of the vanishing Christian community in Iraq.

In an impassioned address in London, the Archbishop of Irbil, the capital of Iraqi Kurdistan, the Rt Rev Bashar Warda, said Iraq’s Christians now faced extinction after 1,400 years of persecution while Britain’s Christian leaders played with ‘political correctness,’ according to the BBC. 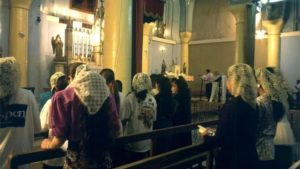 Since the US-led invasion toppled the regime of Saddam Hussein in 2003, he said, the Christian community had dwindled by 83%, from around 1.5 million to just 250,000.

The BBC said the archbishop referred to the current, pressing threat from Islamic State (IS) jihadists as a “final, existential struggle,” following the group’s initial assault in 2014 that displaced more than 125,000 Christians from their historic homelands.

“Our tormentors confiscated our present,” he said, “while seeking to wipe out our history and destroy our future. In Iraq there is no redress for those who have lost properties, homes and businesses. Tens of thousands of Christians have nothing to show for their life’s work, for generations of work, in places where their families have lived, maybe, for thousands of years.”

According to the BBC, Islamic State, known in the Arab world as Daesh, was driven from its last stronghold at Baghuz in Syria in March after a massive multinational military campaign, effectively spelling the end of its self-declared “caliphate.”

Before that, it had already been expelled from Iraq’s second city of Mosul in July 2017.

But churches, monasteries and homes belonging to Christian families have been decimated and thousands of families have not returned, the BBC reported.

TheBBC report said the archbishop this week warned of what he said were a growing number of extremist groups that asserted that the killing of Christians and Yazidis helped to spread Islam.

The archbishop went on to accuse Britain’s Christian leaders of “political correctness” over the issue — he called the failure to condemn extremism “a cancer,” saying they were not speaking out loudly enough for fear of being accused of Islamophobia.

“Will you continue to condone this never-ending, organised persecution against us?” he said. “When the next wave of violence begins to hit us, will anyone on your campuses hold demonstrations and carry signs that say ‘We are all Christians’?”

The BBC said his views on political correctness are shared in part by the Bishop of Truro, the Rt Rev Philip Mounstephen, who chairs the Independent Review into the Foreign Office’s response to the persecution of Christians worldwide.

“I think the archbishop is right that a culture of ‘political correctness’ has prevented Western voices from speaking out about the persecution of Christians,” he says. “I think though this is mainly to do with a reluctance borne of post-colonial guilt.”

Bishop Mounstephen maintains that Christian persecution needs to be viewed from a global perspective and has multiple causes.

“If we only consider it in the light of Islamic militancy,” he says, “we let a lot of other people off the hook who should otherwise be held to account.”

Taking a historical perspective, the Archbishop of Irbil lamented the fact that in centuries past there was a happy period of fruitful cooperation between Christians and Muslims in Iraq, a time that historians have referred to as the Islamic Golden Age.

“Our Christian ancestors shared with Muslim Arabs a deep tradition of thought and philosophy,” says Archbishop Warda. “They engaged with them in respectful dialogue from the 8th Century.

“A style of scholastic dialogue had developed, and which could only occur because a succession of caliphs [Islamic political and religious leaders] tolerated minorities. As toleration ended, so did the culture and wealth which flowed from it.”

The BBC said that elsewhere in the Middle East it is a mixed picture for Christians in 2019.

In Egypt, the Copts, who constitute at least 10% of the country’s 100 million-plus population, have come under sustained attack from jihadists who have bombed their churches and attempted to drive them out of northern Sinai.

In Saudi Arabia, the birthplace of Islam and a country that has enforced a narrow, austere interpretation of Islam for the last 40 years, the first Coptic Christian mass was allowed in December.

In Syria, the Christian minority felt deeply threatened by the largely Islamist element amongst the rebel groups. With President Assad’s forces now in the ascendant, as a result of some often brutal tactics, Syria’s Christians may be breathing a small sigh of relief.

In Iraq though, the outlook for Christians remains bleak. Sectarian tensions between Sunni and Shia Muslims persist and there are still unknown numbers of Islamic State fighters hiding out in the north and west of the country.

In February, Pope Francis made a historic three-day visit to the United Arab Emirates — the first ever by a pontiff to the Arabian Peninsula — in which he held a mass attended by an estimated 135,000 mostly migrant Catholics.

Archbishop Warda has reached a bitter conclusion about what the future holds.

“Friends, we may be facing our end in the land of our ancestors. We acknowledge this. In our end, the entire world faces a moment of truth,” he said.

“Will a peaceful and innocent people be allowed to be persecuted and eliminated because of their faith? And, for the sake of not wanting to speak the truth to the persecutors, will the world be complicit in our elimination?”

The author of this story, Michael Ireland, is a self-supported media missionary with ANS. Click here to support him as a missionary journalist.
June 8, 2019
FacebookTwitterPinterestEmail