Top Posts
Colorado football coach Sanders’ unabashed faith
There’s A Light That Enters Houses With No...
Knowing the One Who Always Keeps His Word
Pregnancy Resource Centers Fight For Life Amidst Opposition
This World is Not Our Home
Lessons Learned From a Gingerbread House
Let There Be Peace on Earth
‘I Wanna Dance’ movie: Whitney Houston’s success and...
Fact Finding, Sight Seeing, and Prayer Walking
Kidney donation led to 8 life-saving surgeries
Home Tags Posts tagged with "Women of Hope"

CARY, NORTH CAROLINA (ANS) — ‘Women of Hope,’ one of TWR’s radio programs, plays a crucial life-affirming role for many listeners in societies where cultural norms assign inferior status to women.

One listener from Turkey, who contacted the TWR Women of Hope team, said: “My husband disrespects me and beats me.” 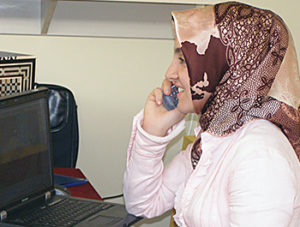 “Everyone knows, but they don’t care,” she said, adding: “For a year now, I have been listening to your program, and you have become a consolation to me. The calls I have made to you in secret are helping me a lot. Thank you for being a friend to me.”

TWR Women of Hope goes out over the airwaves and streams online in Turkish and dozens of other languages to listeners in widely divergent cultures, offering friendly conversation, practical lessons for daily life and Bible-based lessons for the soul.

There’s also the ministry’s monthly prayer calendar that goes out to prayer intercessors in more than 100 countries.

TWR also says a mother in South Africa found that forgiving is hard, but it’s often the only way to resolve a family conflict.

Sarah, not her real name,  put that lesson to the test and watched how it made a difference in her own home. Sarah joined a Zulu-language Women of Hope listening group on the day the ladies happened to be listening to a program on forgiveness.

Near the end of the program, she asked if she could borrow the audio player so she could hear the program at home.

Later, the group learned that Sarah and her husband were on the verge of a divorce because of a serious rift involving their two daughters. When disputes broke out between the girls, their father always sided with one of them and their mother sided with the other. Sarah was heartbroken over the impasse because she loved all her family.

She kept listening to the program and got her family in the habit, too.

On a Women of Hope episode about forgiveness, one of the hosts explains, “Forgiveness is not saying it didn’t matter, or making excuses for [the other person]. It’s saying, ‘That was wrong, it did a lot of harm but I’m not going to insist that you must continue to suffer for what you did.’”

Another host added, “God wants us to tell him about it. He understands our hurt and our pain, and he can help us through it.”

There is peace in Sarah’s family now, even though they have other problems needing to be addressed. At least the parents and daughters are able to forgive one another.

Sarah wrote: “If the Lord wants me to live, I want to serve him and tell everyone about his love. No one should stay in the darkness of false religion. No one should live that lie. I’m forbidden to leave my uncle’s house except to attend his religious meetings, and he forces me to go there all the time.

“Even so, nothing will stop me from spreading the good news of Jesus.”

To be a part of this movement, contact TWR at: www.twr.org/twr-women-of-hope-turkish .

NOTE: The photo is for illustration purposes and does not depict the quoted listener.