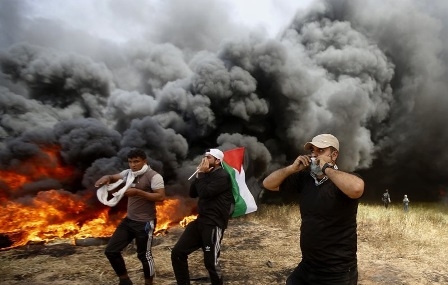 GAZA (ANS – April 11, 2018) — In order to understand what’s happening in Gaza, you will need to know some background. 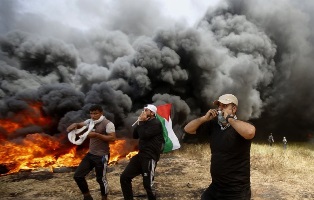 In May of 1948, Arab leaders told the Arabs of then, “Palestine,” that they will have a war with the “New” Nation of Israel.  They encouraged the Arabs to leave their homes until after the war, then they could return again.  Israel offered citizenship to the Arabs and many are now Israeli Arabs, 2.5 million!  Those who refused citizenship fled to surrounding Arab nations for refuge to wait out the war.  But to their surprise, Israel won the war after fighting with five Arab Nations.

History books record around 800,000 Arabs left “Palestine” in May of 1948, and still remain “refugees” in Arab lands because the nations would not integrate the Arabs from Palestine. (Today their descendants are also considered refugees, totaling over 6 million who want to “return” to Israel. Haaretz, April 07, 2018). During the same period over 700,000 Jews fled Arab nations to enter the new nation of Israel, and every one of them are integrated into Israel society.

From 1948 to 2005 Jews and Arabs lived in the Gaza Strip.  In 2001 Arabs in Gaza began firing rockets into Israel. After many injuries, Israel agreed to trade “Land for Peace” and moved over 8,000 Jewish people from 21 different areas of the Gaza Strip, giving it to the Arabs. Many Jews lost their businesses and some are still displaced. In return, Israel received over 13,700 rockets fired from Gaza into Israel since the move in 2005.

Hamas spokesperson Qassem, spoke of the Hamas Charter when he said on April 6th, that the Palestinians will continue their “struggle until they achieve their freedom and restore all their lands.” He said that the ‘Palestinians’ “have rights to all of the soil of Palestine (Israel).”  They will not use the word “Israel” because they refuse to acknowledge that Israel is a legitimate nation, instead they call Israel, “Occupiers” of their territory. 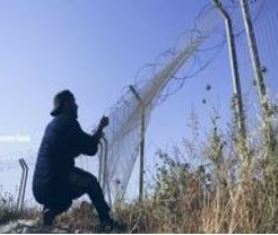 Because Muslim ‘Palestinians’ believe that Israel is their land, Hamas called the riots, “March of Return.” Hamas was conceived in 1988 with the purpose to destroy Israel. Google “Hamas Charter” to verify.  Hamas has been designated by most Western nations and some Arab nations as a ‘Terrorist organization’.

Following the riots that left 17 Palestinians dead and hundreds wounded on March 30th, 2018, Hamas called for more riots with 10,000 tires, to be burned at the Gaza border fence in hopes to screen Hamas operatives trying to penetrate Israel’s border in order to attack Israeli civilians. The Whitehouse warned Gazans to stay out of buffer zone…instead they burned thousands of tires causing chaos, injuries and fires.

Israel Defense Force (IDF) simultaneously dealt with 5 different locations along the border, each with thousands of Gazan rioters throwing Firebombs and slinging rocks at the soldiers, while others tried to penetrate the border. The IDF’s job was to stop infiltration into Israel and protect its people. Hamas has been penetrating Israel’s border for years, even by digging tunnels into Israel.

Leaders of Hamas said money would be given to Gazans “As compensation within the framework of “Social welfare.” It stated that it will pay $3,000 to families of rioters who are killed, $500 to the seriously wounded and $200 to those moderately wounded. Hamas told women and children to take mirrors and lasers to distract soldiers at fence.  Hamas forced managers of Gazan bus companies to transport rioters, also threatened, and arrested bus drivers who would not take operatives to the border fence.

Problems will continue because Israel will not give their Land to Islam, and the Muslims will not stop fighting for what they claim is theirs.

Photo captions:1) Protesters in Gaza. (AP Adel Hana). 2) At the border fence in Gaza. 3) Len and Cheryl Hancock Watts at the KWAVE studios after Dan Wooding’s interview with Cheryl. 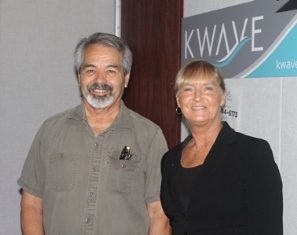 About the writer: Cheryl Hancock-Watts is a native Californian who moved to Israel in May of 1999 as a Christian and Journalist. She gets involved with the various people groups of Israel taking aid and hope to those in need, while bringing truth concerning Israel via the media to the West. Cheryl has been a member of the International Press Association since 2001 and a member of the Government Press Office in Jerusalem. She provides radio interviews from Israel to stations in the U.S., and is a free-lance writer for various media outlets. Cheryl married Len Watts in 2014, and together they continue the work in Israel while speaking internationally in churches, and through radio and TV broadcasts. You can receive their “Israel Updates” at: reportingfromisrael@gmail.com

Note: To listen to my recent interview with Cheryl on my “Front Page Radio”, please go to http://frontpageradio.net/frontpageradiofiles/CherylHancock-WattsFPR20171001Mono.mp3

** You may republish this, and any of our ANS stories, with attribution to the ASSIST News Service (www.assistnews.net). Please also tell your friends that they can receive a complimentary subscription to our news service by going to the ANS website (see above) and signing up there.

A Tale of Two Worlds That Have Become...

How Billy Graham Helped Me and YWAM through...

How a Gentle Giant Helped Me ‘See’ my...

By Cheryl Hancock-Watts, Reporting from Israel, Special to ASSIST News Service GAZA (ANS – April 11, 2018) -- In order to understand what’s happening in Gaza, you will need to know some background. Muslims believe that once they conquer a territory, it’s forever a part of the Islamic world. Israel h