Top Posts
Water and the Word, for Life, In Jesus’...
Voiceless Mass: Raven Chacon Wins the Pulitzer
Bob Dylan Center Now Open
Finding Rest for Our Weary Souls
This Much He Knows to Be True: Nick...
Fact Finding, Sightseeing, and Prayer Walking
My Rushmore: Pocahontas, Dock, Sauer, and Bustill
Living Life on Purpose for God’s Kingdom
Leadership for Life
How God Transformed a Community
Home ANS Feature What Happened to the Extortion Man?

What Happened to the Extortion Man?

Wills Point, USA (ANS) – Under the morning sky, the vegetable sellers braced themselves as a familiar man with a long, lined face approached their stalls along the highway. For the past three years, the man, Andru, had usually inspired their dread and hatred. With threats and harassment, he manipulated them into selling him vegetables at a low price, and they felt powerless to stop him.

Andru earned a living for his wife and five children by selling vegetables. He rose early in the morning and went to the highways where people from other villages sold vegetables. After pressuring vendors to sell him produce at a deep discount, Andru returned to his own town market and sold his newly acquired vegetables for a much higher price. The other townspeople knew he was taking advantage of people, but they didn’t know how to stop his extortion.

Eventually, they told GFA pastor Micha, who leads a congregation in Andru’s town, about Andru’s behavior. Pastor Micha attempted to counsel him, but when the pastor encouraged Andru to live an upright life, an argument erupted. Andru rejected Pastor Micha’s advice, complaining the pastor was just being an accuser.

But as days passed, the pastor’s words rang in Andru’s mind. What if the pastor was right? Had Andru alienated himself from other people? Was it possible for him to change? 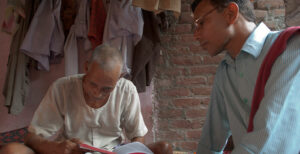 Through the Bible and Pastor Micha’s friendship, Andru (not pictured) grew to know Christ, and it transformed his life.

As conviction flooded Andru’s heart, he swallowed his pride, realizing there was truth in the pastor’s words. Andru went to Pastor Micha’s home, admitted he had been wrong and asked for forgiveness. Gladdened by Andru’s change of heart, Pastor Micha encouraged the remorseful man, giving him hope for transformation. Stop taking advantage of other people, the pastor advised, and start a new life.

From that day on, Andru often talked to Pastor Micha to learn more about God and His Word. The promises of Scripture permeated Andru’s mind, overwhelming him with a fresh sense of peace and joy. When Pastor Micha saw Andru’s hunger for the Lord, he offered his new friend a gift that would open his eyes to the eternal promises of God: a New Testament.

Andru didn’t take the blessing of having his very own copy of God’s Word for granted. He read Scripture every morning and during his free time throughout the day. As Andru absorbed the New Testament, words of truth and hope restructured the landscape of his mind, replacing pride and selfishness with a motivation to follow God’s commandments. Soon, his life changed dramatically.

The next time Andru traveled to the highways and approached the vegetable sellers, they were shocked. They didn’t hear any threats. They didn’t sense any manipulation coming from the man who had so often bullied them. Instead, he spoke to them respectfully and kindly and asked for a fair price. They soon learned Andru had stopped deceiving people to earn money at the expense of others.

Now, when Andru walks up to the vegetable sellers, they are so glad for his new, polite behavior that they give him low prices out of sheer joy.  Andru’s surprising and welcome transformation has stirred many to ask him one question: How did he become a kind person?

“I was a sinner with [a] self-seeking [attitude],” he tells them. “I did not realize many people hated me because of what I used to do. But my life changed after hearing from God’s Word.”

Because God’s Word gave him a desire to know and follow God, Andru is a new creation in Christ. He now has positive relationships with people in his community, and he actively participates in Pastor Micha’s congregation. Andru encourages others to find the same transformation he’s experienced: “You, too, please taste God and see once in your life before you [have regrets] about your life.”

Ukraine Christians In Grave Danger of Losing Their...