Why This Jewish Man May Go Barefoot For Life

When Mother Teresa invited a man dressed as a clown to her homes for children, destitute and dying in Calcutta (now Kolkata) in 1979, her intent and his was to bring the kind of joy Jesus spoke of in John 15:11 to India. Snuggles, the love clown, produced smiles and extreme joy.

But the Jewish man in clown suit, make-up and big red nose received a gift as contagious as joy: Mother Teresa’s care for the poor. “That was the first contact I had with her,” says Dr. Jeff Brodsky. “She’s been one of my heroes for many years.”

Forty years later, Brodsky is still fighting for victims of evil that neither he nor Mother Teresa could have imagined when they met in 1979.

Four years after meeting Mother Teresa, Brodsky focused like a laser on the red-letter-words of Jesus while reading his Bible: “I speak these things to you so that my joy would be in you and that your joy would be complete.” On that day, Brodsky envisioned homes for suffering children – “the least of these,” in Jesus’ words – wherever he found them. The ministry, JOY International, was born in 1981.

India, China, Russia, Bangladesh, Pakistan, Mexico, Uganda, Kenya, Venezuela and Fiji are among the 70 nations where JOY worked for many years with ministries and homes providing care for abandoned and orphaned children, fulfilling its purpose and calling.

What Mother Teresa and Snuggles didn’t envision is Brodsky without his clown shoes – or for that matter any shoes – and new kinds of evil perpetrated against children.

Yet, in 2010, Brodsky put on shoes and socks for the last time after ministering with his friend, the Reverend Jim Meyers, to children living in and around a garbage dump in Phnom Penh, Cambodia. All the children were barefoot and, worse in the minds of Brodsky and Meyers, they were vulnerable to sexual predators looking to make a quick buck.

In the five years between receiving an honorary Doctor of Divinity degree from Promise Christian University in 2005, and his and Meyer’s 2010 ministry to Cambodian children, Brodsky took aim at abusive exploitation of children. It refocused his heart and JOY International’s original vision dating back to meeting Mother Teresa.

On July 19th of this year, Brodsky marked nine sockless and shoeless years of solidarity with poor and vulnerable children. Eight days later, on July 27th, he and other barefoot walkers trekked a mile to raise funds in the fight against sex trafficking, the 30th Barefoot Mile event in Colorado.

Before the walk, which began in a park nearby Columbine High School in Littleton, Brodsky announced a coast-to-coast barefoot bicycle ride next year to raise money and awareness in the fight against child sex-trafficking. Since the first Barefoot Mile event in Colorado, Brodsky’s home, thousands of walkers in numerous states and countries have joined him in shoeless solidarity.

“We have one coming up in Lancaster, Pennsylvania, really all over the place, another in Phoenix in February. We’re trying to arrange another one this year in Orlando. Lansing, Michigan is another I’ve been invited to do several times,” Brodsky says.

“I’m thankful for people like you who are working hard to eradicate sex-trafficking from our communities and throughout the world,” Senator Dan Sullivan told Brodsky. “You have turned your compassion into action, and it’s truly making a difference.” 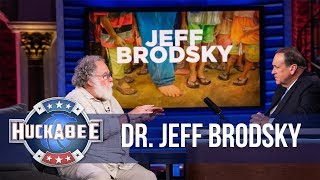 Indeed JOY is changing lives. Two lawyers, two nurses, several business owners, saleswomen, production workers and a bank teller reintegrated with their communities after being rescued from the commercial sex-trade, a fast-growing $150 billion industry according to the latest United Nations Trafficking In Persons (TIP) and Commercial Sexual Exploitation of Children (CSEC) reports.

The youngest rescued was 4 -years-old, Brodsky says, adding “rescue is primary but after that JOY has other priorities.”

JOY works closely with Agape International Missions (AIM) and SWAT and partners in juvenile protection, police, government. Highly-trained officers, who look for underage girls held as sex slaves in fronts for brothels, carry out the first priority: rescue. Training for teams costs $15,000; in 1018, JOY funded five teams in 2018, one in Central America for the first time.

From Clement Park, across the street from one of the nation’s deadliest school shootings, Brodsky announced plans to pedal a bicycle 2,700 miles barefoot. The coast-to-coast shoeless ride will begin at Disneyland in Anaheim, California on April 1, 2020 and end at the entrance of Epcot at Disney World in Orlando, Florida.

“Disney parks are known as ‘the happiest places on earth,’ says Brodsky. “I’m riding to bring awareness and raise funds to fight the evil of child and teen trafficking of girls who will never know any happiness until they are set from their bondage,” Brodsky says.

“Why Am I Barefoot” is a children’s book written by Brodsky, published this year. It teaches children – not about the child-sex trade – but about modern-day slavery in a way they can relate.

“I spoke at an elementary school three years ago,” Brodsky says, “using as an object lesson two teachers and six students. The teacher assured (the principal) I would be discreet in mentioning the sex part.

“He told me, ‘what you just did was truly fascinating. You need to create a children’s book.’ It’s taken me over three years to get it done,” Brodsky says.

The Least of These is another title dealing with Brodsky’s life, call to ministry as founder of JOY International in 1981, and 3,000-plus days without shoes or socks.

After going barefoot for one year – Brodsky’s promise to God – he was looking forward to putting on socks and shoes for the first time on July 19, 2011.

“That morning when I went to put a pair of socks on (I was really excited), I just couldn’t get them past my toes. It was as if an angel was pulling them and preventing me from putting them on. I cried out to God and said, ‘Lord, what do you want from me? I just went barefoot for a full year.’

“His response to me in a still, small voice was: ‘Keep going. Those children are still out there,” Brodsky says.

Going barefoot the rest of his life is an option if it motivates even one person to fight against trafficking, he says.