Top Posts
Johnny Cash movie: His life, loves, challenges and...
A Walk of Faith Begins with a Step...
God is Rich in Mercy
Everyone has a Story to Share
‘Till’ movie: Racial murder helped spark civil rights...
Leaning His Head On Jesus, This Evangelist Hears...
Timing, common ground, and fruitfulness in witness
Step Out of the Traffic
In Support of Ukraine
Living an Imperfect, Unfinished Life
Home ANS Reports Yards of Mesh to Shield and Unite 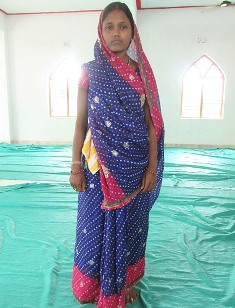 WILLS POINT, TX (ANS – January 23, 2018) — It wasn’t much to look at — Shara could see right through it, in fact. But the simple threads that interlaced together in a tight mesh wove significantly into Shara’s life. Without it, her family would not be what it is today — someone might have even died.

Shara’s life was typical for girls in her area. She married her bridegroom, Jitan, and soon a son and a daughter joined the young family, bringing honor and joy to the couple. Time passed, and Jitan began working in a distant city.

Although she knew little about Christ, she did not reject her father’s offer to pray to Jesus for her healing. When her parents had decided to live for Jesus, Shara had watched them with indifference. If my parents are happy and peaceful with any religion, it is up to them to follow that religion, she thought. If they are happy becoming Christians and they are doing well, that is okay for them.

But after her father’s prayer was answered and she received healing from the Lord, the name of Jesus gained new meaning to her. Seeds of belief sprouted in her heart, but fear of her community and husband kept Shara from pursuing a deeper understanding about the God who healed her.

More Powerful Prayers from a Father

Her father’s prayers entered Shara’s life again when her 5-month-old daughter fell ill. Unable to digest milk, the tiny child grew weaker and weaker. Jitan, who now worked near home again, helped his wife carry their daughter and the appropriate sacrificial items to a witchdoctor. After the ceremony, their baby seemed to regain health — but a fever returned just six days later.

Motherly concern flooded Shara’s heart as she cradled her flushed baby. She took her struggling daughter to receive medication every day. But remembering her own story of healing, Shara also brought her child to her father’s home. He asked Jehovah Rapha, the God who Heals, to again move on behalf of his family and heal his granddaughter.

For 17 days, he prayed. And the Lord answered his pleas.

Relived at her daughter’s deliverance from the illness, Shara secretly responded to God’s mercy.

“Thanks to God,” she said. “I dedicate my daughter and my life in God’s hands.”

Shara gave Jesus a home in her heart, while Jitan continued in his traditional religion. So on Sundays, without her husband’s knowledge, Shara accompanied her father to church where she praised God and prayed for her husband’s transformation.

Although Shara and her daughter experienced healing, disease still lurked near the family. 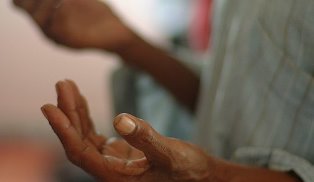 They lived in a hot land dotted with sparse trees and dusty hills. Temperatures often soared above 100 degrees for weeks on end. In such hot climates, water was essential in fighting dehydration and heat-related illnesses.

Jitan and other daily laborers tried to shield themselves from mosquito bites while they worked, but they had no protection at night — their sparse daily earnings left them no extra money to buy things like mosquito nets.

In 2015, one of those disease-laden mosquitoes found Shara’s husband. Soon, a fever raged as malaria parasites coursed through Jitan’s body.

Malaria was no stranger to the people in this region — according to a World Health Organization study1, 1.5 million cases of malaria were confirmed that year in 11 countries, including Jitan and Shara’s. While Jitan turned to medical doctors for treatment, Shara turned in hidden prayer to Jesus. Jitan recovered after three weeks of prayer and treatment and credited his healing to the medicine. But although he survived, Jitan and his family remained defenseless against future cases of malaria.

Five months after Jitan’s recovery, the GFA-supported pastor at Shara’s church organized a gift distribution for people in the community. He knew about Jitan’s struggle with malaria, so he put Shara’s name down and also 149 others who would receive a mosquito net.

On the day of the distribution, 97-degree sunshine warmed Shara’s skin as she went home with her precious mosquito net. These yards of fabric meant her family would be safe at night from mosquito bites, and it represented how God saw even their small needs.

“My husband suffered with malaria fever,” Shara said. “Consequently, he is physically weak. But this mosquito net will be protection for my family now.”

When Jitan saw the gift, new thoughts rolled into his mind. “Christians not only pray for people,” he said, “but they also fulfill the basic needs of people” in their community. A new respect and appreciation arose in his heart — so much so, that instead of being upset at discovering his wife’s faith, he decided to go with her to a worship service!

In the days to follow, Jitan and Shara worshiped together at the feet of God, learning more about Christ’s redemptive love.

Every night, they crawled under the safety of their mosquito net with their two children. Thinking about God’s provision and kindness toward his family, Jitan excitedly told his wife, “Really, the Lord Jesus is fulfilling our basic need.”

Mosquito nets save lives. While there is treatment available for those infected with the malaria parasite, some parasites are developing an immunity2 to medications. As with every disease, “prevention is better than cure.”

That’s why GFA-supported workers distributed more than 600,000 mosquito nets just in 2016. Mosquito nets are simple enough for children to use — which is especially important considering an estimated 303,000 children globally3 under the age of 5 perished from malaria in 2015.

Note: Gospel for Asia (http://www.gfa.org/) has — for more than 30 years — provided humanitarian assistance and spiritual hope to millions across Asia, especially among those who have yet to hear the Good News. During last year, this included more than 75,000 sponsored children, free medical services for more than 180,000 people, 6,000 wells drilled, 11,000 water filters installed, Christmas presents for more than 400,000 needy families, and spiritual teaching available in 110 languages in 14 nations through radio ministry.

To schedule an interview with a Gospel for Asia representative, please contact pressrelations@gfa.org, or go to http://www.gfa.org/press.

To give a gift for mosquito nets, please go to: https://www.gfa.org/gift/browse/gifts-for-the-poor/#product-mosquito-nets

Photo captions: 1) This is Shara. Her parents chose to follow Jesus, but she wasn’t interested in Him. Then sickness overtook her family, and she experienced God’s power to heal. (GFA). 2) Prayer played a significant role in Shara’s journey to Jesus. (GFA). 2) Through the prayers of her father, Shara and her baby daughter both experienced healing from serious illnesses. 3) Malaria, carried by mosquitos, affects millions of people in Asia, but many families can’t afford a mosquito net. GFA-supported gift distributions have provided hundreds of thousands of mosquito nets for people, including Shara. (GFA). 4) A few yards of mesh netting can change the future of a family, giving them better health and the chance to understand that God sees their every need! (GFA).

** You may republish this or any of our ANS stories with attribution to the ASSIST News Service (www.assistnews.net). Please tell your friends and colleagues that they can receive a complimentary subscription to our news service by going to the above ANS website and signing up there.