Top Posts
There’s A Light That Enters Houses With No...
Knowing the One Who Always Keeps His Word
Pregnancy Resource Centers Fight For Life Amidst Opposition
This World is Not Our Home
Lessons Learned From a Gingerbread House
Let There Be Peace on Earth
‘I Wanna Dance’ movie: Whitney Houston’s success and...
Fact Finding, Sight Seeing, and Prayer Walking
Kidney donation led to 8 life-saving surgeries
The Power of Curiosity
Home Tags Posts tagged with "Abu Dhabi"

UNITED ARAB EMIRATES (ANS) — The authorities of the most important and most extensive region of the United Arab Emirates has announced the beginning of a legal process through which 19 worship places of faith minorities in their territory are to be given a license to operate legally. 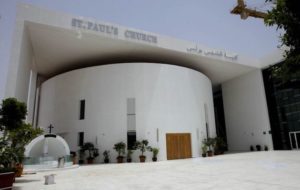 View of St. Paul’s church, in the industrial area of Mussaffah, in Abu Dhabi. Gulf News

According to the Abu Dhabi executive Director for the Community Development Department, Sultan Al Daheri, 17 of these religious communities are Christian, one is Hindu and another is Gurdwara Sikh. “Tolerance, mutual respect and cooperation are fundamental for a nation that seeks to create harmony among diverse sectors of society,” Al Daheri said.

“The department is working on the framework that will facilitate the requirements to give worship licenses and organise mechanisms to serve all religions and sects.”

Evangelical Focus newsletter http://evangelicalfocus.com reports the Director of Open Doors Spain, Ted Blake, reacted to the news after being in touch with Christian sources in the Persian Gulf. They see this initiative with good eyes.

“This is apparently a serious initiative started by the Arab United Emirates. We want to trust that their intentions are good and that the outcome of this initiative is beneficial for the local Christians. [Authorities] have spoken to local Christians to let them know they want, to listen to them and know their concerns to help their needs.”

Nonetheless, “precaution” is needed, says Blake. “This could be nothing more than a campaign to improve the image of the country in the world, giving an image of an open and tolerant country, which can in its turn improve commercial relations with the exterior.”

The decision of offering licenses to minority faith communities comes four months after the visit of Pope Francis. The head of the Roman Catholic Church then said: “It seems a country that is open, not closed. Religiosity too: Islam is an open Islam, not closed, of dialogue, an Islam of fraternity and peace.” Francis seemed to encourage more religious freedom.

8% Of The Population of the Emirates is Christian

According to Joshua Project, 7.9% of the population of the Emirates is Christian, and 1.3% evangelicals. The average growth of Christians in the country (5.5%) is higher than the global average (2.6%).

According to Open Doors in Spain based on conversations with local Christians, “a prudential time is needed, to see how the worship places will be administered.”

The details of the legalisation of church buildings will only be made public as they are implemented.

The legalisation of these 19 non-Muslim worship places comes just weeks after the Austrian Parliament called to close the KAICIID, the centre of inter-religious dialogue funded by Saudi Arabia, Austria and Spain. It was a reaction to the news of a new execution of a political opposition leader in Saudi Arabia.

Speaking about Saudi Arabia, Blake said: “It is a contradiction that a country that does practically allow no religious expression a part from that of its political leadership finances a centre for religious dialogue.

The author of this story, Michael Ireland, is a self-supported media missionary with ANS. Click here to support him as a missionary journalist.
July 17, 2019
FacebookTwitterPinterestEmail