Top Posts
Pregnancy Resource Centers Fight For Life Amidst Opposition
This World is Not Our Home
Lessons Learned From a Gingerbread House
Let There Be Peace on Earth
‘I Wanna Dance’ movie: Whitney Houston’s success and...
Fact Finding, Sight Seeing, and Prayer Walking
Kidney donation led to 8 life-saving surgeries
The Power of Curiosity
When Love Came Down at Christmas
A Walk of Faith Begins with a Step...
Home Tags Posts tagged with "Against The Tide"

FRANKLIN, Tennessee (ANS) – Internationally renowned speaker and author on the interface of science, philosophy, and religion, Oxford University Professor Dr. John Lennox has dedicated his life to standing up against the rising tide of atheism by sharing the rational foundations of his belief.

His recent documentary, AGAINST THE TIDE: Finding God in an Age of Science is a theatrical-length documentary that serves as both a biography and travelogue.

Joined by veteran actor, director, and producer Kevin Sorbo (Hercules, GOD’s NOT DEAD, Supergirl), Lennox candidly shares the story behind his high-profile encounters with world-renowned atheists on very public debate stages. The pair travel from Oxford to Cambridge to Israel to experience firsthand what has inspired and fueled Lennox’s passion to present compelling evidence that science and history not only align with scripture but actively support the biblical narrative. 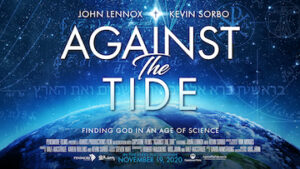 Against The Tide helps align Science with Scripture

Now, the documentary has just been awarded two nights of encore screenings in theaters nationwide.  Originally launched as a one-night-only event on November 19, strong ticket sales and additional consumer demand have allowed Fathom Events to honor the film with two additional screenings on November 20 and 23.

New theaters are being added daily. Single tickets, as well as group sales options, are now available at www.againstthetide.movie.

Created by Pensmore Films and Kharis Productions, and distributed by Fathom Events, AGAINST THE TIDE is certain to be a legacy resource for homeschool groups, churches, Christian schools, and science and apologetics-loving people of faith for decades to come.

Dr. John Lennox, professor emeritus of mathematics at the University of Oxford, is an internationally renowned speaker and author. His books, which span the fields of science, philosophy, and religion, include God’s Undertaker: Has Science Buried God?, God and Stephen Hawking, Can Science Explain Everything?, Gunning for God, Where Is God In A Coronavirus World? and, 2084: Artificial Intelligence, the Future of Humanity, and the God Question.

Prof. Lennox has traveled the world defending the rationality of Christianity and belief in God, and has debated some of the world’s most prominent atheists, including Richard Dawkins, Christopher Hitchens, and Peter Singer, among many others. Throughout, Lennox stands firm: “Properly understood, the evidence inexorably points to the existence of a creator God.”

Kevin Sorbo, a more than 30-year veteran Hollywood actor, director, and producer is best known for his lead roles in Hercules: The Legendary Journeys, one of the highest-rated syndicated television programs in the world, as well as for TV series Andromeda and Supergirl, and motion pictures God’s Not Dead and Let There Be Light, among many, many others. “I am frequently berated by Hollywood compatriots for my Christian faith,” Sorbo says. “Bringing Against The Tide to the screen seemed a great opportunity to learn how to respond from a master in turning the atheist manifesto on its head. Furthermore, I get to appear as ‘myself!’”

Pensmore Films develops and produces motion pictures and multimedia releases on some of the most important existential topics of today – the credibility, validity, and relevance of the Christian worldview, and its complementary relationship with science and the universe.  An outgrowth of the nonprofit Pensmore Foundation, Pensmore Films produces movies, such as Against The Tide, through which it seeks to dispel misinformation and strengthen understanding of the most important questions about human existence and purpose. www.PensmoreFilms.com

Kharis Productions is an independent film and television production company based in Hamilton, Scotland. With noted achievements in documentaries, docudrama, Children’s TV, feature film, news, current events, and training, Kharis has developed a particular expertise in religion and education projects. The Kharis team has produced programs for most UK broadcasters as well as several overseas broadcast networks. www.KharisProductions.com

Fathom is a recognized leader in the entertainment industry as one of the top distributors of content to movie theaters in North America. Owned by AMC Entertainment Inc. (NYSE: AMC); Cinemark Holdings, Inc. (NYSE:CNK); and Regal Cinemas, a subsidiary of the Cineworld Group (LSE: CINE.L), Fathom operates the largest cinema distribution network, delivering a wide variety of programming and experiences to cinema audiences in all of the top U.S. markets and to more than 45 countries.  For more information, visit www.FathomEvents.com.