Top Posts
Colorado football coach Sanders’ unabashed faith
There’s A Light That Enters Houses With No...
Knowing the One Who Always Keeps His Word
Pregnancy Resource Centers Fight For Life Amidst Opposition
This World is Not Our Home
Lessons Learned From a Gingerbread House
Let There Be Peace on Earth
‘I Wanna Dance’ movie: Whitney Houston’s success and...
Fact Finding, Sight Seeing, and Prayer Walking
Kidney donation led to 8 life-saving surgeries
Home Tags Posts tagged with "Aid to the Church in Need"

Aid to the Church in Need

NEW YORK, NEW YORK (ANS) — While you might have seen a decrease in mainstream media reporting regarding Christian persecution, there has only been an increase in the persecution taking place against Christians around the world.

According to the Gatestone Institute, as reported by Lindsay Elizabeth for Faithwire, persecution of Christians by extremist groups and individuals is continuing to climb, as the persecution has become more systematic than random. 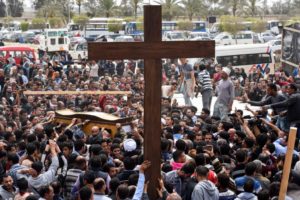 Mourners carry a large cross and the coffin of one of the victims of the blast at the Coptic Christian Saint Mark’s church in Alexandria the previous day during a funeral procession at the Monastery of Marmina in the city of Borg El-Arab, east of Alexandria on April 10, 2017.
Egypt prepared to impose a state of emergency after jihadist bombings killed dozens at two churches in the deadliest attacks in recent memory on the country’s Coptic Christian minority. / AFP PHOTO / MOHAMED EL-SHAHED (Photo credit should read MOHAMED EL-SHAHED/AFP/Getty Images)

According to Faithwire, in their latest “Religious Freedom Report,” Aid to the Church in Need warned that around 300 million Christians around the world have been subjected to violence, making Christianity the most persecuted religion in the world.

Raymond Ibrahim of the Gatestone Institute argued that that statistic demonstrates that it is much more difficult for a Christian to live in a Muslim country than a Muslim to live in a Western country.

He cited a study done by Voices in Europe where they pointed out that the chances of being killed as a Christian, simply for being a Christian, in a Muslim country is incredibly high.

“This makes the odds of a Christian in a majority-Muslim country being murdered by a Muslim – simply for being what he is – approximately one in 70,000,” Europe Voice pointed out.

Persecution is taking place all over the world

A few weeks ago, the archbishop of Irbil spoke about how “political correctness” in Western countries would lead them to become “complicit” in the persecution of Christians all over the world, but specifically in the Middle East.

As reported by Faithwire News, Bashar Warda, the archbishop, made the comments in London a few weeks back when he addressed the failure of Western countries to condone the extremism as what it is “a cancer.”

“Will you continue to condone this never-ending, organized persecution against us?” he asked. “When the next wave of violence begins to hit us, will anyone on your campuses hold demonstrations and carry signs that say, ‘We are all Christians?’”

His comments came at a time where the country of Iraq is trying to rebuild in so many different ways. Five years ago, ISIS landed in the region and started to slowly take over.

It didn’t take much time before the whole entire country was under the grip of the extremist group.

Faithwire reports that Christians who had lived in the Nineveh Plains fled for their lives, some making it to other countries, where they would live for years, others not reaching a destination.

Faithwire stated that over the past 9 months, Iraqi Christians have been slowly returning to their homes in the Nineveh Plains, many returning to complete destruction.

Faithwire said the numbers regarding Christian persecution are so staggering that it is nearing the international definition for “genocide.”

Recently a report, commissioned by British Foreign Secretary Jeremy Hunt, concluded that Christian persecution is climbing so remarkably fast that it will soon be considered a genocide.

As previously reported by Faithwire News: “the study, overseen by Bishop of Truro the Right Reverend Philip Mounstephen, discovered that one in three people suffer from religious persecution, with Christians being the most oppressed of them all.”

“The inconvenient truth,” the report reads, is “that the overwhelming majority (80%) of persecuted religious believers are Christians.”

“Evidence shows not only the geographic spread of anti-Christian persecution but also its increasing severity,” the bishop wrote, noting that the faith “is at risk of disappearing” if Christians and others around the world do not take action.

Faithwire  concluded that “whether it is the banning of crosses in China, or the burning of churches in France, or the violent attacks in Nigeria, the goal of the persecutors is clear: to wipe the name of Jesus Christ off the face of the Earth.”

The author of this story, Michael Ireland, is a self-supported media missionary with ANS. Click here to support him as a missionary journalist.
June 4, 2019
FacebookTwitterPinterestEmail