Top Posts
There’s A Light That Enters Houses With No...
Knowing the One Who Always Keeps His Word
Pregnancy Resource Centers Fight For Life Amidst Opposition
This World is Not Our Home
Lessons Learned From a Gingerbread House
Let There Be Peace on Earth
‘I Wanna Dance’ movie: Whitney Houston’s success and...
Fact Finding, Sight Seeing, and Prayer Walking
Kidney donation led to 8 life-saving surgeries
The Power of Curiosity
Home Tags Posts tagged with "Algerian Christians"

TIZI-OUZOU, Algeria (ANS) — A Christian protest of Algeria’s church closures resulted in an order on Sunday (Oct. 13) to seal the church building of the head of the umbrella group of Protestant churches, the leader said.

Salah Chalah, head of the Protestant Church of Algeria umbrella group (l’Église Protestante d’Algérie, or EPA), said the order he received yesterday for the closure of his Protestant Church of the Full Gospel of Tizi-Ouzou (EPPETO) on Wednesday (Oct. 16) came in retaliation for a sit-in that Christians organized at the Bejaia Province headquarters on Oct. 9.

The closure was ordered by the governor of Tizi-Ouzou Province. 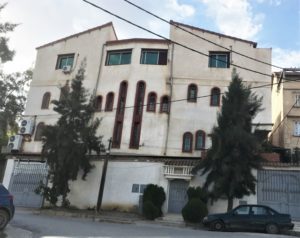 Building of the Protestant Church of the Full Gospel of Tizi-Ouzou, or EPPETO.

“To shed light, this last notification is not the result of coincidence, but a provocative response to the sit-in of Oct. 9 in front of the Bejaia Province headquarters,” Pastor Salah said.

When the Christian leaders received a visit from police yesterday notifying them to go to the central police station at 3 p.m., he and fellow pastor Tarek Berki arrived to find the closure notice dated Oct. 9, when leaders of various EPA-affiliated churches staged the sit-in, he said.

“After Tarek read the notification, they asked me to sign it, which I refused to do,” Pastor Chalah told Morning Star News. “But they said they were going to act anyway. Then I told them, ‘Anyway, on your arrival, we will wait for you as many as possible inside the room of worship in praise and prayer. That’s our way of opposing your actions.’”

Pastor Chalah explained to police that he had nothing against them personally, but that the church leaders wanted to get the attention of their superiors who are ordering church closures. The closure was ordered by the governor of Bejaia Province.

Authorities have engaged in a systematic campaign to close Christian places of worship and other Christian institutions since November 2017 based on a 2006 ordinance, Law 06/03, stipulating that all non-Muslim worship must be carried out in buildings designated for that purpose, though the government has failed to consider any applications, according to Middle East Concern (MEC).

A 500-member Protestant church in Makouda, about 25 kilometers (15 miles) from Tizi-Ouzou, today also received an order that its building would be closed, in this case on Tuesday (Oct. 15), according to pastor Nourredine Benzid. Pastor Benzid is the secretary of the EPA.

The closure order would bring to 12 the number of churches closed on the basis of “non-Muslim worship practice without permission,” and three other churches in Oran that have re-opened are threatened with closure, Pastor Chalah said.

The governor of Oran Province, 414 kilometers (257) miles west of Algiers on the Mediterranean coast, has filed a court complaint against the re-opened churches for non-conformity with Law 06/03. Without authority to close the churches, he has undertaken a judicial route, church leaders said.

Representatives of the EPA, which has 46 affiliate churches, have traveled to France, Brussels, the United Kingdom and the United States to explain their plight and seek support. They seek reopening of the worship places, the end of Law 06/03 and freedom to import Bibles and other Christian literature.

Pastor Youssef Ourahmane, vice president of the EPA, told a French-language magazine that the government wants to definitively close as many churches as possible and dissolve the EPA, officially recognized since 1974. As a result the church leaders of Tizi-Ouzou said that they would not remain idle in the face of these unjustified threats but that they would stage various peaceful demonstrations, he said.

Islam is the state religion in Algeria, where 99 percent of the population of 40 million are Muslim. Since 2000, thousands of Algerian Muslims have put their faith in Christ. Algerian officials estimate the number of Christians at 50,000, but others say it could be twice that number.

Algeria ranked 22nd on Christian support organization Open Doors’ 2019 World Watch List of the countries where it is most difficult to be a Christian, up from 42nd place the previous year.