Top Posts
Knowing the One Who Always Keeps His Word
Pregnancy Resource Centers Fight For Life Amidst Opposition
This World is Not Our Home
Lessons Learned From a Gingerbread House
Let There Be Peace on Earth
‘I Wanna Dance’ movie: Whitney Houston’s success and...
Fact Finding, Sight Seeing, and Prayer Walking
Kidney donation led to 8 life-saving surgeries
The Power of Curiosity
When Love Came Down at Christmas
Home Tags Posts tagged with "All Nations International"

KANSAS CITY, MO (ANS) — All Nations International Founder Floyd Lee McClung, Jr., global missions leader, bestselling author and international speaker, died on Saturday, May 29, 2021 in Cape Town, South Africa, after an extended illness he had battled since 2016, and which had left him incapacitated, hospitalized and unable to speak for more than five years. He was 75. 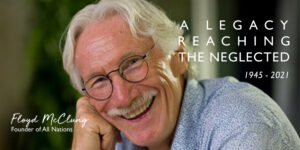 In his more than 50 years in full-time ministry, McClung lived in Africa, Asia, Europe and North America, worked on every continent except Antarctica, and authored 18 books, including the international bestseller The Father Heart of God.

A tireless traveler and speaker, McClung spoke and lectured on more than 100 college and university campuses, traveled to more than 190 countries, made dozens of TV appearances, and saw his life and work featured in countless publications, including Time magazine and The New York Times.

After spending his freshman year at Taylor University in Indiana, McClung transferred to Southern California College (now Vanguard University) in 1964, where he was elected student body president and named captain of the basketball team. He graduated in 1967 with a Bachelor of Arts in New Testament Studies.

McClung first joined Youth With A Mission (YWAM) on missions trips during school breaks from college. On a 1965 spring break outreach in Las Vegas, Nevada, he met his future wife Sally. They got engaged in 1966 in Jamaica.

Because dating was not permitted on outreaches, Floyd proposed to Sally by handing her a note while standing in line for refreshments after a meeting. She responded with a note of her own the following day. They married the next year, and celebrated their honeymoon by leading a missions trip to the Caribbean.

“Our married life was full of adventure from day one,” said Sally, “although I don’t recommend a honeymoon outreach with 75 young people for everyone!”

While newly married, the McClungs traveled the country recruiting young people for summer missions trips to the Caribbean. In 1971, following a yearlong around-the-world outreach, they moved to Central Asia, where they led missional communities in India and Afghanistan along the hippie trail followed by many young Westerners.

In 1973 they moved to the Netherlands, where they led the work on the Ark, two houseboats moored behind Amsterdam’s Central Station that served as an outreach center among hippies and drug addicts.

After the Ark, McClung pioneered other ministries in the Netherlands, most famously in Amsterdam’s Red Light District, while continuing to grow in his international leadership role in YWAM. He served a total of 35 years with YWAM, including 18 years in the Netherlands and nearly eight years as YWAM’s International Executive Director.

YWAM co-founders Loren and Darlene Cunningham said, “Floyd McClung was a vital foundational leader, serving for many years in YWAM. He pioneered works in Afghanistan, India, Nepal, the Netherlands, California, Colorado and other locations. His life, his teaching, his books, his leadership and his Godly influence deeply impacted YWAM. He has so much lasting fruit – both inside YWAM and among those who came to Jesus through the initiatives he led. Only eternity will reveal the depth and breadth of his legacy.”

In 1991, McClung moved back to the United States and started the first of many leadership training programs, and in 1993 Floyd and Sally co-founded All Nations, an international leadership training and church-planting network. Their vision for All Nations was “to see Jesus worshipped by all peoples of the earth, reaching the least, the last and the lost.”

Initially under the umbrella of YWAM, All Nations eventually became an independent organization and now has hundreds of full- and part-time workers in over 40 countries worldwide.

McClung left YWAM to join Metro Christian Fellowship (MCF) in Kansas City, Missouri, where he pastored from 1999-2005. Since 2006 the McClungs have lived and worked in South Africa.

Don Stephens, founder of Mercy Ships, recalled his time as McClung’s co-worker in their early years in YWAM. “Floyd McClung was a world changer of the highest order. Inside his towering 6-foot-6 frame were a heart, soul and mind of gentleness, sharpened through active listening to the issues of our generation. Floyd held a rare capacity for offering intimate friendship and trust. He inspired thousands through his prophetic speaking and writing. It was one of my life’s great privileges to have been his colleague and friend.”

In his lengthy career, McClung wrote 18 books, numerous booklets and countless introductions, forewords, essays, articles and chapters for books and other publications. His most well known title, The Father Heart of God, has sold an estimated two million-plus copies in nearly 40 languages. His other works include Living on the Devil’s Doorstep, Learning to Love People You Don’t Like, Follow and Leading Like Jesus.

“Thousands of people from all over the world can attest to the profound impact Floyd had on their lives,” said Sally. “While he has gone to be with the Lord, his voice is not silent. His books and recorded teachings will continue to inspire and challenge. His legacy continues. … The day Floyd became ill he spoke to a group of All Nations students. In what turned out to be a prophetic word, he asked them, ‘If I can’t continue, will you finish the race?’ His prayer would be that thousands will heed the call to go to the nations.”

Due to the pandemic there will be no in-person services. A memorial video tribute will be shared at a later date.