Top Posts
Colorado football coach Sanders’ unabashed faith
There’s A Light That Enters Houses With No...
Knowing the One Who Always Keeps His Word
Pregnancy Resource Centers Fight For Life Amidst Opposition
This World is Not Our Home
Lessons Learned From a Gingerbread House
Let There Be Peace on Earth
‘I Wanna Dance’ movie: Whitney Houston’s success and...
Fact Finding, Sight Seeing, and Prayer Walking
Kidney donation led to 8 life-saving surgeries
Home Tags Posts tagged with "Andrew Brunson" 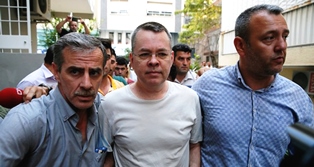 IZMIR, TURKEY (ANS – August 1, 2018) — The BBC is reporting that the US has imposed sanctions on Turkey’s justice and interior ministers over the continued detention of pastor Andrew Brunson.

The evangelical from North Carolina has been held for nearly two years over alleged links to political groups.

“We’ve seen no evidence that Pastor Brunson has done anything wrong.”

She added that the two Turkish ministers had both played “leading roles” in the arrest of the US pastor.

“As a result, any property or interest in property of both ministers within US jurisdiction is blocked and US persons are generally prohibited from engaging in transactions with them,” she said.

The BBC continued by saying that the US treasury department later said in a statement that Turkey’s Justice Minister Abdulhamit Gul and Interior Minister Suleyman Soylu were targeted because they “serve as leaders of Turkish government organizations responsible for implementing Turkey’s serious human rights abuses.”

The Turkish foreign ministry has previously described US demands to release Mr. Brunson as “unacceptable.”

Who is Andrew Brunson? (BBC) 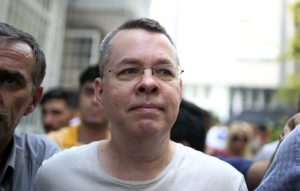 Mr. Brunson is a long-term resident of Turkey. He lived with his wife and three children while working as the pastor of the small Izmir Resurrection Church, which had a congregation of about two dozen.

The authorities accuse him of having links with the outlawed Kurdistan Workers’ Party (PKK) and the Gulenist movement, which Turkey blames for a 2016 failed coup.

Mr. Brunson has denied charges of espionage but faces up to 35 years in jail if found guilty.

He was moved into house arrest last week for health reasons, but US Secretary of State Mike Pompeo said this was not enough.

“We have seen no credible evidence against Mr. Brunson,” Mr. Pompeo tweeted at the time.

Turkey’s foreign ministry said it had shared “necessary information” with the US, but insisted the case should be left with its judiciary.

What is Turkey’s motivation? (BBC)

Mr. Brunson is one of 20 Americans who was charged after the coup two years ago, according to the New York Times.

He blames Pennsylvania-based Muslim cleric Fethullah Gulen for the attempt, but Mr Gulen denies any involvement.

Turkey wants the US to agree to his extradition. President Erdogan has indicated he would swap the pastor for “the priest” (Mr. Gulen).

“US support for Kurdish forces fighting the Syrian civil war has also angered President Erdogan, who views them as an extension of the PKK,” said the BBC.

“The PKK – a Turkish-Kurdish rebel group fighting for autonomy since the 1980s – is considered a terrorist group by Turkey and the US.”