Top Posts
Colorado football coach Sanders’ unabashed faith
There’s A Light That Enters Houses With No...
Knowing the One Who Always Keeps His Word
Pregnancy Resource Centers Fight For Life Amidst Opposition
This World is Not Our Home
Lessons Learned From a Gingerbread House
Let There Be Peace on Earth
‘I Wanna Dance’ movie: Whitney Houston’s success and...
Fact Finding, Sight Seeing, and Prayer Walking
Kidney donation led to 8 life-saving surgeries
Home Tags Posts tagged with "Andy Warhol" 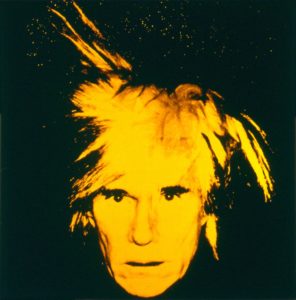 ALBUQUERQUE, NEW MEXICO (ANS)—According to polls, Super Bowl 2019 will be the most watched program on American television.  As the pollsters calculate numbers, viewers will reflect on commercials and the game (a snoozer, if you ask me).  Even with some fine commercials, one stood head and shoulders above the rest:  Burger King’s use of Andy Warhol eating a hamburger, with an #EatLikeAndy hashtag to boot.

As one commentator stated, the commercial is “blowing our mind.”

The clip was originally filmed for a 1982 experimental movie by Danish filmmaker, Jorgen Leth, entitled 66 Scenes From America.  Now over 35 years later, the commercial is the most talked about Super Bowl offering, showing that Warhol is as relevant today as he was when he died in 1987. 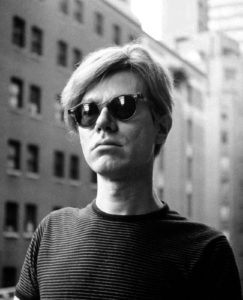 What is it about Andy Warhol that keeps people enamored with his life and death? I know I can’t help but follow all the various incidences from the Warhol files: be it the new Whiney Museum retrospective of his artwork, the legal issues over his artwork, the final unpacking of the time capsule boxes, or the various exhibits that spatter across the country, taking new—and re-issued—looks at this art and life, such as 2015’s  The 13 Most Wanted Men.

Yeah, I know, it’s part of the allure of Andy Warhol—the man who said all people would have 15 minutes of fame (Andy has far surpassed that delineation).  Andy is once again the talk of the town. The fact is, people love him or hate him. But we can’t dismiss that he’s entrenched in our culture like the products and people he painted.

And with the Burger King commercial, the Warhol enigma continues.  Why? 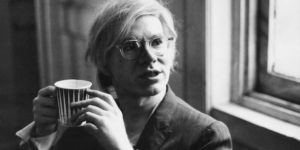 A few years ago, I read a book by the philosopher, Arthur Danto, entitled, Andy Warhol (Icons of America). In this book, Danto gave a philosophical construct on the greatness of Andy’s art, helping folks see Warhol’s brilliance as an artist and cultural critic. I enjoyed the book. Danto argues that “what makes him an American icon is that his subject matter is always something that the ordinary American understands: everything, or nearly everything he made art out of came straight out of the daily lives of very ordinary Americans. . . The tastes and values of ordinary persons all at once were inseparable from advanced art.”

Put another way: Warhol used items Americans understand—the stuff of our culture. And because of his use of items we recognize, Warhol helped re-define what art actually is, a re-shaping of art itself. 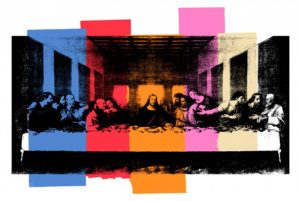 As my interest in Warhol increased, I uncovered two fascinating aspects of his life:  one, he was a religious man (he never disowned his Catholic faith, making sure he went to Church often), and, two, prior to his death, he focused on images of Jesus.

And though many can argue over aspects of his life, one cannot shrug off that Warhol, indeed, was a seeker, someone fascinated by Jesus, and hopefully, in love with Him as well. As Jane Daggert Dillenberger in her book, The Religious Art of Andy Wahol notes, “Warhol made over 100 paintings, drawings, and prints based on Leonardo da Vinci’s The Last Supper.”  Furthermore, Andy Warhol kept secret his lifelong church attendance and his personal piety,” such as regular outreaches for the homeless. And in a documentary movie about Warhol, there is deep connection discussed between his faith and art. In short, Warhol was a believer. 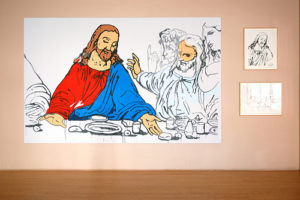 So rather than focus on Andy the eater—as the Burger King commercial suggests, we should focus on Andy the seeker. As Jesus said, “Ask and it will be given to you; seek and you will find; knock and the door will be opened to you.” Let’s pray Andy’s seeking found an open door—which in God’s love, he probably did.