Top Posts
Colorado football coach Sanders’ unabashed faith
There’s A Light That Enters Houses With No...
Knowing the One Who Always Keeps His Word
Pregnancy Resource Centers Fight For Life Amidst Opposition
This World is Not Our Home
Lessons Learned From a Gingerbread House
Let There Be Peace on Earth
‘I Wanna Dance’ movie: Whitney Houston’s success and...
Fact Finding, Sight Seeing, and Prayer Walking
Kidney donation led to 8 life-saving surgeries
Home Tags Posts tagged with "Apostolic Movement"

HAVANA, CUBA (ANS) – A Cuban pastor has been told he risks imprisonment if his church goes ahead with a planned women’s conference.

Christian Solidarity Worldwide (CSW) says Alain Toledano Valiente, a leader in the Apostolic Movement, was summoned to appear at the La Motorizada Unit #3 Police Station on August 7, where he was told by the police station commander that if his church went ahead with a planned women’s event on August 8, he would be charged with the crime of disobedience and would risk imprisonment. 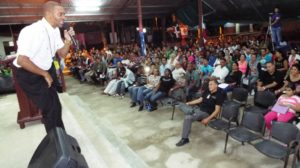 Toledano Valiente told CSW that he received the summons on the evening of August 7 and was told to present himself to the police at 10am on August 8. No reason was given for the summons. Upon arriving at La Motorizada Unit #3 Police Station, he was interrogated for almost three hours by the unit commander.

CSW said despite the threats against him, Toledano Valiente indicated that the church would go ahead with the ‘Deborah Conference’ which aims to empower women.

In July, Toledano Valiente was stopped by government agents and blocked from boarding a flight to the US to attend the Ministerial on International Religious Freedom. He is still officially banned from leaving Cuba and his right to move freely within the country is also restricted.

“It looks like the regime is planning to invent criminal charges to bring against me in order to imprison me, just as they have done in the past with other pastors,” Toledano Valiente told CSW.

“I have had to deal with the fury and the hatred of the communist regime in many different ways and I think now I have to deal with dirty tricks on their part. I continue to be prohibited from travelling and I don’t think they are interested in freeing me. This is the price I have to pay in this country.

“I have had to cancel many national and international events because of this restriction. They want to suffocate me, trying to pin me down into a tight space to eliminate both my voice and myself, a pressure that wants to destroy both the church and me.”

CSW Head of Advocacy Anna-Lee Stangl said: “Concerns that weakened protections for freedom of religion or belief in the new constitution indicated a harder line from the new government appear to be validated. There is no justification for stripping religious leaders, who have committed no crime, of their right to travel or to arbitrarily ban churches from holding special religious events.

“We call on the Cuban government to immediately cease its harassment Alain Toledano Valiente and other church leaders and to allow these peaceful religious events and initiatives to take place without interference from the state.”

The author of this story, Michael Ireland, is a self-supported media missionary with ANS. Click here to support him as a missionary journalist.
August 12, 2019
FacebookTwitterPinterestEmail