Top Posts
Colorado football coach Sanders’ unabashed faith
There’s A Light That Enters Houses With No...
Knowing the One Who Always Keeps His Word
Pregnancy Resource Centers Fight For Life Amidst Opposition
This World is Not Our Home
Lessons Learned From a Gingerbread House
Let There Be Peace on Earth
‘I Wanna Dance’ movie: Whitney Houston’s success and...
Fact Finding, Sight Seeing, and Prayer Walking
Kidney donation led to 8 life-saving surgeries
Home Tags Posts tagged with "Archipelago" 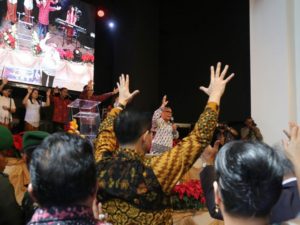 Many Christians are attending the Pentecostal Church in Indonesia (GBI).

JAKARTA, INDONESIA (ANS – September 8, 2018)– Millions of Indonesians are becoming Christians, often secretly, but authorities refuse to recognize this trend in the world’s largest Muslim nation, several evangelical leaders have told BosNewsLife, a news partner of ASSIST News Service (ANS). At least three to four million Indonesians “turned to Christ” over the past year, according to  Christian officials with very close knowledge about the situation.

All spoke on condition of anonymity as the issue of conversion remains highly sensitive in Indonesia, where dozens of people have been jailed or even killed on accusations of “blasphemy” against Islam. “Even if you see someone dressed as a Muslim, he or she may have become a Christian,” a seasoned evangelist said.

In Jakarta, the capital, at least 40-50 percent of residents may be ‘Christian,’ according to church group estimates. It remains unclear how many of them are ‘born-again,’ a move that involves accepting Jesus Christ as “personal Lord and Savior.” Being “born again” is seen by many pastors here as the essence of Christianity.

Muslims account for roughly 87 percent of Indonesia’s 260 million people, said the U.S. Central Intelligence Agency (CIA), but the agency cited government estimates from 2010. Also, it has now emerged that the number of Christians including Protestants (7 percent) and Catholics (2.9 percent) have been steadily growing. “We expect half of Indonesians to be ‘Christian,’ at least in name, within five to 10 years”, a senior church leader and evangelist told BosNewsLife. That could mean some 130 million Indonesians identifying themselves as ‘Christian’ by 2028.

“There is a revival in Indonesia,” added the evangelist who has traveled through the most remote areas of Indonesia. Some “accepted Jesus Christ” as Lord because they saw or experienced miraculous healings during evangelistic outreaches, BosNewsLife learned in interviews.

Christians, including former Muslims, also cite disappointment about Islam’s strict regulations and perceived lack of freedom as reasons to convert. However, opposition to Christianity encouraged by a growing number of Islamic militants and hardliners in Indonesia contributed to religious tensions, even within government institutions.

Last year, the Christian governor of Jakarta was sentenced to two years in jail for blasphemy in a case that critics claimed undermined Indonesia’s reputation for practicing a moderate form of Islam. Governor Basuki “Ahok” Tjahaja Purnama has appealed the guilty verdict and sentence, after the five-judge panel, said he was “convincingly proven guilty of blasphemy.”

The governor argued that people were being deceived if they believed the Koran forbids Muslims from voting for non-Muslims. He also came under fire for often citing the Bible and his Christian faith in speeches, Christians said.

“The case with the governor shows that being a Christian can undermine your career in Indonesia today,” a dedicated Christian woman and church worker told BosNewsLife. “That is perhaps why many Christians may even remain Muslim on paper,” she added referring to religious preferences on identity cards and other documents.

The 43-year-old woman, whom BosNewsLife choose to call ‘Victoria’ for safety reasons, said being a Christian may involve family frictions. “I could have married a rich Muslim man who offered me houses and cars. However, that would mean converting to Islam. I declined as Jesus Christ is number One in my life.”
PRESIDENT CRITICIZED

Indonesian President Joko “Jokowi” Widodo, who won the elections of July 2014 on a platform of renewal, has been criticized for not doing enough to tackle religious intolerance following church bombings and other ant-Christian attacks that have killed at least dozens of people in recent years. Also, with many Christians running major businesses, the Muslim president is under pressure to mend fences in what is one of Asia’s fastest-growing economies.

Requests for an interview with the Indonesian leader remained unanswered so far, but Vice President Jusuf Kalla said Indonesia’s religious freedom is “better than in other countries” and a model “for other countries to learn [religious] tolerance.”

However, the influential advocacy group Human Rights Watch (HRW) disagrees. “Kalla’s comments reflect the government’s willful disregard of both the corrosive influence of discriminatory laws that pose a clear threat to the country’s religious minorities, as well as official actions to reinforce those laws,” said Phelim Kine, the deputy director at HRW’s Asia Division.

He said the government made it clear that Indonesia’s “dangerously ambiguous blasphemy law, which overwhelmingly targets religious minorities, is here to stay.”

Despite these difficulties, Christians told BosNewsLife they remain hopeful about the future in this highly diverse nation. Tens of thousands Pentecostal and other evangelical congregations have already been established across the country, while more traditional churches are also active. Additionally, church workers want many to receive a Bible in one of the hundreds of local languages in modern-day Indonesia, where sophisticated kingdoms existed before the arrival of the Dutch, who colonized the archipelago but gave in to a bloody independence struggle in 1949.