Top Posts
Pregnancy Resource Centers Fight For Life Amidst Opposition
This World is Not Our Home
Lessons Learned From a Gingerbread House
Let There Be Peace on Earth
‘I Wanna Dance’ movie: Whitney Houston’s success and...
Fact Finding, Sight Seeing, and Prayer Walking
Kidney donation led to 8 life-saving surgeries
The Power of Curiosity
When Love Came Down at Christmas
A Walk of Faith Begins with a Step...
Home Tags Posts tagged with "Art Rorheim" 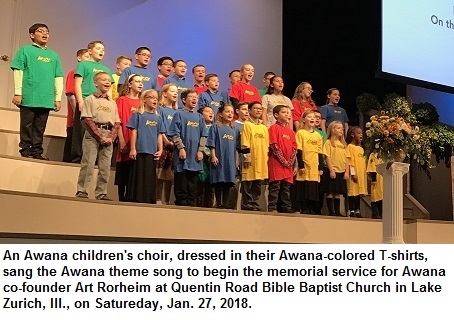 LAKE ZURICH, IL, (ANS – Jan. 29, 2018) – Before he died, children‘s ministry leader Art Rorheim, co-founder of the worldwide AWANA ministry, recorded a message detailing the Gospel and how to become a believer in Jesus Christ. 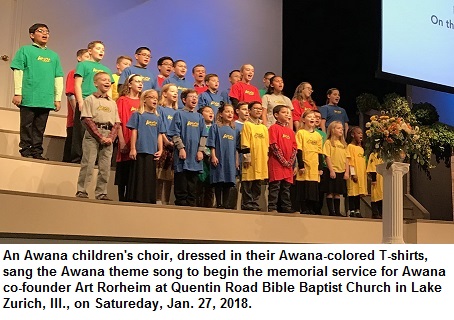 That message, which included assurance that those who give their lives to Christ are guaranteed a place in Heaven, was played at his memorial service, attended by an estimated 1,000 friends and family, where Rorheim was honored as a visionary and a hero of the faith.

Rorheim died on Jan. 5; he was 99.  The program for the service at Quentin Road Bible Baptist Church called him “an ordinary man obeying an extraordinary God.”

According to a news release from A. Larry Ross Communications (http://alarryross.com/), Rorheim, was not as well-known as contemporaries in ministry, such as Billy Graham, nevertheless had a far-reaching impact, helping Awana grow from a club in Chicago in the 1940s to a global organization today. It reaches 4 million children weekly.

“All around the world, children in 120 countries know the Gospel,” Valerie Bell, Awana’s CEO, said. “When God broke Art’s heart for children, He gave the Church a tremendous gift.”

Rorheim recorded a message before his death that was played at the service, including a presentation of the Gospel message, telling anyone in the congregation how to accept Christ and be assured that they would go to heaven.

Rev. Jim Scudder Jr., senior pastor at Quentin Road, welcomed guests to open the service and noted that “the heartbeat of Art Rorheim” was the Gospel.

Then the Quentin Road children’s choir sang the Awana theme song. Rorheim selected all the music at the service, including classic hymns such as “To God Be the Glory,” “Blessed Assurance” and “When We All Get to Heaven.” Special guest artists Eric Boyce and the quartet Evidence of Grace performed, the latter of which sang a David Clydesdale arrangement of “Blessed Calvary,” orchestrated specifically for this service.

Rorheim, the son of Norwegian immigrants, visited more than 40 countries to share the Gospel, equipping leaders to reach kids for Christ. He continued to travel for the ministry and come into the office at least one day a week well into his 90s. Awana missionaries from Argentina, Canada, India, Kenya, Nepal, South Korea, Ukraine, Venezuela, Zambia and Zimbabwe attended the service.

Rorheim retired as executive director in 1990. He then served as Awana president until 1999 before assuming the role of co-founder/president emeritus.

Dr. James Scudder, Sr., who founded the church, noted that Rorheim asked him 12 years ago to speak at his memorial service.  “I’ve been sweating it ever since,” he said. “I loved him, but I can’t do justice to him.”

Rorheim’s wooden casket was made by an inmate on death row at the Louisiana State Penitentiary at Angola who became a Christian in prison but was executed for his crimes. Rorheim visited Angola and helped found a ministry to inmates and their families, Awana Lifeline.

To arrange an interview with a spokesperson for Awana, please contact Steve Yount of A. Larry Ross Communications at 469.438.7011 or steve@alarryross.com