Top Posts
Knowing the One Who Always Keeps His Word
Pregnancy Resource Centers Fight For Life Amidst Opposition
This World is Not Our Home
Lessons Learned From a Gingerbread House
Let There Be Peace on Earth
‘I Wanna Dance’ movie: Whitney Houston’s success and...
Fact Finding, Sight Seeing, and Prayer Walking
Kidney donation led to 8 life-saving surgeries
The Power of Curiosity
When Love Came Down at Christmas
Home Tags Posts tagged with "arts and entertainment" 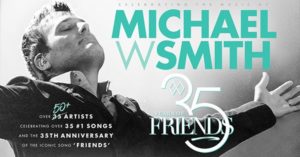 Michael W. Smith will commemorate 35 years in the music industry with a star-studded concert—35 years of Friends: Celebrating The Music Of Michael W. Smith on Tuesday, April 30 at Bridgestone Arena in Nashville, Tennessee. The evening event will feature many of the biggest names in music to pay tribute to Smith and his songs.

Promoted by Outback Concerts and produced by Tony Conway of Conway Entertainment Group, concertgoers will experience more than 40 artists from a variety of musical genres, performing a set list that will include many of Smith’s 35 #1 hit singles.

Smith has earned 45 Dove awards, three Grammy awards, and an American Music award. He has been inducted into the Gospel Music Hall of Fame and has sold more than 15 million albums. AWAKEN: The Surrounded Experience, Smith’s latest release, came out earlier this year.

Smith has also given back, globally. He has helped raise funds to battle AIDS in Africa; started Rocketown, a safe haven for young people in Tennessee, and has helped more than 70,000 children through Compassion International. Additionally, Smith has written several best-selling books, including Old Enough To Know and Friends Are Friends Forever.

For the latest news and tour dates, go to www.michaelwsmith.com.  Tickets for 35 years of Friends: Celebrating The Music Of Michael W. Smith are available at www.ticketmaster.com and the Bridgestone Arena box office.