Top Posts
Colorado football coach Sanders’ unabashed faith
There’s A Light That Enters Houses With No...
Knowing the One Who Always Keeps His Word
Pregnancy Resource Centers Fight For Life Amidst Opposition
This World is Not Our Home
Lessons Learned From a Gingerbread House
Let There Be Peace on Earth
‘I Wanna Dance’ movie: Whitney Houston’s success and...
Fact Finding, Sight Seeing, and Prayer Walking
Kidney donation led to 8 life-saving surgeries
Home Tags Posts tagged with "Asylum Case"

PAKISTAN (ANS – Nov. 23, 2018) — The family of Asia Bibi, the Christian woman who spent eight years on death row in Pakistan for blasphemy before being acquitted three weeks ago, claim they are being hunted by extremists going house to house with their photographs to try to track them down. 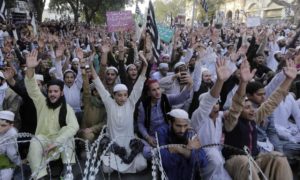 Demonstrators protest against the release of Asia Bibi.

According to a report in The Guardian newspaper, Bibi’s family have been in hiding since her acquittal by the country’s supreme court. She is in protective custody as part of a deal between the government and a hardline Islamic party, under which violent protests were called off while a review of the court ruling was undertaken.

Bibi’s lawyer, relatives and supporters have appealed for the family to be given asylum in a European or  North American country. Several countries have indicated their willingness to offer a home, but nothing concrete has emerged.

John Pontifex, of Aid to the Church in Need UK (ACN), which has campaigned on Bibi’s behalf since she was convicted and sentenced to death in 2010, said he had been in almost daily contact with her family over the past three weeks and they were very frightened.

“They have told me that mullahs had been reported in their neighbourhood going from house to house showing photos of family members on their phones, trying to hunt them down,” he told The Guardian.

Pontifex said the family’s faith was “sustaining them in this time of acute danger.” He added: “They say that if they are not allowed to find a future outside Pakistan, the fear is that sooner or later something terrible might happen to them.”

Bibi’s lawyer, who fled Pakistan shortly after the court ruling saying his life was in danger, said this week that talks on asylum were under way with several European countries. “I hope the western world is trying to help her,” Saiful Malook told reporters in Frankfurt.

Canada, Spain and France are thought to have offered asylum to Bibi. Germany and Italy have reportedly held talks with Pakistan on the issue.

The UK government has declined to answer questions about whether it is considering an offer of asylum, saying it does not want to further endanger Bibi and her family.

The former foreign secretary Boris Johnson and many other MPs and peers have called for the UK government to act. Some reports have suggested that the government fears a backlash among British Muslims of Pakistani heritage if it offers Bibi asylum.

On Tuesday, Sayeeda Warsi told the House of Lords: “There have been press reports that Asia Bibi, if granted asylum in the United Kingdom, would potentially not be safe from some communities here … As someone who is deeply connected to British Muslim communities, I assure her that they are fully supportive of any asylum claim that Asia Bibi may have and that our country may afford her, and that she would be supported as she would be by all other communities in this country.”

After Bibi’s acquittal, Islamic hardliners called for her and the judges in the case to be killed, and they mounted protests that brought cities to a standstill. Pakistan’s prime minister, Imran Khan, has been accused of capitulating to their demands.

Bibi, a farm labourer, was accused by Muslim villagers of insulting the prophet Muhammad in a row over a cup of water. The supreme court judgment said there was no evidence to support the charge.