Top Posts
Colorado football coach Sanders’ unabashed faith
There’s A Light That Enters Houses With No...
Knowing the One Who Always Keeps His Word
Pregnancy Resource Centers Fight For Life Amidst Opposition
This World is Not Our Home
Lessons Learned From a Gingerbread House
Let There Be Peace on Earth
‘I Wanna Dance’ movie: Whitney Houston’s success and...
Fact Finding, Sight Seeing, and Prayer Walking
Kidney donation led to 8 life-saving surgeries
Home Tags Posts tagged with "Auschwitz babies"

This Polish midwife was ordered to murder all the babies she delivered at Auschwitz. With God’s help she was able 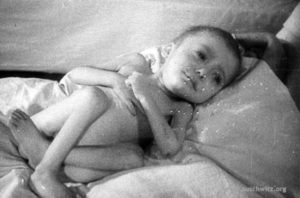 to rescue a few from certain death at the hands of her Nazi overlords.

Stanislawa Leszczyńska was born in Lodz, a town situated in the heart of Poland. When the Nazis invaded her country in 1939 this wife, mother and midwife joined the Polish resistance, according to a report by Aleteia.

As part of her work with the underground, she provided fake documents and food for those in Jewish ghettos.

After her family’s efforts were discovered by the Gestapo, she and her daughter were sent to Auschwitz. Her husband and oldest son escaped, but she would never see her spouse again; he was killed in later fighting during the war.

At Auschwitz, Stanislawa volunteered as a midwife. Many women were executed when their pregnancy was discovered, but others managed to continue their pregnancy until delivery.

Stanislawa was sent to work in the maternity ward, which was a “set of filthy barracks that was less a place to care for pregnant women than a place to usher them into death,” according to History.com

The Nazi female collaborators who managed the ward, “Sister” Klara and “Sister” Pfani, announced newborns were “stillborn,” – even if alive. Horrifically, they proceeded to drown the babies in buckets in front of the new mothers.

(As an aside, it is difficult to imagine infanticide is currently being considered by legislators in the U.S., who are openly talking about killing babies during and after delivery.)

When Stanislawa was told she must murder the babies after their delivery, she feared God more than man and refused, echoing the sentiment of midwives recorded in the book of Exodus:

The king of Egypt said to the Hebrew midwives, whose names were Shiphrah and Puah, “When you are helping the Hebrew women during childbirth on the delivery stool, if you see that the baby is a boy, kill him; but if it is a girl, let her live.” The midwives, however, feared God and did not do what the king of Egypt had told them to do; they let the boys live. (Exodus 1:15-17 NIV)

Stanislawa’s intransigence was rewarded with a beating by Klara, but she still did what she could to keep as many babies alive as possible.