Top Posts
Knowing the One Who Always Keeps His Word
Pregnancy Resource Centers Fight For Life Amidst Opposition
This World is Not Our Home
Lessons Learned From a Gingerbread House
Let There Be Peace on Earth
‘I Wanna Dance’ movie: Whitney Houston’s success and...
Fact Finding, Sight Seeing, and Prayer Walking
Kidney donation led to 8 life-saving surgeries
The Power of Curiosity
When Love Came Down at Christmas
Home Tags Posts tagged with "Awardwinning journalist" 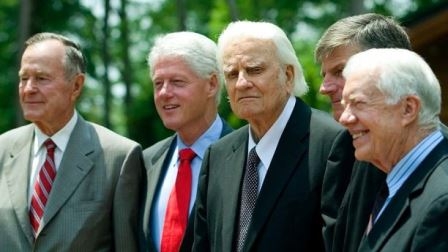 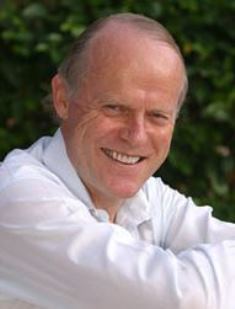 PURCELLVILLE, VA (ANS – Feb. 23, 2018) – Dr. David Aikman, the award-winning journalist, formerly with Time Magazine, has movingly reflected on the passing of evangelist Billy Graham early on Wednesday at the age of 99.

Writing on his Facebook page, Aikman said, “I had the great privilege of meeting Billy Graham and interviewing him several times while a reporter for Time magazine. I was especially fortunate to travel to many places all over the world where he had preached and to talk to people who had come to know him very well.

“With two colleagues, we put together a video profile for the TV series “Great Souls,” which was finally marketed through public television. I was privileged to be invited into his home in North Carolina, and to become acquainted, just a little bit with him and his amazing wife Ruth, and then with his sons and daughters.” 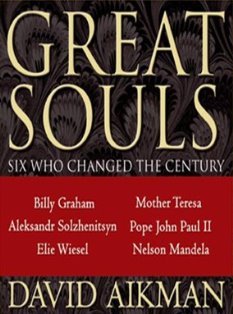 He said all of this was “very important” when he was writing his insightful book Great Souls: Six Who Chnged The Century, in which one the of the chapters was an account of Graham and the moral quality of his life, and then his relatively recent biography, Billy Graham: his life and influence. (In Great Souls, through thoughtful profiles, Aikman shows how these rare examples of moral and spiritual excellence each embodied a specific virtue: Billy Graham — salvation, Nelson Mandela — forgiveness, Aleksandr Solzhenitsyn — truth, Mother Teresa — compassion, Pope John Paul II — human dignity, and Elie Wiesel —remembrance.)

Aikman went onto to say in his Facebook page, “The one moral quality which shone more brightly than any others with Graham was his personal humility. On one occasion when some clergy objected to his holding a meeting at a specific venue in some English city as an evangelist in the 1940s — they objected to his principle of a person making an individual decision to receive Christ — he privately met with each of the objecting clerics and apologized for upsetting them. They all instantly were won over by the example of his gracious humility.

“Back in the US, he CBS anchor Dan Rather had criticized him heavily for accepting an invitation to a Moscow peace conference in 1982. But in retrospect, the visit opened up invitations for Graham to reach into all of the countries of Eastern Europe that later turned against communism in 1989. Graham had sensed that such a movement would come to pass. To the considerable credit of Dan Rather, he admitted later, ‘I was wrong and Graham was right big time.’

“One of Graham’s most remarkable moral successes throughout his life was to resist the temptation of financial success. When a prominent political fundraiser told him in the 1950s that if he were willing to run for president, there would be $1 million in his bank account the following day, Graham turned him down flat. He joked about it later, saying: “Ruth told me that if I ran for the presidency I would have to do it as a divorced man.”

Graham was revolted by the vulgar language in the Watergate Tapes 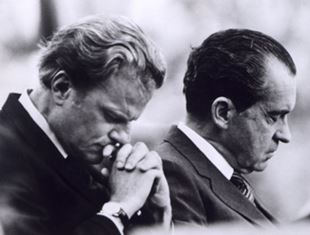 Dr. Aikman then stated, “Graham was personally revolted by the vulgar language that came out of the mouth of his good political friend Pres. Richard Nixon during the times of the Watergate tapes. He had never seen that side of Nixon during his long friendship with the politician. But when Nixon was hospitalized with an illness after Watergate, Billy Graham and Ruth paid for a plane to fly over the hospital in a warm salute to Nixon.

“When Nixon resigned, his successor Pres. Ford was bitterly criticized for granting him a pardon. It might have cost Ford the election against Jimmy Carter. But one of the voices recommending a pardon for the sake of bringing peace back to politics in the US was that of Billy Graham.”

Aikman concluded by saying, “In today’s toxic political and cultural atmosphere in the United States, extending the grace of forgiveness to others is one of the most prominent missing public virtues. How much all of us Americans will miss the example of Billy Graham over the next few years.”

Further note: Billy Graham will finish the same way he started — under a large white tent in front of thousands of people. Graham’s private funeral service will be held Friday, March 2, at noon in a canvas tent set up near The Billy Graham Library in Charlotte, North Carolina. 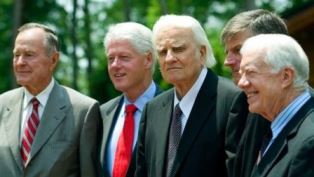 The world-famous evangelist will be buried next to his wife Ruth, who died in 2007, at the foot of the cross walkway at the Billy Graham Library.

Photo captions: 1) Dr. David Aikman has paid tribute to Billy Graham. 2) Front cover of Great Souls. 3) Billy Graham praying at one of his crusades with Richard Nixon. 4) Former U.S. Presidents George H. W. Bush, left, and Bill Clinton, Billy Graham, his son, Franklin, and former President Jimmy Carter, stand together. Graham was a spiritual adviser to each of the men. (Reuters). 5) Dan Wooding chats with Billy Graham and his wife, Ruth, at their home in Montreat, North Carolina.

About the writer: Dan Wooding, 77, is an award-winning author, broadcaster and journalist who was born in Nigeria of British missionary parents and is now living in Southern California with his wife Norma, to whom he has been married for nearly 55 years. They have two sons, Andrew and Peter, and six grandchildren who all live in the UK. He is the author of some 45 books and has two TV programs and one radio show in Southern California. He began his career in journalism back in 1968 with The Christian, a London-based newspaper that had been bought by Billy Graham’s ministry. He later worked with Mr. Graham as a writer in Russia, Germany and Puerto Rico. He also wrote the cover story for the Saturday Evening Post on Billy Graham and his son, Franklin.