Top Posts
There’s A Light That Enters Houses With No...
Knowing the One Who Always Keeps His Word
Pregnancy Resource Centers Fight For Life Amidst Opposition
This World is Not Our Home
Lessons Learned From a Gingerbread House
Let There Be Peace on Earth
‘I Wanna Dance’ movie: Whitney Houston’s success and...
Fact Finding, Sight Seeing, and Prayer Walking
Kidney donation led to 8 life-saving surgeries
The Power of Curiosity
Home Tags Posts tagged with "Barbara Bush" 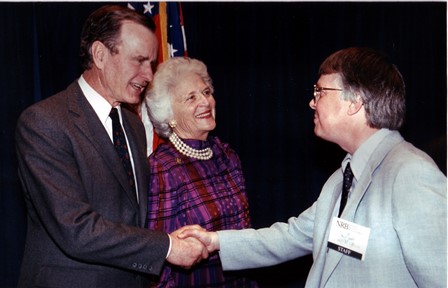 WASHINGTON, DC (December 1, 2018) — Not long after moving to the United States, I became close friends with Ed Steele, a broadcaster and PR supremo, who loved playing practical jokes on me.

So, when I was checking into the hotel for my first National Religious Broadcasters (NRB) Convention in Washington, DC, and the clerk handed me a note from him, I read it. smiled and tucked it into my pocket and went to my room.

After unpacking, I re-read it. “Dear Dan, please come to the hotel ballroom to meet George and Barbara Bush. Your friend, Ed.”

Having nothing else to do, I decided to check out his invitation, and I was amazed to see that it wasn’t a joke after all. For there were the Bush’s being introduced to various delegates by NRB President, Dr. Ben Armstrong. Ronald Reagan’s Vice President, George H.W. Bush, was now running for president and needed the support of America’s religious broadcasters.

So, I joined the line and soon found myself in front of the couple. I was so embarrassed, that I blurted out, “Mr. and Mrs. Bush. I am not sure why I have been introduced to you, as I’m British, and I can’t vote for you.” They smiled patiently, shook my hand, and moved onto to someone who could vote for him.

Shortly afterwards, I received a package from the White House enclosing this photo and signed by them both.

Some years later, Ed called me and asked if I’d like to accompany him to the Bush’s home at Kennebunkport, Maine, where he was hosting Israeli Prime Minister Yitzhak Rabin for a special event with him.

We were checked out by the FBI and cleared to join the White House Press Corp, and as President Bush and Rabin stood just a few feet away, I had no idea that some time later, Rabin would be assassinated in Israel by an Israeli ultranationalist named Yigal Amir, who radically opposed Rabin’s peace initiative and particularly the signing of the Oslo Accords.

With a friend like Ed Steele, I never knew what was going to happen next, which included several media trips to Israel.

I also discovered that Barbara Bush was quite a humorist, and once when I was at Houston International Airport with a team from He Intends Victory on our way to another NRB Convention, we spotted her there waiting for a friend with Secret Service protection. I joined some of the girls in the team and we approached the former First Lady.

“Are you Barbara Bush?” one of them asked her, to which Mrs. Bush replied with a twinkle in her eyes, “Oh no, dear. She’s much older than me.”

Now we have the news that former US President George H.W. Bush died at age 94 on November 30, 2018, in Houston, and Barbara went before him on 17 April, 2018. What a wonderful couple that brought both dignity and joy to the most powerful job in the world. I, for one, will miss them both!