Top Posts
Knowing the One Who Always Keeps His Word
Pregnancy Resource Centers Fight For Life Amidst Opposition
This World is Not Our Home
Lessons Learned From a Gingerbread House
Let There Be Peace on Earth
‘I Wanna Dance’ movie: Whitney Houston’s success and...
Fact Finding, Sight Seeing, and Prayer Walking
Kidney donation led to 8 life-saving surgeries
The Power of Curiosity
When Love Came Down at Christmas
Home Tags Posts tagged with "Barnabas Israel"

JERUSALEM, ISRAEL (ANS) — Barnabas Israel www.barnabasisrael.org is an NGO based in the Negev that provides humanitarian aid and educational support to Bedouin families from unrecognised villages.

Barnabas Israel is part of a larger organisation called Barnabas Fellowship of Churches, based in the UK and established in more than 10 countries around the world mainly planting churches.

According to the ministry, in an article on Kehila News, for those who are less familiar with the Bedouin community it is important to note that they are a minority within the Arab community, and they make up 3.5 % of the total Israeli population. 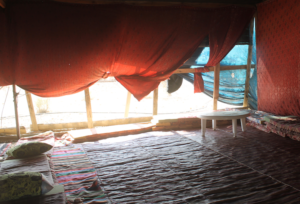 The ministry says that prior to the formation of the State of Israel, they lived in the Negev as semi-nomads. Around 3 decades ago the government encouraged Bedouins to relocate to 6 towns situated in the south, but many of them refused to do so. These are the so called unrecognised villages. They are spread throughout the Negev, and hardly have any basic services such as health care, electricity, drinking water and education. They are isolated from civilisation without being able to build any further and have very limited access to public transport. Many live in extreme poverty and do not feel a part of society.

The Bedouin are mainly Sunni Muslims and very devoted. Their places of origin can vary from Egypt to Saudi Arabia and even though many of them are Israeli citizens, some come from the West Bank originally.

The local NGO’s main focus is on a specific tribe originating from Egypt that has settled in the Arad area ans the complexity and variety in the backgrounds, together with later interchange of marriages make it challenging to pinpoint an accurate origin to the tribes scattered in the Negev.

The ministry says that around less than a decade ago, the door opened to establish a kindergarten amongst one of these families called Abu Juda. The message has been spreading ever since. It started off as a project geared towards children, but since 2013 it became a family-oriented work through an extensive process of building trust and getting to know the families on a one to one level. Through doing so, Barnabas Israel decided to focus on the pillars of the family: the women who are neglected and wounded. The pioneer work amongst them started through Hebrew, Arabic and English lessons.

Barnabas Israel says that given their deprived intellectual development, it is an ongoing challenge to share the Gospel with a people group that is bound by fear and constraint.

Since June 2017, the ministry has partnered with a Christian humanitarian aid organisation delivering food to families, and miraculously received second hand clothes from all kinds of sources. The warehouse is located in the Artist Quarter in Arad.

Barnabas Isarel says: “Our work is a partnership with the local Congregation in Arad, who are ‘behind the scenes,’ providing hands on support as well as prayer and encouragement and the women’s program has been running since 2013, where in the context of ‘Crafts making’ they hear Christian principles and get to learn and experience God’s Love.”

In the afternoon, there is a children’s club where they receive assistance with their homework as most mothers are illiterate.

Barnabas believes it is highly important for this people group to come to the Lord, given the fact that the patriarchs of our faith were Bedouins.

Abraham, Isaac and Jacob were Bedouins as they were initial inhabitants of the Holy Land. Not only that, but also there are hardly any organisations that focus on reaching out to this people group in the area.

The ministry says: “Embarking on a pioneering venture is not always easy, as there are no parameters, formulas or people who have paved the way before us. There are no books written on how to reach this people group, so as we develop on a daily basis, it is somehow writing the pages of a new book. Engaging with this minority group can be an extensive process, and that is when the Lord’s grace comes to live through the workers and the volunteers ability to do so.”

It adds: “Due to their primitive culture, they tend to be hostile and dubious towards newcomers, however we have witnessed through hardship and endurance that the team visiting can be the ‘event’ of the week. It is a joy to share that those who have met Lord through the work need to be in our prayers. As the body of the Messiah, we want to invite you to partner with the Holy Spirit in HIS love, passion and purpose for the salvation of this minority group.”