Top Posts
Colorado football coach Sanders’ unabashed faith
There’s A Light That Enters Houses With No...
Knowing the One Who Always Keeps His Word
Pregnancy Resource Centers Fight For Life Amidst Opposition
This World is Not Our Home
Lessons Learned From a Gingerbread House
Let There Be Peace on Earth
‘I Wanna Dance’ movie: Whitney Houston’s success and...
Fact Finding, Sight Seeing, and Prayer Walking
Kidney donation led to 8 life-saving surgeries
Home Tags Posts tagged with "Biblical Values"

HAVANA, CUBA (ANS) — Seven big evangelical denominations have taken a step forward to create their own association as they don’t feel represented by the officially approved Council of Churches of Cuba (CIC).

The evangelical leaders of 7 Cuban evangelical denominations gathered in the Methodist Canaan centre to found the Alliance of Cuban Evangelical Churches on June 11, according to the Evangelical Focus newsletter. 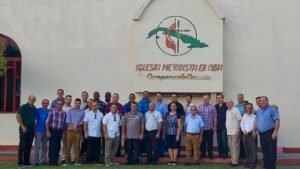 “The denominations that are part of it do not feel the Council of Churches of Cuba (CIC) represents them before the authorities and the Cuban people,” the new Alliance said in their first statement.

The Council of Churches of Cuba, started in 1941 as a council of evangelical churches, suffered several transformations.

In the 1970s, ecumenism was introduced, and later in 1989 the doors were opened to non-Christian institutions through the figure of fraternal associates – including Hebraic Community and the Yoga Self-fulfilment Association.

The CIC has progressively lost credibility among the Christian communities because it is an entity under the control of the Cuban State. The continuous interventions on the entrance and distribution of Bibles in the country has been one of the issues.

The faith groups who are not affiliated to the CIC and have formed the new AIEC “are encouraged to work together in the defence of the Biblical values,” they said.

According to Evangelical Focus newsletter, since the beginning of 2019, the Evangelical League of Cuba and other denominations have denounced the refusal of religious visas for a number of foreign guests that had been invited to church activities in Cuba. These restrictions come after the vote of the new Cuban constitution, in which the support for the official position fell to the lowest percentage in the history of the ‘Revolution.’

The position of the Cuban Christian community was key in this outcome. Despite the pressure of the Communist Party, evangelical leaders repeatedly denied their support for the constitutional draft.

Meanwhile, thousands of church members publicly expressed their rejection of the new document.

“I cannot vote in favour of something that goes against many of my principles, this is the reality,” Pastor Álida León, President of the Evangelical League of Cuba, told agency Associated Press.

In a country where the groups of the opposition are still small, the strongest part of civil society is found among Christians (both Catholics and evangelical Christians).

For this reason, in previous decades, members of these churches were not allowed to access certain higher education studies such as journalism or pedagogy.

Even now, they have no access to work in Cuban mass media. The Christian believers have called for changes in the constituent text, including: an explicit recognition of freedom of conscience, more freedom of expression and maintaining marriage as a union between a man and a woman.

The author of this story, Michael Ireland, is a self-supported media missionary with ANS. Click here to support him as a missionary journalist.
June 15, 2019
FacebookTwitterPinterestEmail